According to the US Bureau of the Census 2017 American Housing Survey, 66% of all occupied housing units in the United States had a garage or carport in 2017. Garages and carports often have access to electricity for parked vehicles, so these data are important for electric vehicle studies.

Seventy-four percent of new construction units (< 2 years old) had a garage or carport. 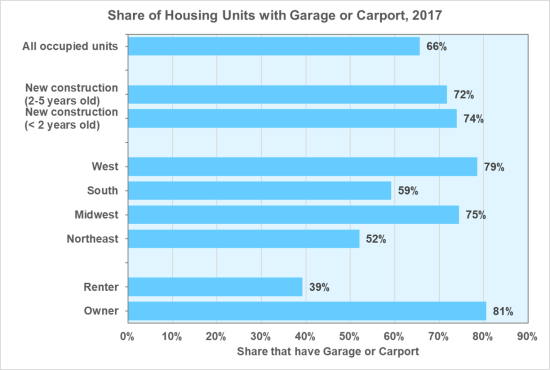 The West and Midwest regions of the country had a greater percentage of housing with garages or carports, each with 75% or greater.

For rental housing units, only 39% had a garage/carport, as compared to 81% for housing units that are owned by the residents.

A housing unit is a house, apartment, group of rooms, or single room occupied or intended for occupancy as separate living quarters.

About 66% could manage with electrified vehicles and home charging.

The other 33% could drive extended range FCEVs or use place of work or street side public chargers?