Amprius, Inc., a manufacturer and developer of high energy and high capacity lithium-ion batteries, announced that the company is supplying advanced lithium-ion cells to the Airbus Defence and Space Zephyr Program. Using Amprius’ cells, which contain a 100% silicon anode, the Zephyr S flew more than 25 days, setting a new endurance and altitude record for stratospheric flight.

This stratospheric platform can fly for months at a time and combines the persistence of a satellite with the flexibility of an unmanned aerial vehicle (UAV). The platform is expected to be used in a wide range of emerging applications, including maritime surveillance and services, border patrol missions, communications, forest fire detection and navigation.

Our collaboration with Amprius in the application of their silicon nanowire based lithium ion cells to the Zephyr has been important to the success of the HAPS program. The high specific energy of Amprius batteries enable the Zephyr to fly uninterrupted in the stratosphere which would not be possible with lower performance batteries. This will further extend the capability and utility of the Zephyr platform for our customers.

Based on its proprietary silicon nanowire technology, Amprius has demonstrated breakthrough performance in energy density and cycle life. Silicon anodes have much higher specific capacity compared to graphite anodes which are used in conventional lithium ion batteries. However, in particle or film structures silicon is not stable and lasts only a few recharge cycles. Amprius’ silicon nanowire structures overcome this instability and thereby enable hundreds of cycles with specific energies of over 435 Wh/kg and energy densities in excess of 1200 Wh/liter.

The silicon nanowire structure includes a metallically conductive nanowire core, metallurgically connected to the current collector. This connection is essential in creating and maintaining a stable electrical connection and mechanical structure at the electrode level, according to an Amprius presentation at the Power Sources Conference earlier this year. Each silicon wire is directly connected and does not need to rely on particle-to-particle contacts for conductivity; the silicon material remains in electrical contact over the entire cycle life of the cell.

The fast loss of electrical connectivity and changes in mechanical structure that plague the majority of other silicon technologies are virtually non-existent in the rooted silicon nanowire anodes. Moreover, this significant stability is achieved in a structure that is virtually 100% silicon, without any binder or conductive additive to dilute its active material content. 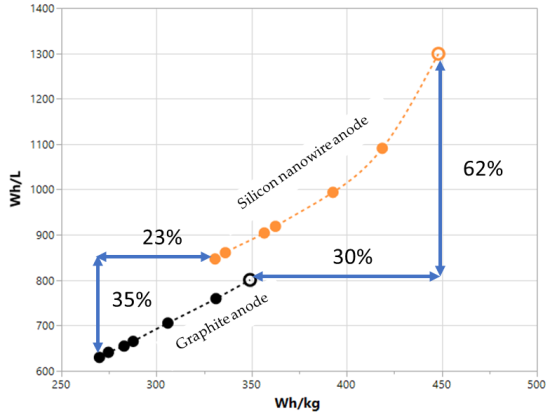 Of course, if energy density and specific energy is very high, this will still have a market.

90 % coulombic efficiency = 10 % of the electrons supplied used by parasitic reactions...
Difficult to imagine such a battery able to perform hundreds of cyclces with specific energy higher than 435 Wh/kg.
May be it was the energy efficiency instead ?

25 days in the HAPS application would be just 25 or 26 cycles. I wonder if the batteries were the limiting factor.