Home About Contact RSS GCC Twitter Newsletter
GasBuddy study: drivers are 175% more aggressive and fuel-wasting during the holidays
BioLNG Euronet consortium seeks to expand use of LNG as road transport fuel across Europe

A team led by researchers from the University of California, Berkeley and Lawrence Berkeley National Laboratory has used metal–organic frameworks (MOFs) to set a new record for hydrogen storage capacity under normal operating conditions. A paper on their work is published in the ACS journal Chemistry of Materials. 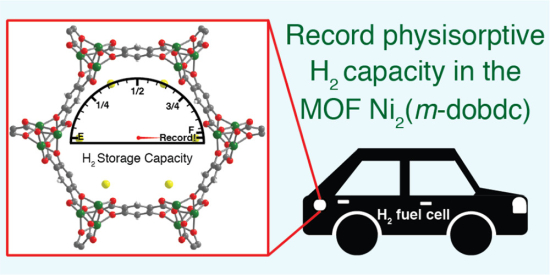 An alternative to either cryogenic or compressive storage [of hydrogen] involves the use of an adsorbent material such as a zeolite or activated carbon to boost the hydrogen density in a tank under more ambient conditions. With just two electrons and a low polarizability, H2 is capable of engaging in only weak van der Waals interactions, leading to an adsorption enthalpy that is typically on the order of −5 kJ/mol. Accordingly, adsorption sites capable of strongly polarizing H2 must be introduced to achieve sufficient densification and a reasonable driving range.

Cryo-adsorption, which entails a combination of adsorption and cryogenic storage, is one possible strategy to yield high capacities. However, the ideal situation would involve adsorption under ambient temperature conditions with a relatively low fill pressure of 100 bar or lower. Such a system would be expected to lower costs significantly because a conformable, lightweight storage vessel could potentially be used, and no on-board cooling system would be required.

Metal−organic frameworks (MOFs) are a class of materials with great potential for hydrogen storage, among other applications related to gas storage and separations. … The most promising metal−organic framework identified to date for H2 storage is Ni2(m-dobdc) (m-dobdc4− = 4,6- dioxido-1,3-benzenedicarboxylate), which was shown previously to display an H2 binding enthalpy of −13.7 kJ/mol, as measured by variable-temperature infrared spectroscopy and representing the largest value yet observed in a MOF by this method. … In this work, we investigated the hydrogen storage properties of Ni2(m-dobdc) and other related top-performing MOFs, specifically Co2(m-dobdc), Co2(dobdc), and Ni2(dobdc), under more practical conditions. Adsorption isotherms at multiple temperatures in the range of 198 to 373 K were measured to determine capacities at pressure up to 100 bar, while in situ powder neutron diffraction and infrared spectroscopy experiments were employed to probe the nature of the interactions of hydrogen within the pores of the materials.

Current hydrogen cars use expensive, bulky cooling or compression systems to store enough hydrogen for acceptable driving ranges. Jeffrey Long and colleagues wondered if they could use MOFs to store more hydrogen fuel under normal driving conditions. MOFs are compounds that contain metal ions coordinated to organic ligands. The 3D structures of some MOFs form pores that strongly adsorb molecules of hydrogen gas and cause them to attract other molecules, which could allow the gas to condense under near-ambient conditions.

The testing of the four different compounds—two that contained nickel and two that contained cobalt as the coordinating metal—found that the MOF called Ni2(m-dobdc) showed the highest hydrogen-storage capacity over a range of pressures and temperatures.

At ambient temperature and a much lower tank pressure than used in current hydrogen vehicles, Ni2(m-dobdc) set a new record for hydrogen storage capacity of 11.9 g of fuel per liter of MOF crystal. The MOF had a significantly greater storage capacity than compressed hydrogen gas under the same conditions.

When the researchers examined the structure of the MOF by neutron diffraction, they found that a single pore contained seven specific binding sites for hydrogen gas that enabled dense packing of the fuel.

The authors acknowledge funding from the Fuel Cell Technologies Office within the Office of Energy Efficiency and Renewable Energy of the U.S. Department of Energy.

10 grams / liter at tank level is 100 liter / kilogram.
The MOF wouldn't want to be costly.
The volume is still significant though comparable to battery.
With the many supply line and conversion energy losses for H2 there is no reason to think this will make it competitive with light duty bev's especially when these can be charged from owner supplied solar.
But the article does show progress in this area as well as highlight the difficulties.

But in a heavy duty truck or heavy SUV this kind of storage paired with a Wankel-motor and you will see amazing ranges!