Engineers seeking to significantly improve the efficiency and performance of electric motors could benefit from using aluminum matrix composites (AMCs), according to research from the Innovate UK ‘Make it Lighter with Less’ R&D competition.

Metal Matrix Composites are metallic materials that have been reinforced with a secondary high-performance material. The format of the secondary material is typically a long-fiber, short fiber or particulate.

The project, led by AMC specialist, Alvant, in collaboration with GE Aviation, YASA Motors and the National Composites Center, achieved a 40% rotor weight saving on an axial flux electric motor while increasing the rotor’s power-to-inertia ratio potential. In addition, the number of assembly line parts was reduced which can result in a shorter assembly time. 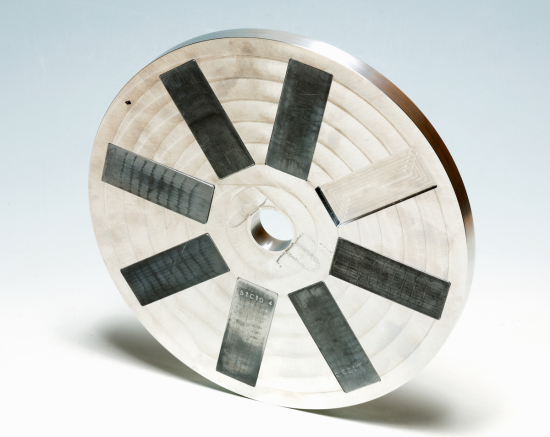 As electrification increases, vehicle manufacturers are seeking to optimize motor efficiency maps—for example, by improving the efficiency as a function of torque and speed that ultimately determines the energy consumption for vehicles. The industry faces the challenge of identifying ways to improve efficiency and performance, while simplifying manufacturing and overall cost.

Alvant’s proprietary AMCs enable components to be optimized for strength-to-weight and stiffness-to-weight ratio precisely where they are needed, even within a single continuous product.

Alvant’s proprietary Advanced Liquid Pressure Forming (ALPF) method can selectively reinforce areas of a component with one of its performance materials in a near net shape manufacturing approach. Alternatively, Alvant’s materials can be applied as discrete inserts into a component allowing for cost efficiency where an array of similar inserts are the solution.

By adopting AMCs in rotor design, Alvant was able to realize further benefits. In an axial flux electric motor application, Alvant’s technology can not only save weight; the component’s lower mass and reduction in force means engineers may be able to eliminate the number of fixing bolts required, reducing the bill of materials and assembly time.

Using AMCs, we have been able to attack the weight yet retain the stiffness of the electric rotor, to minimize parasitic mass, improving the power-to-inertia ratio and therefore efficiency and responsiveness. In addition, we can also offer better thermal resistance, up to 300 °C, making AMCs a more suitable material than polymer composites for applications such as motors, batteries, energy recovery systems, fans and flywheels.

In addition to the manufacturing and in-service gains, Alvant’s AMC is more sustainable, thanks to the ability to separate the fibers from the aluminum at the end-of-life stage.

While the Innovate UK/YASA project focused on a passenger car rotor, Alvant’s own research programs demonstrate the gains to be made by adopting AMCs across multiple high stress or high temperature applications in sectors such as aerospace, automotive, defence, consumer goods and sporting equipment.

Established as CMT originally in 2003, Alvant’s goal has been the exploration of the potential of Liquid Pressure Forming (LPF) as a process for manufacturing AMCs. This has resulted in the creation of a more sophisticated process known as Advanced Liquid Pressure Forming (ALPF). ALPF is the method by which Alvant brings together aluminum, which acts as the matrix, and a high strength reinforcement fiber to create a high-performance aluminum Matrix Composite material.

Axial motors can be stacked for more power, put one on each CV in the back, eliminate the differential and get torque vectoring.

Audi Sport Abt Schaeffler which competes in FIA Formula E has already built an amazing 4ePerformance concept based on an Audi RS3 sedan that has 4 220 kW motors (one per wheel connecting them via a spur gear unit). The result is 880kW, which is equivalent to 1,184bhp and torque vectoring. These motors weigh 26 kg each so power to weight is over 5hp per pound.
The YASA motor (one of the partners in this Innovate UK project) has a current motor with 160 kW(214 hp) peak power @ 700V and weighs 24 kg (4hp per pound).
So imagine 40% less weight (power to weight of 7hp per pound).
So with the Alvant tech we are looking at aerospace applications, e.g. eVTOL or hybrid electric aircraft. For example a GE T700 turboshaft engine used on an AH-64 Apache helicopter has around 4 hp/lb. even the brand new T901 probably gets around 6hp/lb.

Agree, the lighter you can make an aircraft component/assembly the better the performance. We also have the promise of graphene pending to develop lighter more efficient inverters and auxiliary electronics for aircraft. Perhaps a small hydrogen hybrid and/or a battery electric airliner is in view.