An international team of researchers has developed a manganese hydride molecular sieve that can be readily synthesized from inexpensive precursors and demonstrates a reversible excess adsorption performance of 10.5 wt% and 197 kgH2m-3 at 120 bar at ambient temperature with no loss of activity after 54 cycles.

The team projects that reasonable estimates for production costs and loss of performance due to system implementation result in total energy storage costs roughly 5 times cheaper than those for 700 bar tanks, potentially opening doors for increased adoption of hydrogen as an energy vector. An open-access paper on their work is published in the RSC journal Energy & Environmental Science.

For future market acceptance of hydrogen fuel cell vehicles or portable devices an efficient, low cost and practical hydrogen storage system and infrastructure suitable for all applications still needs to be developed. To achieve a driving range greater than 500 km in a fuel cell vehicle, about 5 kg of hydrogen is required. In the expensive carbon fiber 700 bar non-conformable hydrogen gas cylinders, which are employed in today’s first generation hydrogen vehicles, 5 kg of hydrogen occupies a volume of about 125 L, thus placing unwanted constraints on the automobile design.

A material-based hydrogen storage system gives the possibility of storing hydrogen at lower pressures with simplified thermal management requirements that may reduce both onboard and infrastructure system complexity and costs. While some metal hydrides approach practical performance levels, problems with heat management still thwart their applications.

… So to facilitate broad scope implementation of fuel cell devices, a material is required which possesses high gravimetric and volumetric storage capacities under ambient conditions, and is both economical to produce and does not require extensive heat management to refuel. Such a material could also present a possible alternative to Li-batteries in portable devices, where rising costs and demand for energy storage are a concern.

Herein we present a manganese hydride molecular sieve (KMH-1 = Kubas Manganese Hydride - 1) which can be prepared in a few simple steps from inexpensive precursors and possesses hydrogen storage performance which, even when estimates on system implementation are taken into consideration, may be sufficient to meet or surpass the US Department of Energy’s (DOE) ultimate system targets of 6.5 wt% and 50 kgH2/m3 for 5 kg of hydrogen. 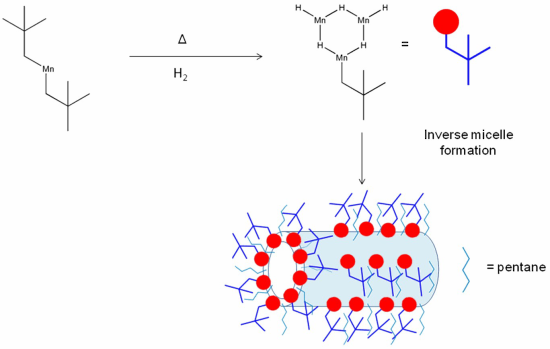 … a storage material-hydrogen binding enthalpy of between 20–30 kJ mol−1 would give the best balance between storage capacity and the energy required to release the hydrogen. In order to achieve an enthalpy in this range metals may be incorporated into the storage materials, to which H2 may bind in a Kubas fashion.

This is similar to the synergic bonding described by the Dewar–Chatt–Duncanson model for the interaction of, for example, CO with transition metals. The fabrication of solid state materials which use the Kubas interaction to store hydrogen is a great challenge because it is difficult to synthesize a material that has both a high concentration of low valent, low coordinate binding sites (transition metals in the solid state prefer to be 6-coordinate in most cases), light weight, and enough porosity to allow hydrogen to diffuse through the structure.

The material stores hydrogen reversibly under ambient conditions and as it is thermodynamically neutral will not require extensive engineering to utilize in on- board storage, in a wide variety of portable devices and even for large quantity transport (tube trailer or ship), while at the same time allowing a crucial decrease in the complexity and cost of the supporting infrastructure. Antonelli et al.

It's worth comparing this to the energy storage density of methanol.

Hmmm.  This is actually BETTER for storage density than methanol!  Tankage will still cost a lot more, though.

Sounds good to me.
197 Kg of H2 in 1 cubic meter is interesting for longer term storage of H2.
If you need 5kg for a car, it should fit in 25 cubic decameters (!) or a space 0.5 x 0.5 x 0.1 m in size, which should leave you with some trunk space left.
In general, I am sceptical of H2, but if you can store it easily, it starts to look much better.
I hope they have enough funding to develop this work.

A cubic decameter is known by the (obscure, I admit) name of "liter".

Uh?
Deca relates to factor ten .
" The cubic decameter is a metric unit of area equal to 1,000 cubic meters."
Decimeter would work.

and yes, EP, liter is a more usual unit of volume.
For our US brethern, we could use quarts as an approximation.

Simple, isn't it.
A big hand for Napoleon.

If this process can be mass produced at an affordable cost, low cost short-medium-long term H2 storage could become an economical reality, portable, mobile and fixed installations?

If so, near future affordable extended range FCEVs and fixed H2 storage could also become realities in the 2020s.

REs such as Solar and Wind could also benefit?

120 bar is still requires a strong tank.
DME is liquid at 300 psi, a cheap propane tank will do.

If you want a zero-emission vehicle with MeOH or DME, you have to capture and hold your CO2.  That requires a tank capable of ~80 bar, and your volume of CO2 (not fuel) determines your range.

It would be cheaper with the manganese hydride based on volume * pressure.  This really might be one of the missing miracles required to make hypedrogen more than just hype.

Affordable potential energy storage for (short-medium-long) terms, via a usable gas (H2), would benefit both intermittent REs and FCEVs of all sizes.