Under current policies, home energy storage systems would also often increase carbon emissions, according to a study by a team of researchers at the University of California San Diego published in the journal Environmental Science & Technology. 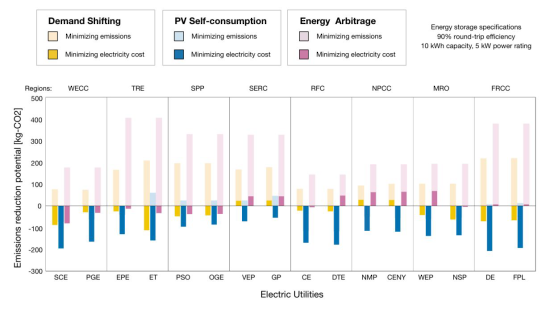 The researchers selected 16 of the largest utilities companies in the country and dug into their tariff structure, carrying out the first systematic analysis of how much utility companies charge residential customers to forecast the economic and environmental impact of these systems, if they were to be widely deployed across the country.

Conventional wisdom may suggest that these storage systems—essentially household batteries such as the Tesla Powerwall—could be instrumental in weaning ourselves off greenhouse gas-emitting energy sources. But deploying them today, without making fundamental policy and regulatory reforms, risks increasing emissions instead.

If residents use these systems to reduce their electricity bills, the batteries would draw energy from the grid when it is cheapest. And because utilities don’t structure how much they charge with the goal of lowering emissions, the cheapest power more often comes from power sources that emit carbon, such as coal. In addition, batteries do not operate at 100% efficiency: as a result, households that use them draw more power from the electric grid than they actually need.

For the systems to actually reduce greenhouse gasses, utilities need to change their tariff structures substantially to account for emissions from different power source, the researchers said. Utilities would need to make energy cheaper for consumers when the grid is generating low-carbon electricity, researchers said.

The study, conducted by a research team from UC San Diego’s School of Global Policy and Strategy and Jacobs School of Engineering, modeled how residential energy storage systems would operate in the real world. The study modeled deployment across a wide range of regions, utilities and battery operation modes.

We sought to answer: what if consumers on their own or in response to policy pressure adopt these systems? Would greenhouse gas emissions from the electric power system go down, and at what economic cost?

—lead author Oytun Babacan, a postdoc at the School of Global Policy and Strategy

The systems are so new that they are not in many homes. But this year saw a substantial increase in installations, with sales tripling from January to September of 2018.

When the systems are set up to operate with the goal of cutting emissions, they can indeed reduce average household emissions by 2.2 to 6.4%. But the monetary incentive that customers would have to receive from utilities to start using their home systems with the goal of reducing emissions is equivalent to anywhere from $180 to $5,160 per metric ton of CO2.

This is impractically high, and very high compared to other emissions reducing options that are available.

—Ryan Hanna, postdoc at the School of Global Policy and Strategy

Policymakers should therefore be careful about assuming that decentralization will clean the electric power system, especially if it proceeds without carbon-mindful tariff reforms that aim to reduce residential energy bills and energy consumption associated CO2 emissions, he said.

Absent tariff reform, policymakers could still encourage environmentally beneficial operation of the devices by ensuring that system developers and equipment vendors favor clean energy use by tracking and adjusting to variations in marginal emissions across the bulk grid, the authors noted.

Although the systems do not encourage cost-effective emissions control at the moment, authors were quick to note that the advantages of batteries should not be overlooked.

This study does not confirm my belief so it is likely wrong.

How very post-modern of you.

This seems counter intuitive, we need to see their assumptions.

Post-modern? I thought I was just being presidential. Interestingly enough, if the baseload comes from nuclear pp then you'd assume that batteries would be effective in reducing emissions so it would be interesting to see the study in detail but I'd leave that for others.

1. Carbon emissions from battery manufacture, shipping, installation, eventual disposal. These things are not required for a house to have power--they are additional infrastructure with their own carbon footprint.

2. As the study notes, existing monetary incentives for grid demand usage are not aligned with lowered-CO2 goals. If cheap, late night base load comes from coal, demand time-shifting is not desirable from a CO2 perspective.

As others have noted, if base load is nuclear, the equation becomes more favorable.

Depending on assumptions used, most studies can tailor the results to please the target group. This could be one of the numerous case.

According to major battery manufacturers in China, the cost of battery pack (for mobile and/or fixed uses) will fall below $100/KW by 2025 and below $50/KW by 2030 and cost of electrified vehicles will fall below ICEVs shortly after 2025.

Lower cost storage is the key to clean abondant REs.

if base load is nuclear, the equation becomes more favorable.

If you are starting with nuclear heat, it appears far more economical to store energy as hot molten salt than in batteries.  Nitrate salts don't wear out as such; they decompose slowly at high temperatures but you can regenerate them by adding nitric acid.

@E-P: Agree--nuclear baseload running full steam 24/7 (MSR) with molten salt thermal storage of night-time production could make for very economical electricity. The article is about home battery storage, something that is good for emergency backup but is probably an overly-expensive way to store grid surplus.

Resistance to Oil pipelines, together with forward and backward associated pollution and GHGs is easy to understand but resistance to NPPs is more associated with huge initial cost(running as much as 0.25$/kWh for new units and safer/secure waist nuclear material disposal?

Said majority has not yet been forced to choose either NIMBY and paying for it, or the alternative.  Nobody has ever allowed the option of ultra-cheap heat and DHW for having a CANDU or S-PRISM ITBY versus the alternative of costly carbon-taxed fossil fuels.  It would be seriously ironic if the ones protesting "environmental racism" because minorities are far more willing to live in polluted areas turn out to be the people willing to live next to nuclear reactors because the heat they need is cheap because it's free of carbon taxes.

@E-P,
China is already implementing your idea. The preliminary design of the Yanlong swimming pool-type low-temperature reactor for district heating was completed recently. Check out - http://www.world-nuclear-news.org/Articles/CNNC-completes-design-of-district-heating-reactor. They claim this is cheaper than Gas or Coal heating.
Though this reactor is a "safe, economical and green reactor product targeting the demand for heating in northern cities", maybe this low temperature design could also generate electricity using a binary fluid similar to geothermal power plants at the point of use. There is more information here: "Swimming pool-type low-temperature heating reactor: recent progress in research and application",
https://doi.org/10.1016/j.egypro.2017.08.110.
I also hope concepts like S-PRISM and other pool type reactors like MOLTEX are successful.

If you're trying to generate power, a swimming pool reactor is not the way to go about it.  Out of our currently-proven tech I'd suggest going NuScale and using the "swimming pool" as the emergency heat sink instead of the heat fluid.  You generate 192 MW(t), up to 60 MW(e) with steam tapped off to make hot water at whatever temperature the district heating system requires.  The advantage is that you get your initial steam at 275°C or thereabouts so you can generate significant amounts of electric power with it instead of some trifling fraction you can get from a heat source under 100°C.

NuScale Power web site actually points out the diverse applications for district heating and other process heat uses. It would also be a basis for an Emergency Core Cooling System (ECCS).

When it does, USA and many other countries will build many new NPPs instead of decommissioning existing units?

China may be one of the few/rare places where it can/will be done?

The instant you run out of water (or environmental margins) for hydro plants.  Nothing else is even remotely 24/7, and the "environmentalists" pointedly exclude hydro from their defintion of "renewables".


When it does, USA and many other countries will build many new NPPs instead of decommissioning existing units?

Not until the regulatory regime is made realistic and the cost radically reduced.  This is completely justified by the actual risks (we could have a Three Mile Island every decade and still be WAY ahead of the death toll of wind power, let alone coal) and decades overdue.


China may be one of the few/rare places where it can/will be done?

KEPCO has completed the first of four units at Barakah in the UAE.  It has completed functional tests and is waiting for trained operators to be available.  If the UAE can do it, it can be done anywhere there is a competent workforce to provide the operators.

The large batteries of every new 1,000,000 electrified vehicles will offer huge possibilities as storage/exchange of energy for/from REs at little extra cost.

Even RMBKs in earthquake zones are safer than ANYTHING which uses fossil fuels, even as a backup.


The main problem to be solved is the total nuclear energy ($0.25/kWh) rising cost

Stop government from adding requirements, workers and delays and the price will be reduced correspondingly.  Nuclear plants started out cheaper than coal boilers; government changed that.


The large batteries of every new 1,000,000 electrified vehicles will offer huge possibilities as storage/exchange of energy for/from REs at little extra cost.

Harvey, are you senile?  I debunked that just 2 weeks ago.  If you can't remember that far back, it's time for you to move into a managed-care home.