Ballard Power Systems has received a purchase order from Porterbrook Leasing Company Limited, a leading participant in the rail leasing market, for an FCveloCity-HD fuel cell module and related support to power a HydroFLEX train in the UK. 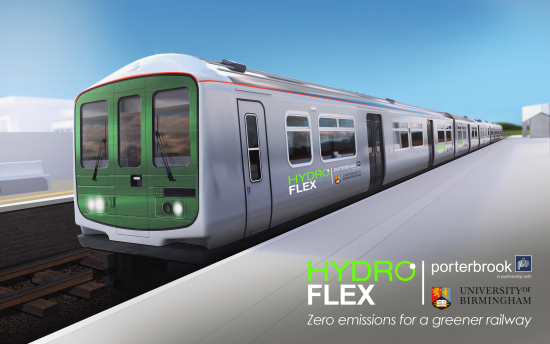 Earlier this year, UK Rail Minister Jo Johnson MP challenged the rail industry to develop decarbonization plans, with the objective of removing diesel-only trains from the network by 2040. HydroFLEX is an innovative response to this challenge from Porterbrook and the University of Birmingham’s “Birmingham Centre for Railway Research and Education” (BCRRE).

Porterbrook will provide a Class 319 electric train for conversion by BCRRE’s technical and research experts into a HydroFLEX hydrogen-powered train. The train will utilize Ballard’s power module and Ballard will also provide system controls development, mechanical integration of sub-systems and other components.

The HydroFLEX will be the UK’s first fully-sized hydrogen demonstrator train. It will showcase how hydrogen can be used to power a train that retains the ability to operate across existing electric routes, on either third rail or 25kV overhead power. Testing and demonstration runs are planned for the summer of 2019 at RailLive, which will take place at Long Marston in Warwickshire.

We are pleased to work with Porterbrook and BCRRE on the HydroFLEX rail program. As evidenced by this activity in the UK, along with our work on fuel cell rail programs in Germany and China, momentum is rapidly building behind the development and deployment of Heavy Duty Motive fuel cell solutions for both inter-city trains as well as intra-city trams. Ballard is now actively working with a number of the world’s most important players in the rolling stock sector, including Porterbrook, to meet this growing requirement.

Porterbrook also recently completed an engineering assessment that makes a positive case for the conversion of one of the UK’s most reliable trains into a battery/electric bi-mode. The class 350 Electric Multiple Unit is Britain’s most reliable train, with Porterbrook’s 350/2 version recording 100,420 Miles per Technical Incident (Moving Annual Average).

With the addition of the latest battery technology, Porterbrook believes that the 350/2 BatteryFLEX would be able to match, or outperform, diesel trains on existing non-electrified routes, particularly in key corridors across the North of England.

FC passenger trains are already in operation in Germany.

Higher speed (modern) units could be used on most non-electrified rails in USA/Canada by installing H2 stations every 1000 KM or so?