Automotive, Telecom and ITS companies carry out first Cellular V2X trial in Japan

Continental announced the completion of a joint Cellular V2X trial in Japan together with Ericsson, Nissan, NTT DOCOMO, OKI and Qualcomm Technologies. The companies have successfully conducted Japan’s first C-V2X testing in the country using 5.8 GHz as the experimental radio frequency for direct communication. 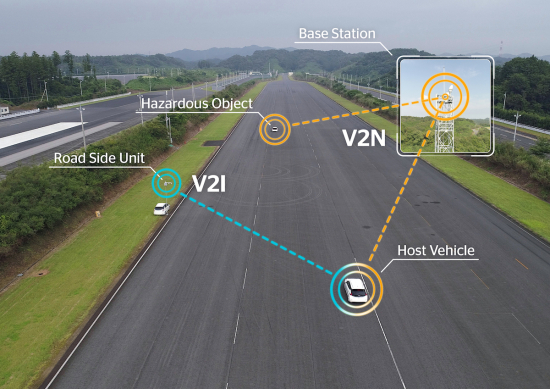 With a combination of direct and network-based communications between vehicles, infrastructure, and vulnerable road users, such as pedestrians and cyclists, the test results showed that C-V2X can exploit the full potential of connected and intelligent mobility. In addition, the tests also indicated the technology’s strengths for reliability and latency, which assists in enabling the communication of mission critical messages quickly and efficiently.

Direct communication provides vehicle to vehicle (V2V), vehicle to infrastructure (V2I) and vehicle to pedestrian (V2P) and other vulnerable road users connectivity even in the most remote areas where no mobile coverage is available. Under mobile coverage, C-V2X is designed to also enable a vehicle-to-network (V2N) communication link to deliver cloud-based exchanges of information over a longer range, including information on upcoming road conditions or traffic situations.

In their field trials, the companies focused on sending messages directly via cellular V2X technology (PC5). The use cases were tested under varying conditions to evaluate the C-V2X basic communications performance. With test vehicles passing each other at speeds of up to 110 km/h (68 mph) and with a truck or even buildings blocking the communications both direct and network-based communications were tested.

The companies observed a mean latency of 20 milliseconds for direct communication and a nearly error-free communication even at longer distances such as 1.2 kilometers with unobstructed line-of-sight condition as measured by the C-V2X test system.

With these results, the companies demonstrated the performance capabilities of C-V2X. The direct communication technology used in the tests was based on the 3GPP Release 14 specifications.

The trials took place in multiple test tracks in Japan, where the performance of C-V2X was tested using five scenarios: Do Not Pass Warning, Electronic Emergency Brake Lights, Hazardous Location Warning, Intersection Movement Assist and Vulnerable Road User Warning. These were chosen, to ensure that basic aspects of the communication technology were considered. Thus, the tests did not only focus on V2V communication but also on V2I, V2P and V2N communication under different traffic situations and driving speeds.

Working with Qualcomm Technologies, Nissan made a test driving plan for C-V2X to be used during the trials at the proving grounds. Bringing in their expertise in roadside unit (RSU) infrastructure and applications, OKI demonstrated V2I as a viable technology for advanced traffic applications by integrating the Qualcomm 9150 C-V2X chipset into their RSU. Ericsson, as one of the leading companies in the technology and service for telecommunication, assisted in testing the V2N use case scenario, combining direct communication and LTE-A network technologies. NTT DOCOMO provided a LTE-A network and V2N applications to demonstrate the benefits of the complementary use of network-based communications for a variety of advanced automotive informational use cases.

Following the positive test results, Continental will continue to further develop and investigate the C-V2X technology, globally as well as in Japan to enable an early global deployment. C-V2X will most likely be implemented initially on the 4.5 G (or LTE Advanced Pro) and further on 5G mobile communication standards from 2022 onwards.

C-V2X complements Advanced Driver Assistance Systems sensors, such as cameras, radar and Light Detection or LiDAR. C-V2X direct communication mode is firstly specified in 3GPP Release 14 and designed to offer vehicles low latency communications for V2V, V2I and V2P without the involvement of a cellular network, or cellular network subscription, by operating on a designated and harmonized 5.9 GHz ITS spectrum. Network-based communication offer wide area communications for V2N services. Currently, 3GPP is working on further enhancements of C-V2X in 5G.