Among countries globally, Brazil is expected to contribute 1.9 million barrels per day (mbd) of the global offshore crude oil production between 2018 to 2025, followed by Norway with 1.1 mbd and Nigeria with 0.9 mbd, according to data and analytics company GlobalData. 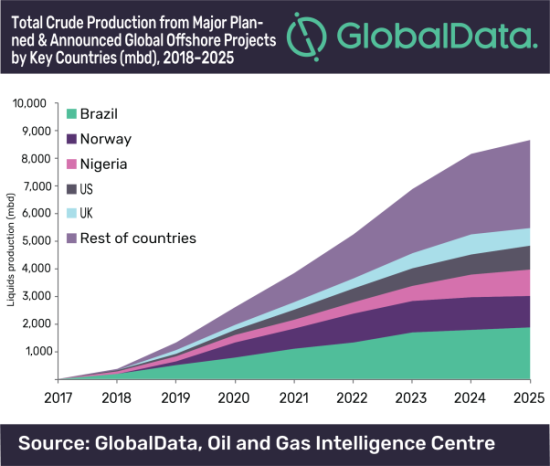 Among countries globally, Brazil alone is expected to contribute roughly 22% of the global offshore crude oil production, or 1.9 mbd in 2025. The country also leads in terms of new-build capex with US$70.5 billion expected to be spent between 2018 and 2025.

GlobalData identifies Norway as the second highest country globally with 1.1 mbd of crude production in 2025 or 13% of the global offshore crude and condensate production. The country is expected to spend around US$38.5 billion on the upcoming projects during the 2018–2025 period.

Nigeria is the third highest country globally with 11% of global crude production or 0.9 mbd in 2025. In terms of capex spending, the country is the second highest with US$62.7 billion to be spent during the outlook period.

Considering the world consumes 100 million barrels of oil per day, the other 90+ million have to come from elsewhere.