Municipal transport operator MPK in Poznań, Poland and Solaris Bus & Coach signed a contract for the delivery of 21 electric buses: 15 articulated and 6 standard length. Pursuant to the agreement the whole order is to be completed by the end of February 2020. The total contract value is more than 70 million złoty (US$18.5 million). 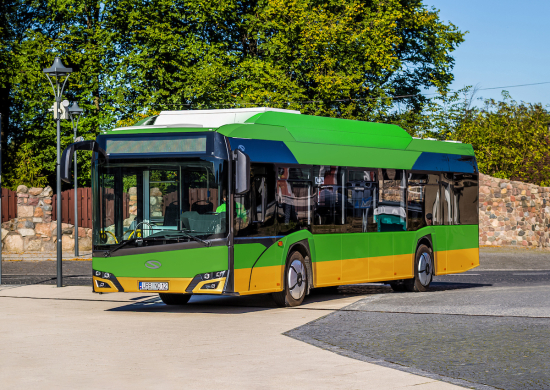 The buses selected by the Poznań-based carrier will be fitted with Solaris High Power batteries. In the case of the 12-meter Urbinos, the batteries will feature a capacity of 116 kWh; the articulated units, 174 kWh. Energy storage will be adapted to fast and frequent recharging using high charging power.

The electric buses will be suited for recharging by means of a roof-mounted pantograph and a classic plug-in device. The models supplied to Poznań will have plug-in charging sockets on both sides of the bus, which will ease recharging of several vehicles simultaneously.

The Urbino electric buses heading to Poznań will be recharged at three sites. Two new pantograph charging stations are to be set up at two bus terminals: one at the terminal Garbary, where one charging post including a plug-in charger will be available, and another one at the bus terminal near the Osiedle Sobieski estate.

At the latter site, two double-stand pantograph charging stations will be built, enabling the simultaneous recharging of 4 vehicles. With a pantograph boasting a power of up to 560 kW, the buses will be able to continue making their rounds after barely a few minutes of restocking energy at the bus terminal.

MPK has also decided to equip the bus depot at Warszawska street with an overnight plug-in recharging station. 10 double-stand stationary devices and three mobile charging stations will make it possible for the operator to concurrently recharge more than 20 electric buses.

In order to reduce the energy usage of the bus, the manufacturer will install a photovoltaic cell system on the vehicle roof. The bus design will also feature eco-friendly LED lighting inside and outside of the vehicle. Moreover, it will be the first time that buses providing bend lighting will roll out on Poznań streets.

So far Solaris has supplied more than 100 battery buses to buyers in Poland, and almost 90 more such buses have been commissioned. Poznań is yet another city that has decided in favor of high power pantograph recharging for bus batteries. Such a solution has been successfully applied in Warsaw, Jaworzno and Cracow.

If you've ever been next to a diesel bus idling at curveside, you realize how nasty they are and how they suck up all the oxygen around. Can't replace them fast enough.

At that relatively low unit price for regular and articulated e-buses, diesel units would be more costly to operate for 12 to 16 years.

Ironically, Poland gets most of their electricity from dirty lignite-fired power plants with horrible gCO2/kWh figures...

But for air quality in cities, this is good news.

PS. They can offset some of the polution from the Euro 3 and below cars retired from "Western European" countries that they also drive.

I favor more smaller EV shuttles, carrying 10-12 passengers and costing much less. Eventually they would be self driving where people don't have to wait long for the bus.