Mercedes-Benz has begun sales of two diesel models of the new GLE SUV which already comply with the coming Euro 6d emissions standard. Delivery of the first vehicles begins in spring of 2019. 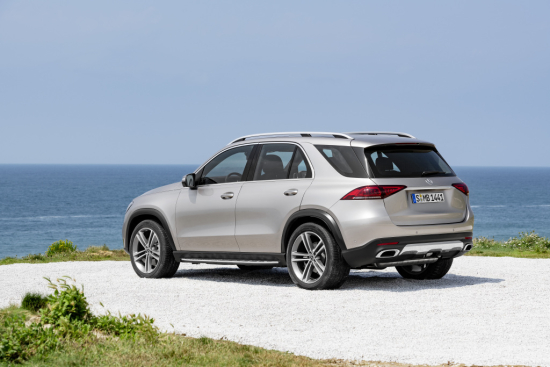 Certification in accordance with the Euro 6d standard (RDE stage 2) not prescribed for new models until 1 January 2020 is possible due to measures including extended exhaust gas aftertreatment with an additional underbody SCR catalytic converter including ammonia slip catalyst (ASC) in the underbody.

With this enhanced technology, NOx emissions drop to an average of 20 milligrams per kilometer in the case of the GLE 400 d 4MATIC, as shown by measurements in continuous operation of many thousands of kilometers. In individual journeys the values can also be considerably lower.

The GLE 400 d is the most powerful series-production diesel SUV ever offered by Mercedes-Benz. Most of the components relevant for efficient emissions reduction are installed directly on the engine.

With the near-engine insulated configuration, exhaust-gas aftertreatment does not suffer great levels of heat loss and generates extremely favorable operating conditions. The measures taken include high- and low-pressure exhaust gas recirculation including cooling, a diesel oxidation catalytic converter (DOC) to avoid the emission of carbon monoxide (CO) and unburned hydrocarbon (HC), a particulate filter with SCR catalytic function (sDPF), an SCR catalytic converter (selective catalytic reduction) for reducing nitrogen oxides. For this purpose, ammonia in the form of the carrier AdBlue is added to the exhaust gases before entering the sDPF.

The special features of the top-of-the-line engine in the premium diesel family include the stepped-bowl combustion process, two-stage turbocharging and, for the first time, the use of CAMTRONIC variable valve-lift control.

The stepped bowl has a positive effect on the combustion process, the thermal loading of critical areas of the pistons and the introduction of soot into the engine oil. The efficiency is increased by the higher burning rate in comparison with the previous omega combustion bowl.

The characteristic feature of the specifically configured combination of bowl shape, air movement and injector is its very efficient utilization of air, which allows operation with very high air surplus. This means that particulate emissions can be reduced to an especially low level.

Its design is characterized by the combination of an aluminum engine block and steel pistons, as well as the further improved NANOSLIDE coating of the cylinder walls.

The lower expansion of steel as operating temperatures rise ensures an increasing clearance between piston and aluminum block, thereby reducing the friction by 40 to 50 percent. At the same time, the fact that steel is stronger than aluminum allows very compact, lightweight pistons that even offer additional strength reserves. Finally, the lower thermal conductivity of steel leads to higher component temperatures, thereby improving the thermodynamic efficiency, increasing combustibility and reducing combustion duration.

The combination of innovative steel pistons and the optimized piston ring package with the NANOSLIDE coating of the cylinder walls results in benefits in terms of fuel consumption and CO2 emissions, especially in the lower and medium engine-speed ranges, which are of relevance for day-to-day vehicle use.

So, then dieselgate is over, albeit that we will never hear anything about it in the news (the link below is an exception). RDE1 limit is 168 mg/km and RDE2 limit is 114 mg/km (previously 120 mg/km). A level of 20 mg/km gives a substantial margin to those limits.

A trend that now appear is that modern cars aiming at RDE2 seem to use close-coupled sDPF and add an additional underbody SCR catalyst. The ammonia slip catalyst (ASC) is moved to a position after sDPF to the back of the underbody SCR.

The variable valve lift might have some benefits regarding internal EGR and temperature control, without much negative impact on fuel consumption.

The only clean diesel is a 'No Diesel.' I would like to have seen them build a large battery plugin hybrid instead. The sad part of all this is it will be on the road polluting for 15 to 20 years.

No Lad, they are "clean" if you measure low levels. And, do not come back with a discussion of biased tests and so on. Measurement by independent researchers also show the same. Hybrids are no cleaner when you measure them. It is sad that people like you cannot understand simple numbers when they are available.

Talking about clean: a diesel engine has lower PN emissions than in background air. When you drive the car in such polluted areas, you clean the air. This cannot be done with an electric car. On the contrary, the contribution from road and tire wear to PM emissoins will be higher from battery cars, simply because they are heavier. PM emissions from road/tire scales with vehicle mass. It is sad that this is not recognized.

And what about cobalt mining, child labor and the pollution associated with this?
https://www.cbsnews.com/news/cobalt-children-mining-democratic-republic-congo-cbs-news-investigation/

If you look closely at the recent report from the European Environmental Agency ("Electric vehicles from life cycle and circular economy perspectives; TERM 2018: Transport and Environment Reporting Mechanism (TERM) report," EEA Report No 13/2018 - https://www.greencarcongress.com/2018/11/201081126-eea.html), the results are at best mixed. The GHG emissions and (maybe) local emissions are generally lower for BEV, but human toxicity and ecotoxicity are MUCH higher, mainly from the production phase for the battery. Diesel ICEV generically is not only much lower than BEV in these parameters, it's lower than gasoline ICEV ( see Figures 3.4, 4.2, 6.2, and 6.3).