The authorities of Frankfurt am Main have officially started the city’s first fully electric bus line, number 75, with the deployment of 5 Solaris electric buses. The vehicles carry passengers in the city center on a specially created zero-emission line connecting two university campuses. 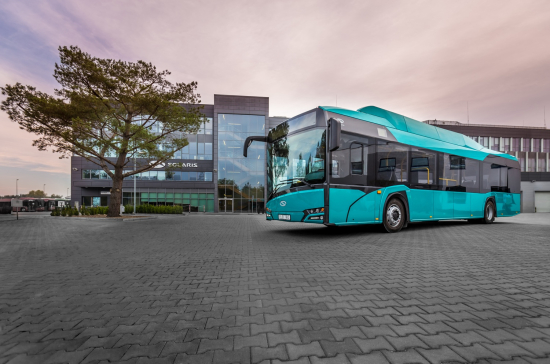 For the additional promotion of zero-emission transport in the city, the buses have been decorated with colorful veneer and provided with funny word games referring to electromobility. The contract for the delivery of five Urbino 12 electric vehicles was signed with In der City Bus Frankfurt am Main at the end of 2017.

The batteries havek a total capacity of up to 240 kWh, which are charged by a stationary plug-in charger. Solaris also delivered 3 chargers to the operator. The Urbinos are equipped with an innovative electric axle with two integrated motors.

Nearly 70 Urbino electric buses have already been contracted by Solaris with operators in Germany. It places the manufacturer first in terms of electric vehicles sold in the country and accounts for almost 20% of the entire electric bus market in Germany.