Researchers at Jiangsu Normal University in China have devised a boron-doped carbon-sulfur (BCS) aerogel with consecutive “core-shell” stuctures as a binder-free cathode for lithium-sulfur batteries. In an open-access paper in the RSC journal Chemical Communications, they report achieving a high specific capacity of 1326 mAh/g, long cycling lifespan and a high areal capacity of 12.3 mAh/cm2. 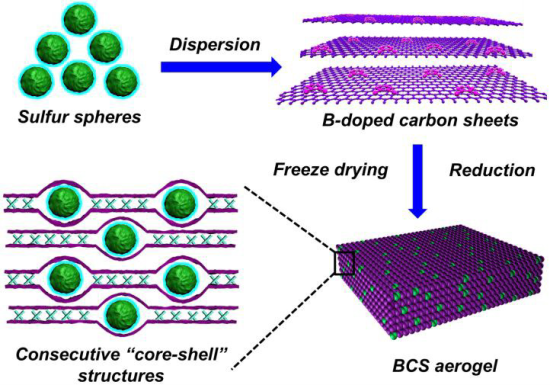 … several drawbacks prevent the practical applications of Li-S batteries, such as the poor electrical conductivity of sulfur (5×10-30 S/cm), the shuttling effects of intermediate lithium polysulfides (LiPSn), and volume expansion of sulfur during the discharge/charge process. These problems result in low specific capacity and poor cycling life of Li-S batteries.

Many effects have been devoted to develop advanced sulfur cathodes in order to improve the utilization efficiency of active sulfur. … Meanwhile, the ever-increasing demands of electric vehicles have driven the researchers to exploit high-areal-capacity electrode materials, which determines the capacity of each electrode. However, the electrode thickness will be enhanced when the areal loading increasing, and the thick electrode tends to be fractured with a lower electrical conductivity. Therefore, developing integrated sulfur composite electrode with high-areal-loading of active sulfur and good electrical conductivity, meanwhile prevent of shuttling of LiPSn, is of great importance for Li-S energy storage systems.

Herein, a boron (B) doped carbon-sulfur (BCS) aerogel has been developed with sulfur spheres as the “cores” and B-doped graphene sheets as the “shells”. Good porous structures of BCS aerogel can provide sufficient space for the expansion of active sulfur. Boron doped carbon sheets can restrict the shuttle of LiPSn via effective physical confinement and chemical interaction. Consecutive core-shell morphologies have been created based on the large size of B-doped carbon shells.

Due to these unique structures, promising performances of BCS aerogel have been achieved, including a high specific capacity of 1326 mAh/g and long-term cycling stability up to 500 cycles with a Coulombic efficiency of ~99.8%. In addition, a high areal capacity of 12.3 mAh/cm2 was realized due to the areal sulfur loading of 13.5 mg/cm2 in this BCS aerogel.

binder-free cathode..
The current collector interface is an issue.
B-doped graphene sheets ...
Like us know when you can produce in quantity cheap.

If this process can be reproduced at an affordable cost, it could become one of the improved super battery that the world has been waiting for?

Aerogel: sounds very light, and very bulky.
Might be OK for stationary storage - you could fill your attic with the battery, not so good for vehicles, except airships and balloons.

The aerogel is the conductor and container for the sulfur. They have had good results using selenium with sulfur. Selenium is much more conductive than sulfur and helps control the poly sulfides.

Keep in mind very high capacity, but expensive batteries have a place in many demanding environments such as electric airplanes, aerospace and military applications.