Researchers from the University of Houston and the Toyota Research Institute of America have discovered a promising new version of high-energy magnesium batteries, with potential applications ranging from electric vehicles to battery storage for renewable energy systems.

The battery, reported in the journal Joule, is the first to operate with limited electrolytes while using an organic electrode, a change the researchers said allows it to store and discharge far more energy than earlier magnesium batteries. They used a chloride-free electrolyte, another change from the traditional electrolyte used by magnesium batteries, which enabled the discovery.

Magnesium batteries could offer high energy density and safety due to the non-dendritic Mg metal anode. However, Mg2+ ingress into and diffusion within cathode materials are kinetically sluggish. It is therefore intriguing that recently organic cathodes were shown to deliver high energy and power even at room temperature.

Herein we reveal that previous organic cathodes likely all operated on a MgCl-storage chemistry sustained by a large amount of electrolyte that significantly reduces cell energy. We then demonstrate Mg batteries featuring a Mg2+-storage chemistry using quinone polymer cathodes, chloride-free electrolytes, and a Mg metal anode.

Under lean electrolyte conditions, the Mg2+-storing organic cathodes deliver the same energy while using ~10% of the amount of electrolyte needed for the MgCl-based counterparts. The observed specific energy (up to 243 Whr kg-1), power (up to 3.4 kW kg-1), and cycling stability (up to 87% at 2,500 cycles) of Mg-storage cells consolidate organic polymers as promising cathodes for high-energy Mg batteries. 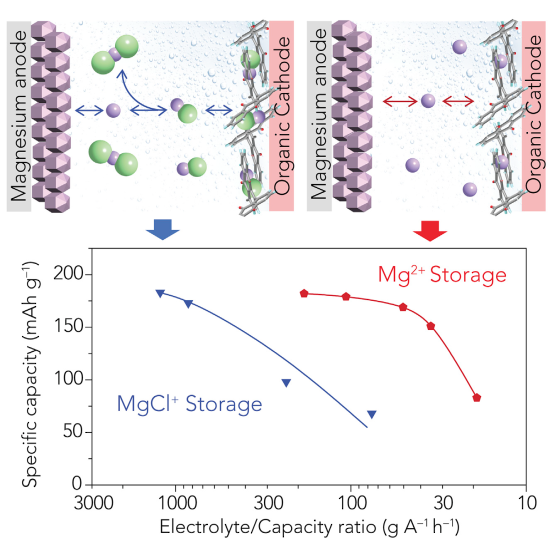 Yan Yao, associate professor of electrical and computer engineering at UH, said the researchers were able to confirm that chloride in the commonly used electrolyte contributes to sluggish performance.

Scientists have spent decades searching for a high-energy magnesium battery, hoping to take advantage of the natural advantages that magnesium has over lithium, the element used in standard lithium ion batteries. Magnesium is far more common and therefore less expensive, and it’s not prone to breaches in its internal structure that can cause lithium batteries to explode and catch fire.

But magnesium batteries won't be commercially competitive until they can store and discharge large amounts of energy. Yao said previous cathode and electrolyte materials have been a stumbling block.

Other researchers on the project include first authors Hui Dong, a doctoral student at UH, and Yanliang Leonard Liang, research assistant professor at UH; Oscar Tutusaus and Rana Mohtadi, both with the Toyota Research Institute of North America; and UH doctoral students Ye Zhang and Fang Hao.

Liang noted that until now, the best cathode for magnesium batteries has been a Chevrel phase molybdenum sulfide, developed almost 20 years ago. It has neither the power nor the energy storage capacity to compete with lithium batteries, he said.

Yao said future research will focus on further improving the specific capacity and voltage for the batteries in order to compete against lithium batteries.

Magnesium is extracted from seawater.  If there's a magnesium-permeable membrane material suitable for exposure to seawater, the anode half-cell might be usable as a way to extract metal directly from the oceans.

Argonne Labs had a battery project that included the investigation of Na, Mg and Al as possible substitutes for Li; don't know if they ever published anything.

The most interesting attribute of Mg as compared to Li is that it has two valence electrons and Li only one. IOW, the theoretical energy density of Mg is twice that of Li.
On the other hand, the Mg ion is larger than a Li ion and subsequently decreases its maneuverability through the electrolyte. My personal focus on future ion cells is set on solid electrolytes, rendering an acceptable solution for Mg-ion cells even more difficult than simply implementing an organic electrolyte. It should be noted that ions restricted in their movement through an electrolyte result in a lower coulombic efficiency than such moving relatively unrestricted.

This battery design looks interesting particularly from reliability, power, and cost perspectives. It has high power (3.4 kW/kg) and cycling stability (up to 87% at 2,500 cycles).
The material costs are also cheap (magnesium and quinone polymer) when compared to lithium, nickel, and cobalt.
The energy density (243 Whr/kg) may not be good enough for the next generation BEV, however it certainly would be excellent for a PHEV which Toyota specializes.
The Toyota Prius Prime 8.8 kWh battery has 72 Whr/kg energy density (it weighs 270 lbs or 122.5 kgs, based on Professor John D. Kelly of the Weber State University video). So double the power to 17.6 kWh to make it roughly equal to a Chevy Volt battery which btw weighs 196 kg, and it is significantly cheaper, too.
So how close is this to production status? Toyota?

Separators and electrolytes are difficult with magnesium.
One startup was using computers to search for the optimum
electrolyte, no word after years.

Reference for John Muldoon of TRINA paper on Magnesium Electrolytes: https://congresses.icmab.es/iba2013/images/files/Thursday/Afternoon/John%20Muldoon.pdf.
The startup using computers to search for the optimum electrolyte - Pellion Technologies, now claims to have built a reliable rechargeable lithium-metal battery.

I have not seen capacity nor cycles published for magnesium batteries, if they were making real progress we would see extensive trials by now.

I love the idea that there seems to be no other metal used than magnesium. The organics can be made from carbon and at end-of-life be completely destroyed to CO2. The Magnesium can be extracted from seawater, and at the end-of-life recycled or returned to seawater. This is the ultimate circular economy, very environmentally sound, and endlessly scalable (which is not the case for cobalt).

Even if power density and capacity is not optimal, this is a great chemistry for stationary batteries.

I don't think Toyota is working on them for stationary.

Stationary batteries are the bees' knees for EV charging stations.

Also for buffering minute-scale grid supply/demand imbalances.  Which can be integrated with EV charging stations.