Mercedes-Benz has expanded the powertrain line-up of its new G-Class with an efficient diesel variant. The new G 350 d (fuel consumption, combined: 9.8-9.6 l/100 km; combined CO2 emissions: 259-252 g/km) is equipped with an OM 656 diesel(earlier post). The models will be available to order starting in January 2019 and will arrive in dealerships in spring. 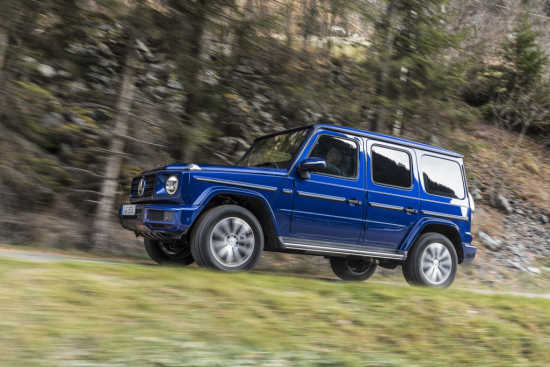 The characteristics of the engine include the stepped-bowl combustion process, two-stage exhaust turbocharging as well as the use of CAMTRONIC variable valve timing. This heats up the exhaust system without driving up fuel consumption. The further advanced NANOSLIDE cylinder wall coating also reduces friction losses in the piston/cylinder wall system and reduces fuel consumption.

The new six-cylinder diesel engine is designed to comply with future emissions legislation (RDE – Real Driving Emissions). All components relevant for efficient emissions reduction are installed directly at the engine. This contributes to faster effectiveness of the catalytic converter and the diesel particulate filter.

The most efficient G. Thanks to further enhanced emission control technologies, the powerful six-cylinder unit from the modern OM 656 engine family remains below all of the emission limits of the current Euro 6d-TEMP standard even in demanding driving situations and environmental conditions. This is achieved with an additional selective catalytic reduction (SCR) converter with an ammonia slip catalyst (ASC) in the exhaust tract of the GLE.

In ECO drive mode, the gliding function helps to save additional fuel. When the driver’s foot leaves the accelerator pedal, the transmission’s clutch disengages. This reduces the engine speed to idling level, and the driving resistance is reduced by the compression and frictional forces of the engine while coasting. The G-Class “glides”, using its own, current kinetic energy for a certain distance. It rolls for a measurably longer distance than when coasting. This results in further fuel savings. The clutch is re-engaged as soon as the driver operates the accelerator or brake pedal.

Partly due to the new quiet and harmonious diesel engine, the G-Class proves to be extremely comfortable, even on long distances. When driving, the exhaust system and the engine, which is also willing to rev at higher engine speeds, produce much less noise and vibrations in the interior. To reduce engine noise, the engine mounts of the diesel engine are actively controlled for the first time.

At speeds below 5 km/h, they are set to soft to optimally dampen the transfer of torsional vibrations to the ladder-type frame at low engine speeds. At higher engine speeds, the two engine mounts are automatically made stiffer, which has positive effects on the vibrational comfort and the driving dynamics.

9G-TRONIC. For the transmission of power, the 9G‑TRONIC automatic transmission with torque converter was specifically adapted to meet the needs of the off-roader. The developers used a dedicated software application to shorten the shift and response times of the 9-speed transmission and make the G-Class seem even more lively.

The wide transmission ratio not only makes driving quieter and more comfortable especially at low engine speeds, it simultaneously also contributes to reducing fuel consumption. Especially in first gear, the off-roader responds to accelerator pedal commands noticeably better, which customers will appreciate especially when pulling away from a traffic light, for example. The “G” is now also significantly more agile during brief sprints under partial load. 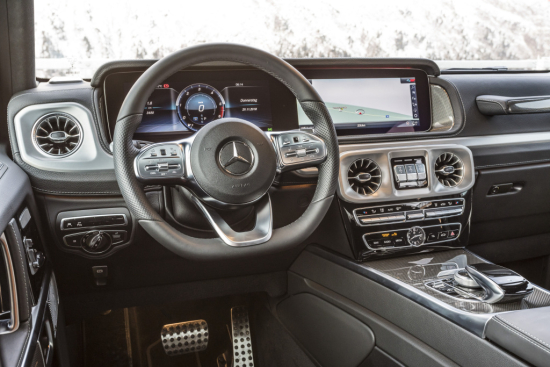 The new transfer case is flange-mounted directly to the 9G-TRONIC. It is designed to send 40% of the drive torque to the front axle and 60% to the rear axle. This configuration particularly benefits the handling characteristics on the road. The permanent all-wheel drive ensures maximum traction. The low-range off-road reduction gear considerably increases torque at the drive wheels.

DYNAMIC SELECT is now available with up to five drive modes for the G-Class as standard. This allows adjusting the vehicle characteristics in seconds at the touch of a button, as the system modifies the characteristics of the engine, transmission, suspension, and steering at the driver’s behest. In addition, the G-Class offers a host of new driver assistance systems. For example, Active Braking Assist is able to prevent impending collisions or mitigate their consequences, and assist the driver during emergency braking. If necessary, it will brake autonomously if the driver takes no action to defuse a detected dangerous situation.

Specifically for the G-Class, the new front axle is designed in such a robust way that the off-road performance and off-road capabilities of its predecessor are retained and partly even surpassed. The components of the double-wishbone front suspension are directly mounted to the ladder-type frame without a subframe. The lower wishbone’s attachment points on the frame in Z-direction are positioned as high up as possible. This arrangement ensures good driveability beyond the asphalt.

At the rear, in contrast to the predecessor, the new rigid axle is controlled by four trailing arms on each side and a Panhard rod. This makes normal driving on the road even more comfortable. Off the road, the rear spring jounce of 82 mm and rebound of 142 mm plus the ground clearance of 241 mm to the rear axle gear help to ensure a safe ride even in extreme situations.

The G-Class is not only the passenger car model series with by far the longest production run in the history of Mercedes-Benz, but also the forerunner of all SUVs bearing the three-pointed star—this is why all Mercedes off-road models feature the upper-case G in their name.

Why are dirty, polluting diesel vehicles featured on a site named greencarcongress.com?

What is the definition of "green car"? Has one been formally established?

@soltesza
Because they are... finally... clean. If you care to read the following: "...the modern OM 656 engine family remains below all of the emission limits of the current Euro 6d-TEMP standard even in demanding driving situations and environmental conditions", you would undestand. We are not talking about small margins to the limit. Albeit that we do not yet have any independent test data available, data from similar cars/engines indicate a level of 80-90% lower than the limit. That is clean! Per definition!

This is the future powertrain. Fuel consumption is 20% lower and GHGs are 30% lower than gasoline. There is no other heat engine that can match its efficiency. Nobody has ever invented a better heat engine. Try if you think you can!