Home About Contact RSS GCC Twitter Newsletter
US average growth rate for PEVs per capita from 2016 to 2017 was 30.2%
AISIN and DENSO to form BluE Nexus to develop and sell driving modules for EVs

The amount of natural gas that can be technically recovered from future well locations has increased by 20% compared with an estimate made about five years ago—even while active drilling has depleted the resource—according to a new analysis by researchers at the University of Texas at Austin and Rice University. The researchers attributed the increase largely to new drilling practices.

The analysis, conducted by the University of Texas at Austin’s Bureau of Economic Geology, looked at the production capabilities and the total gas in place of four of the country’s top natural gas fields: the Barnett, Fayetteville, Haynesville and Marcellus plays. The new study updates a similar study the bureau conducted from 2011 to 2013 that was the most comprehensive report on unconventional resources publicly available at the time. 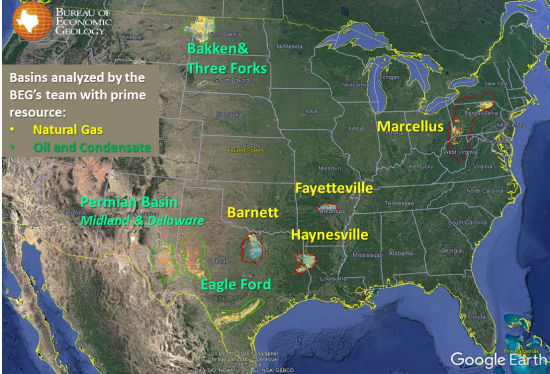 Svetlana Ikonnikova, the principal investigator of the study and a research scientist at the bureau, said that developments in drilling—such as multilayer or stacked well drilling, or of quadrupling lateral well length—market conditions, cost structures and improvement in geological characterization prompted the research team to update the assessment.

The team used 3D modeling and advanced data analytics to enhance the understanding of:

The researchers found that future wells in the four shale gas plays can technically recover about 780 trillion cubic feet (Tcf) of natural gas, in addition to about 110 Tcf of gas already recovered by wells drilled by the end 2017. (“Technically recoverable” gas can be produced using currently available technology and industry practices.) That estimate was about 650 Tcf in the previous study.

The United States consumed about 27 Tcf of natural gas in 2017, so the new estimate suggests the addition of about five years of domestic consumption.

The projected increase comes largely from new drilling practices that increase recovery, reduce per-unit cost and allow companies to continue drilling even during periods of low oil or natural gas prices. These new methods include stacked drilling, which accesses gas by expanding the vertical reach of fracturing. Drilling wells closer together and installing wells that can run horizontally for about two miles has further improved recovery.

Researchers also calculated the total gas held in the four shale plays to be 3,100 Tcf. Katie Smye, co-principal investigator of the study and bureau geologist, said it’s important to understand the amount of gas-in-place to verify what proportion has been recovered, compare results across plays and determine where additional wells can be drilled and efficiency can be improved.

For example, in the Haynesville and Marcellus plays, only 2 to 3 percent of the total gas-in-place is expected to be recovered by wells drilled to date, Smye said. This percentage is influenced by a number of factors including technology, economics and the amount of the play available for drilling.

Production outlook projections for major shale gas plays from the 2012 and 2017 analyses with varying assumptions on energy prices.

Even with the boost in production, the analysis shows production will plateau around 2030, barring a more dramatic price increase or boost in technology.

Researchers said this analysis emphasized the need to better understand cross-play dynamics in terms of capital allocation and investment decision making. Sharp declines in drilling and production from the Barnett and Fayetteville shales imply that these plays have matured, although they may simply be less attractive in terms of return on investment relative to other plays, especially those with more liquids production. The bureau’s Tight Oil Resource Assessment consortium has been focusing on the Permian Basin, which has been attracting the most investment in recent years.

The bureau is part of the UT Jackson School of Geosciences and is the State Geological Survey of Texas. Its 15-member interdisciplinary Shale Production and Reserves Study team integrates engineering, geology and economics. Peer-reviewed studies of the report’s technical analyses will be published in the coming months. The study was funded by the US Department of Energy National Energy Technology Laboratory.