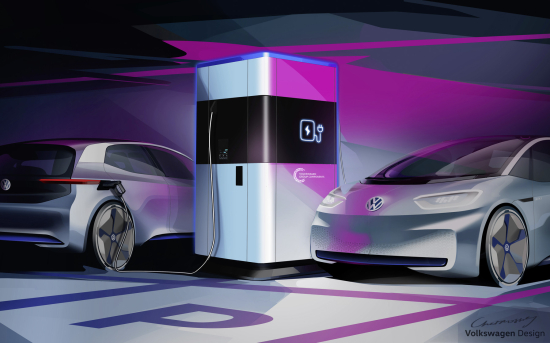 The mobile charging column is based on the battery pack of the Volkswagen Group’s Modular Electric Toolkit (MEB). This offers the advantage of quick scalability; it also allows batteries from electric vehicles to have a second life. The mobile charging station is an in-house development with the goal of developing a closed life cycle for the battery. The start of production is planned for 2020.

As of 2020, the charging station will also be implemented in other cities and communities. The mobile charging stations can be set up at defined points, for example, spread out across a city. The stations can be set up flexibly and independent of the power supply wherever needed: for example, in public parking lots in the city, on company premises, or as a temporary charging point at large-scale events. The flexible locations can be easily found via the Internet or apps.

If the energy content of the integrated battery set is less than 20%, the depleted charging station is simply exchanged for a charged one. If, however, it is permanently attached to the power supply with up to 30 kW via alternating current, the battery pack perpetually recharges itself.

In case the charging process is based on renewable power supply, the charging station furthermore allows the temporary storage of sustainably generated power, such as solar or wind energy—and therefore CO2-neutral mobility.

The mobile charging stations are a decisive step toward an efficient network of charging points. They can be set up anywhere as required—with or without connection to the power supply. This flexibility enables a completely new approach for the rapid expansion of the charging infrastructure. Cities can, for example, find out the most suitable places for a permanent charging point before making major investments in developing the network. In addition, it will be possible to set up a large number of charging stations temporarily—exactly when and where they are needed.

—Thomas Schmall, Chairman of the Board of Management of Volkswagen Group Components

This could become a way to make REs available 24/7and run PEVs with clean e-energy to reduce pollution and GHGs.

The world needs many thousand of these.

Trucking batteries around to replace drained ones with charged ones is the only thing sillier than using electrolytic hydrogen to make "renewable" methane for NGVs.  In any first-world country, it's much more sensible to have a "pole pig" on a skid that fits in a truck and run cables to a charging station.

The only real use for this battery is as a buffer to permit high power charging when the power feed to the site is limited.  Everything else, such as buffering unreliable power sources like wind and PV, is better done with existing resources by having the PEV fleet plugged in when parked and operated as demand-side managed loads.  It only takes a relatively small number of PEVs (a few tens or hundreds of thousands) to provide all the regulation services a regional grid requires, and many areas have that many already.  Level 1 connections will usually suffice for this, and the typical PHEV charging time on a Level 1 connection is a decent match for the length of the work day.

Putting these buffered high-power chargers at highway rest stops, where the installed power feed was specified for just one building and can't be upgraded easily to the 100's of kW level, is one of the few real applications today.

I doubt many people will be willing to damage the batteries of their cars to stabelize the grid. EV-batteries are too expensive for this application. And people prefer having their car battery fully charged whenever the want to start driving.
Mass-produced dedicated battery packs (which are cheap because often second-hand cells) would be preferable I foresee.

The technical requirements for a stationary battery pack is also very different from a driving and crashable car.
Waste heat from charging/decharging can also be used more cleverly with dedicated stationary systems.

people prefer having their car battery fully charged whenever the want to start driving.

In other words, by the end of the work day is perfect.


EV-batteries are too expensive for this application.

The only expense is in the chargers.  The EVs are already there.


I doubt many people will be willing to damage the batteries of their cars to stabelize the grid.

There is no such damage.  Operating the chargers as a variable load only (no backfeed to the grid) is sufficient to provide regulation and soak up quite a bit of variability in supply.  The AC Propulsion V2G test actually improved the capacity of the used lead-acid vehicle battery.  (full archive of ACP white papers here.)


Mass-produced dedicated battery packs (which are cheap because often second-hand cells) would be preferable I foresee.

Dedicated battery packs are net energy and money sinks.  The goal should be to integrate PEVs as the preferred method of grid regulation and build the fleet up as quickly as possible.  The dual-use technology adds benefits without adding significant costs.  Profits generated thereby can be used to help roll out more chargers and subsidize PEVs.

Assuming that most of the future extended range BEVs will be equipped with an average of 100KW batteries, a high percentage (50% or so) of the accumulated-stored energy could be made available:

(1) to regulate the grid.
(2) to supply fill in energy when REs are not producing enough to meet demands.
(3) to supply energy for electrolysers to produce H2 for local industries and FCEVs.

Of course, to make the process interesting for electrified vehicles owners, this type of energy on demand would/should get a higher (2X) selling price.

Waste of money in the short run.  Until most of the LDV fleet is at least PHEV, long-range BEVs use far too much battery to replace far too little petroleum.


a high percentage (50% or so) of the accumulated-stored energy could be made available:

(1) to regulate the grid.
(2) to supply fill in energy when REs are not producing enough to meet demands.

Harvey, is THIS your "miracle" energy storage which shoves hypedrogen out of its starring role?  Vehicle batteries, which hold hours of net energy demand when the "renewable" system requires months?  Ye gods, my estimates of your intelligence were WAY too high.


(3) to supply energy for electrolysers to produce H2 for local industries and FCEVs.

Yup, I was right.  You want to replace hypedrogen reservoirs at perhaps 1-5$/kWh with batteries which are $100/kWh and up.  You are insane.

The question is how to make better use of the costly battery packs installed in current and future extended range BEVs.

Using some of the 100 KW batteries accumulated energy to help meet peak demand periods and help to make intermittent REs = 24/7 is not impossible but could be a cleaner way to increase e-energy availability and H2 at a lower price. The alternative may be to build more $15B NPPs and/or polluting CPPs??

BEV owners could elect to repay part of the high initial price paid for the 100 KW batteries by using those batteries to produce revenues on a daily/weekly/monthly basis by recharging at $0.10/kWh and reselling at $0.25/kWh, at a slow rate (between 20% and 80%) not to damage the batteries.

The question is how to make better use of the costly battery packs installed in current and future extended range BEVs.

That is misdirection, disinformation.  The question is how to reduce petroleum consumption specifically, and fossil fuel consumption in general, the fastest for the least money.  Extended-range BEVs are so ineffective at this, they should not be any kind of priority for at least another 10 years.  Turning almost every vehicle sold into something between a start-stop hybrid and a PHEV should be the top priority for the transportation system; cogeneration should probably be the top priority for heating plants.  We have enough battery manufacturing capacity in the pipeline to make several million PHEVs per year, so making everything else mild or full hybrids should be no problem.  Things like electric power steering and electric A/C are major fuel savers by themselves, and electric A/C gets rid of refrigerant leaks from flex hoses to engine-driven compressors.  This is a no-brainer, unless of course you have no brain.

Wrong.  IT IS IMPOSSIBLE IN THE TIME FRAME REQUIRED.  Even if every light-duty vehicle in the USA was given a Tesla-class battery (an impossibility for many years due to the large amount of scarce materials required) it would be woefully insufficient to make wind and solar into 24/7 power sources.  That requires months of storage, not days.  Current production gives us just MINUTES of backup per year.

If Harvey was (a) numerate, (b) sane and (c) not a shill for ruinables über alles, you'd think he'd favor the cheap and achievable nuclear replacement for fossils over the 4000x as difficult "renewable" scheme.  He has shown no hint of taking the route of the possible over the impossible.  Innumerate, insane, shill:  pick one or more.

PHEVs are the most economic measure for replacing petroleum with electricity, until almost all vehicles are PHEVs.  That will be a while.  The USA has some 250mm LDVs; at 10 kWh apiece to convert to PHEVs, the total battery capacity is 2.5 TWh.  This is 50 years of pack production from a single Gigafactory.  It would take only 3-4 Gigafactories to put a 10 kWh pack in every new LDV in the USA, so the HEV/PHEV route is the fast track to replacing 2/3 or more of motor fuel consumption with electricity.  The USA purchases about 17mm LDVs per year; putting 10 kWh apiece into 250mm vehicles at 170 GWh/yr (3.4 Gigafactories) would be accomplished in just under 15 years.  The aggregate storage of 2.5 TWh would constitute about 6 hours of average US electric consumption.  This is adequate to replace at least 2/3 of petroleum demand, but grossly insufficient for Harvey's delusions of buffers for his precious unreliables.  Harvey isn't smart enough to cook this scheme up; it's his handlers/sources who are working to deceive everyone else, and (not coincidentally) maintain the dominance of fossil fuels for the foreseeable future.

If Harvey gave a damn about the planet, he'd shut up now and never post again.

Come on E-P, your rudeness is increasing at an endemic fast rate but may not be enough to reduce the TOTAL cost of new NPPs, to the level required to compete with future low cost Wind-Solar-Hydro-Geothermal-Wave natural REs?

The high growth rate of new REs together with much lower initial cost and very short initial construction/refurbishing time and cost is making NPP supporters very nervous and rude, in some cases?

REs natural inputs are free and almost unlimited in many cases. We will soon learn how to convert those free natural inputs into e-energy and/or heat, with higher and higher efficiencies, to supply the world 24/7 with clean/safe low cost energy.

Burning fossil and bio fuels is not an acceptable solution and will have to be phased out to reduce pollution and GHGs. We did away with the oil/gas furnaces, wood fireplaces and BBQs many years ago and will soon get rid of our HEVs for extended range BEVs/FCEVs as soon as enough quick charging and/or refill stations are available. We are going 100% Wind/Hydro electric and we do not support fossil nor bio fuels. Stop your false presumptiuous accusations.

(a) numerate, (b) sane and (c) not a shill for ruinables über alles
You need mental help.

According to (eia) latest evaluations, nuclear may be reduced to a minor source of energy (5%) by 2040, with:

The rise on REs may not be enough to offset the pollution and GHGs created by petroleum, NG and Coal. A 3.7 rise in Nuclear would have helped?