Researchers at the University of Virginia (UVA) have devised a process for converting retired Li-ion battery anodes to graphene and graphene oxide (GO). A paper on the work is published in the ACS journal Nano Letters.

… accompanying the booming expansion of the Li-ion battery market, a tremendous amount of batteries retire every year and most of them are disposed of in landfills, which not only causes severe waste of precious sources but also induces hazardous soil contamination due to the plastic components and toxic electrolytes. So far, only 1% of end-of-life Li-ion batteries have been recycled. Apparently, it is an urgent necessity to develop effective battery recycling techniques.

… A rational strategy to simultaneously solve the environmental issues from waste batteries and graphite mining is to fabricate graphene directly from end-of-life battery anodes. 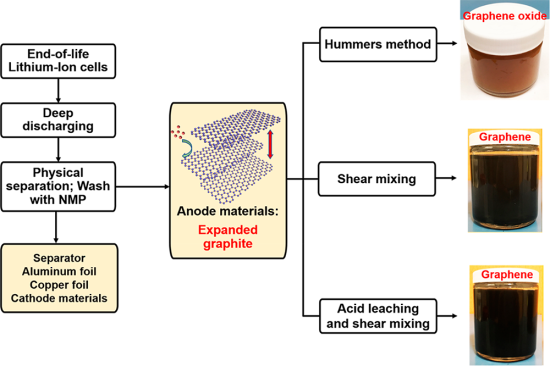 Graphite powders collected from end-of-life Li-ion batteries exhibited irregular expansion because of the lithium-ion intercalation and deintercalation in the anode graphite during battery charge/discharge.

Such lattice expansion of graphite can be considered as a prefabrication of graphene because it weakened the van der Waals bonds and facilitated the exfoliation.

This “prefabrication” process facilitates both chemical and physical exfoliations of the graphite. Comparing with the graphene oxide derived from pristine, untreated graphite, the graphene oxide from anode graphite exhibited excellent homogeneity and electrochemical properties.

The graphene fabrication was seamlessly inserted into the currently used battery recycling streamline in which acid treatment was found to further swell the graphite lattice, pushing up the graphene productivity to 83.7% (10 times higher than that of pristine graphite powders).

OK that helps with the recycling problems. Now, if someone would find uses for the graphene we could be all in.

It looks like flat Guinness to me.
Maybe if graphene gets cheap enough and available in large enough quantities, someone will find a use for it.

There's already been work on a graphene separator to halt polysulfide shuttling in lithium batteries with sulfur electrodes, so maybe that's a way to recycle old batteries into newer, better batteries.