Researchers at Kyoto University in Japan are proposing the selective dismantling of certain components from end-of-life vehicles (ELVs) to increase the recycling potential of precious metals (PMs).

In a paper in the ACS journal Environmental Science & Technology, they report that, in Japan, totals of 33–53% of PMs in ELVs were recycled in 2015, and that by selective dismantling of printed wiring boards (PWBs) and heating wires in the rear windows of ELVs, the recycling potentials of PMs could be optimally increased to a maximum of 62–83% by 2040. 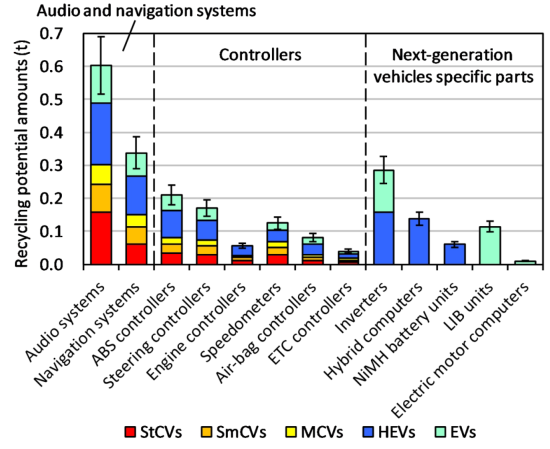 In the automotive industry, PMs are extensively used in certain components (e.g. catalysts and printed wiring boards (PWBs)) to meet regulatory and commercial requirements on safety, environmental performance, automation, and so on. As global automobile ownership and annual end-of-life vehicles (ELVs) generation exceeded 1 billion and 40 million per year in 2010, respectively, ELVs have become a promising secondary resource pool for PMs.

… Nevertheless, it has so far been difficult to efficiently recycle all PMs in ELVs because many PM-containing components are shredded, where their PM contents are highly diluted in complex shredder fractions. … for reasons of simplicity and speed, the current industrialized ELVs recycling system tends to focus primarily on the collection of catalysts, and neglects other PM-containing components such as PWBs. As the global automotive industry moves toward “greener” (e.g. preference for next-generation vehicles) and “smarter” practices, decreasing amounts of catalysts and increasing amounts of PWBs are required. If the recycling system for ELVs does not react positively to this change, many of the PMs in ELVs may not be returned to their material streams for reutilization in the future.

To clarify the recycling potentials of PMs from ELV parts by selective dismantling in Japan, the researchers developed a substance flow analysis (SFA) and a scenario analysis based on estimations of PM contents per ELV and ELV generations. The team set 2015 as the reference year and 2040 as the target year to reflect the current and future situations. 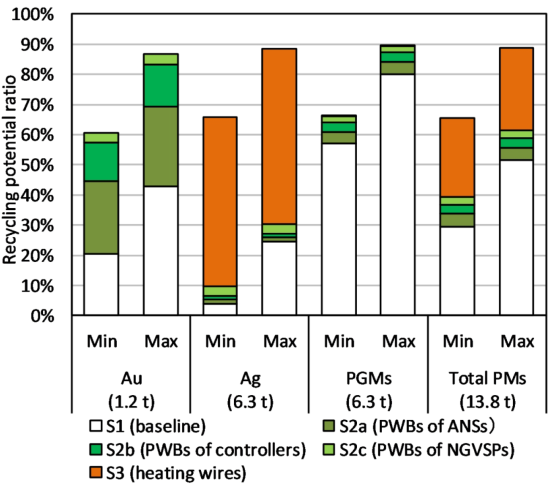 The study predicts that in Japan, from 2015 to 2040, the content of PMs per ELV will range from 2 to 6 g, and the annual amount of PMs in ELVs will remain largely stable, at 14–15 t, but the proportions of PMs utilized in different vehicles, parts, and components will gradually change; in particular, increased proportions will occur in the printed wiring boards (PWBs) of next-generation vehicles.

I am always search that free game and when i am found free solitaire games then i am enjoyed to play this game and this time there is five latest version of this game are comes.