Researchers from Tokyo Institute of Technology, Tohoku University and Nippon Institute of Technology at Tokyo Tech examined the mechanisms behind the resistance at the electrode-electrolyte interface of all-solid-state batteries and found that the crystallinity has a significant impact on interface resistance. Their paper is published in the journal ACS Applied Materials and Interfaces.

Reducing electrical resistance at the interface of a solid- electrolyte and electrode (solid-electrolyte/electrode) is crucial for the development of fast charge/discharge solid-state Li batteries. Although extensive efforts have been made to reduce the resistance values across the interfaces, the origin of the resistance has been in fierce debate. Many different origins have been proposed, such as the formation of space charge layers, voids, and reaction layers at interfaces. However, scientific understanding of the origins is still unsatisfactory. Because it is very difficult to investigate the relation between the atomic structures and ionic conductivity across buried interfaces in practical solid-state batteries, atomic-scale understanding of the interfaces has been limited. The difficulty lies in the fact that solid-state Li batteries consist of aggregations of grains, hindering the evaluation of reaction areas, crystal orientations, grain structures, and interface atomic structures. Accordingly, it is highly desirable to reveal the relation between atomic-scale Li-ion pathways and interface resistance.

… In this letter, we compare the atomic structures of two solid-electrolyte/electrode interfaces with high and low interface resistances using a CTR scattering analysis. We fabricated Li/Li3PO4/LiCoO2 thin-film Li batteries with high and low interface resistances by changing the repetition rate of the excimer laser in a pulsed laser deposition (PLD) processes. We stress here that the Li-ion pathway is defined in this thin-film battery. Using CTR scattering, we revealed that the low-resistance interface shows flat and atomically well-ordered structures at the LiCoO2 surface, whereas the high-resistance interface showed a disordered LiCoO2 surface. This result indicates that migration of Li ions along the Li3PO4/LiCoO2 interface and into grain boundaries or antiphase domain boundaries in LiCoO2 is the limiting step for ionic conduction between the solid electrolyte and electrode, thereby increasing the Li3PO4/LiCoO2 interface resistance values.

Scientists at Tokyo Tech, led by Prof. Taro Hitosugi, had previously reported a new type of all-solid-state battery, also based on lithium ions, which overcame one of the major problems of those batteries: high resistance at the interface between the electrodes and the electrolytes that limits fast charging/discharging.

Although the devices they produced were very promising and were much better than conventional Li-ion batteries in some regards, the mechanism behind the reduced interface resistance was unclear. It has been difficult to analyze the buried interfaces in all-solid-state batteries without damaging their layers. Therefore, Hitosugi and his team of researchers again investigated all-solid-state batteries to shed light on this topic. They suspected that crystallinity at the electrode-electrolyte interface played a key role in defining interface resistance.

To prove this, they fabricated two different all-solid-state batteries composed of electrode and electrolyte layers using a pulsed laser deposition technique. One of these batteries had presumably high crystallinity at the electrode-electrolyte interface, whereas the other one did not. Confirming this was possible by using a novel technique called X-ray crystal truncation-rod scattering analysis. 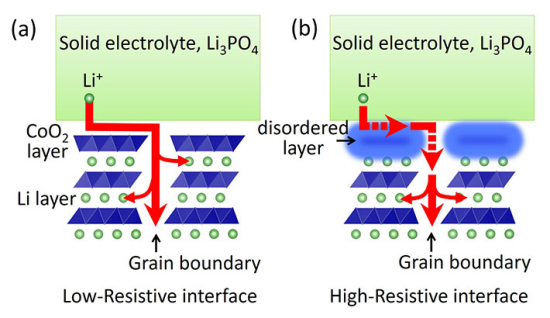 Conduction path of Li ions at the solid-electrolyte/electrode interface. (a) In the discharge process, Li ions migrate through the solid electrolyte to the interface. Since the LiCoO2 film is (0001)-oriented, the migration of Li ions into LiCoO2 is hindered by the CoO2 layers aligned parallel to the substrate surface. Therefore, Li ions migrate laterally on the surface of LiCoO2, and finally, diffuse into grain boundaries. (b) In the case of the disordered LiCoO2 surface, the diffusion of Li ions along the surface and into the grain boundary is restricted, resulting in a high interface resistance value.

Based on their results, the team concluded that a highly crystalline electrode-electrolyte interface resulted in low interface resistance, yielding a high-performance battery.

The development of theories and simulations to further understand the migration of Li ions will be crucial for finally achieving useful and improved batteries for all kinds of devices based on electrochemistry, the researchers said.