A team from the University of California Riverside has investigated the influence of low-, mid-, and high-ethanol fueling—as well as the influence of the aromatic hydrocarbons in the fuel blend—on the regulated and greenhouse gas emissions, the mobile source air toxic pollutants, and the particulate emissions from a current model flexible fuel vehicle equipped with a gasoline direct injection engine. Their paper is published in the ACS journal Energy & Fuels. 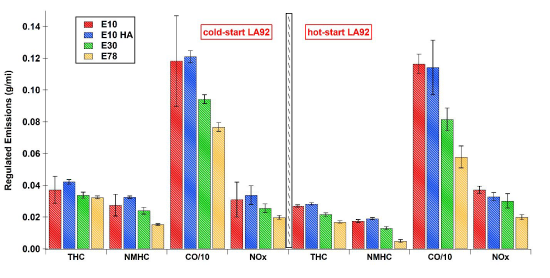 The researchers used four fuels: a baseline US EPA Tier 3 E10 fuel; one E10 fuel with higher aromatics content than the baseline E10; an E30 fuel that was splash-blended with the Tier 3 E10; and an E78 fuel.

Testing was conducted over triplicate cold-start and hot-start LA92 cycles.

The emissions of CO2 for the high-aromatics E10 were higher than the Tier 3 E10, E30, and E78 blends. A fuel economy penalty was also observed for lower energy content E30 and E78 blends compared to both E10 fuels.

Acetaldehyde formation was favored by the higher ethanol content in the fuel, resulting in significant increases compared to both E10 fuels. Benzene, toluene, ethylbenzene, and xylenes (BTEX) emissions enhanced their formation with the high-aromatics E10, whereas the use of E30 and E78 fuels showed important reductions in BTEX emissions.

Overall, this study provides valuable insights on the impacts of ethanol content and gasoline composition on the exhaust emissions from a current technology GDI FFV.