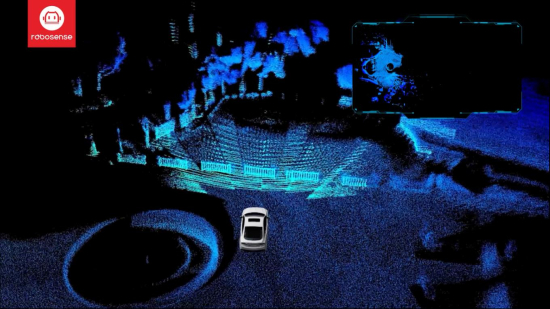 At last year’s CES 2018, RoboSense demonstrated the first-generation MEMS solid-state LiDAR RS-LiDAR-M1Pre. Four months later, in May 2018, it was loaded on the Cainiao unmanned logistics vehicle and unveiled at the Ali Cainiao Global Intelligent Logistics Conference, becoming the first solid-state LiDAR for unmanned vehicles. RoboSense has already been sending the MEMS LiDAR product to global OEMs and Tier 1 suppliers.

The new RS-LiDAR-M1 showcases the potential of the MEMS optomechanical system design, with improvements in detection distance, resolution, Field of View (FOV), reliability, and other RoboSense award-winning LiDAR sensing technologies.

The new RS-LiDAR-M1 MEMS optomechanical LiDAR provides an increased horizontal field of view by nearly 100% compared to the previous generation, reaching a 120° field of view, so that only a few RS-LiDAR-M1s are needed to cover the 360° field of view. In addition, with only five RS-LiDAR-M1s, there is no blind zone around the car with dual LiDAR sensing redundancy provided in front of the car for a L5 level of automatic driving—full driverless driving.

Based on the target production cost at $200 each, the cost of five RS-LiDAR-M1 is 1/100th that of the highest mechanical LiDAR available to the market, according to RoboSense—i.e., more in line with the cost requirements for the mass production of autonomous vehicles.