Total has started up production from the Egina field, located in around 1,600 meters of water, 150 kilometers off the coast of Nigeria. At plateau, the Egina field will produce 200,000 barrels of oil per day—about 10% of Nigeria’s production. 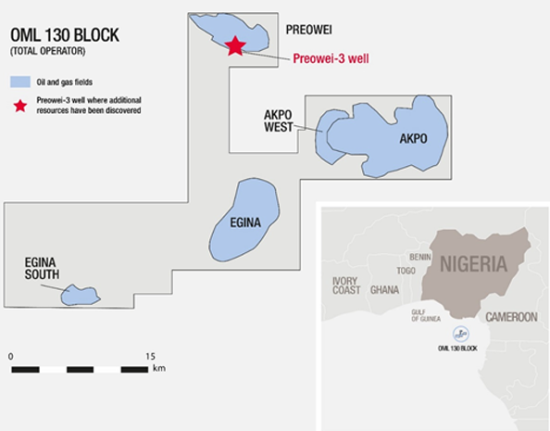 The Floating Production Storage and Offloading (FPSO) unit used to develop the giant Egina field is the largest one Total has ever built. This project has also involved a record level of local contractors.

Six of the eighteen modules on the FPSO were built and integrated locally, and 77% of hours spent on the project were worked locally. Startup has been achieved close to 10% below the initial budget, which represents more than US$1 billion of CAPEX savings, due in particular to drilling performance; drilling time per well has been reduced by 30%.

Initially discovered in 2003, the Egina field is the second development in production on the Oil Mining Lease (OML) 130 following the Akpo field, which started-up in 2009. The Preowei field is another large discovery made on this prolific block for which an investment decision is scheduled for 2019.

Total has been present in Nigeria for over 50 years, both in upstream and downstream activities. The group’s production in the country was 267,000 barrels of oil equivalent a day in 2017.

Total operates five production licenses (OML) on the 34 leases in which the gGroup has interests (including two exploration licenses).

In addition to OML 130 where the Akpo, Egina and Preowei fields were discovered, Total operates other offshore assets such as OML 99 (40%) where the Ikike discovery is located, OML 100 (40%) and OML 102 (40%) where the Ofon 2 project was completed in 2016. Onshore, Total is the operator of OML 58 (40%) under its joint venture with Nigerian National Petroleum Corporation (NNPC). The Group is also developing Liquefied Natural Gas (LNG) activities with a 15% stake in the Nigeria LNG Ltd company, which operates six LNG liquefaction trains on Bonny Island.