A research report submitted to the California Legislature this week by the University of California, Davis’ Institute of Transportation Studies proposes switching EVs to a mileage-based road-funding fee (road user charge, RUC) while continuing to have gasoline-powered cars pay gasoline taxes.

The report, “Assessing Alternatives to California’s Electric Vehicle Registration Fee,” was requested by the California Legislature.

Since electric vehicles use no gasoline, EV drivers pay no gasoline tax. As more people drive EVs, gas-tax revenue for road repairs is dwindling. To address the shortfall, many states, including California, have opted to charge an extra registration fee for electric vehicles.

That approach is not a sustainable or effective solution, according to report author Alan Jenn, a UC Davis research scientist with the Plug-In Hybrid & Electric Vehicle Research Center.

We find that the registration fee is not a sustainable mechanism to provide adequate funding as California transitions towards ZEVs. Additionally, the fee detracts from the market adoption of ZEV technologies by as much as a 20% decrease in new ZEV sales. Lastly, we examine alternative funding mechanisms include a fuel tax for hydrogen and electricity, as well as a road user charge (RUC). We find that a ZEV exclusive RUC is the most promising alternative to the ZEV registration fee. 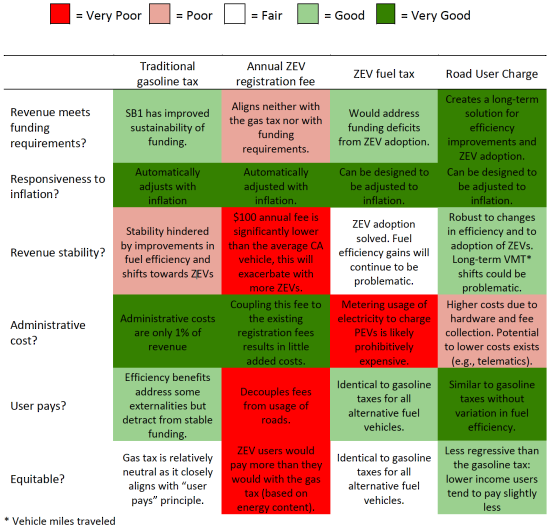 Although a number of other states have also introduced registration fees for EVs, only California’s transportation funding system is significantly affected, due to the relatively high adoption of ZEVs in the state.

The report finds that the annual registration fee for ZEVs suffers from several major drawbacks related to funding and equity:

Switching from the gas tax to a mileage fee for all vehicles would be technically and administratively difficult, according to the authors.

A road user charge (RUC) program, the other major alternative funding mechanism, has been investigated in California through SB1077. The California Department of Transportation identified several general challenges, based on the pilot program (California State Transportation Agency, 2017). One challenge is the relatively high administrative cost. This cost burden could be alleviated by imposing the RUC only on ZEVs, with the gasoline tax staying in place with other vehicles. The benefit of this approach is to eliminate the prospect of double tax payments for gasoline (traditional vehicles would pay both the RUC fees and gasoline taxes during the long transition period, requiring a costly fix). Another benefit of imposing the RUC only on ZEVs is that it allows gasoline cars to avoid the extra hardware costs and compatibility issues of pairing telematics (or other advanced technologies) needed to monitor vehicle miles travelled with existing technologies (e.g. on-board diagnostic [OBD] devices). This dual path approach would result in a slow transition to RUCs, but at much less cost.

The proposed transition is expected to cost less, to be easier to administer and to provide a smooth transition away from gasoline taxes. The report concluded that a mileage-based user charge would be the easiest and least costly way of addressing the long-term decline of gasoline taxes.

With increasing fuel efficiency in gasoline vehicles and increasing sales of zero emission vehicles, funding our transportation infrastructure with gasoline taxes becomes outdated. The annual ZEV registration fee under SB1 seemed like a good fix, but has major shortcomings. Our analysis suggests that the best solution for creating a sustainable, robust funding system is a RUC program applied only to ZEVs (allowing the parallel gasoline tax to gradually atrophy and eventually disappear).

I'd deem it exceedingly unwise at this point in time to introduce a Road Usage Charge. A tax is a tax irrelevant of how it is named. Let the gas hogs carry the burden to discourage an increase of same and encourage potential EV-buyers. When the scales have tipped in favour of EVs there is still time enough to introduce said RUC.

Why bother with general road user charges at all?  Roads benefit everyone, so pay for them with general tax revenues.  Most road damage is caused by heavy freight vehicles, so tax them based on weight and mileage.  Congestion charges are a way to encourage better use of a scarce public good (road space during peak travel times).

Vehicles which "platoon" and move in synchrony in traffic use a lot less road space than human-driven ones, so a break on congestion charges for them would be a way to encourage a changeover to help reduce the slowdowns of rush hours.

EVs should have to pay for roads. The money for registration and gas taxes should go for ROADS, not be used in the general fund or for anything but roads.

Registration in a.u. requires third party personal insurance component which I understand to now include the driver.
In 2001 the same year nearly 3,000 people died in twin towers, 47,000 died on U.S. roads. It is not so easy to estimate the deaths from pollution or permanent incapacity from those sources as it is not easy to estimate the lives saved owing to road infrastructure and its contribution to society well being.
The gas tax has been a cash cow for highly dependant govt's as has export and royalties on fossil fuel and other extraction industries.
When we elect politicians and enable bureaucrats to set unimaginative policies or policies designed to not upset the bosses and donors we should expect disagreement and dysfunction to dominate the public arena.

There is some merit to distance based charges over fixed cost registration when some components are duplicate for the owner of multiple vehicles as for classic collectors or practical small city / highway / work truck owners that can drive only one vehicle at a time but of course 'all three' vehicles can be on road at the same time with different drivers. In that case the loss of revenue to the state will be to the advantage of the owner.

The dilemma for the bureaucracy when BEV's dominate will be how to replace the taxes they are accustomed to from hydrocarbon fuels.
That will become a requirement in years to come but meanwhile the lower effective taxes paid on electricity are an important incentive for bringing about sustainable transport policy.

As with other taxes they can be adjusted up or down to meet social objectives such as hospitals schools roads or misused to fund quango's https://www.urbandictionary.com/define.php?term=quango
, military, and manipulated in ways that increase social disparity favour particular social groups (especially those with the power or tools to advantage their own privilege ).

Increase the road tax on fossil fuels to make up the shortfall and further encourage the transition to EVs. What's so hard about that?
When our world goes goes up in flames in 50 years we will wonder how we could be so weak-kneed when we had the slightest chance to extend the survival of our species.

Of all the other opinions, I think I agree with the Kiwi's the most.

The road mileage fee is second only to the fixed registration fee for perverse incentives.  Penalizing drivers for removing pollution from the environment, especially right where people are, is an act of outright stupidity or even malice.  Light vehicles do essentially no damage to pavement so shouldn't be paying taxes in that regard; since damage rises as some rather steep power of weight, heavy freight vehicles should be paying high per-mile taxes and almost no others should be paying at all.

Since everyone gets benefits from the roads whether they drive or not, it makes no sense to tax driving in lieu of taxing fuel.  Shift taxes to something else as fuel tax revenue vanishes.  Let the reduced cost in e.g. medical expenses from reduced pollution pay for it.

Taxing polluting liquid fossil and bio fuels to build and maintain roads/streets and bridges is justified and easy to collect.

Since the current e-grid mix is not that clean, all electricity used to charge electrified vehicles could be taxed for equivalent revenues. The tax calculators/chargers could be integrated into all private and public charging units. Simple low cost seal units could do the job.