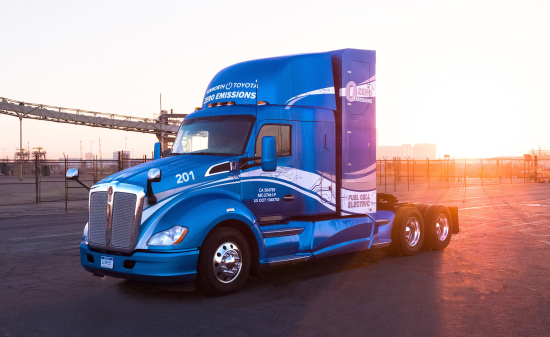 This collaboration is part of a $41-million Zero and Near-Zero Emissions Freight Facilities (ZANZEFF) grant preliminarily awarded by the California Air Resources Board (CARB), with the Port of Los Angeles as the prime applicant. (Earlier post.)

The grant monies are part of a larger $82-million program that will put fuel cell electric tractors, hydrogen fueling infrastructure, and zero emissions cargo handling equipment into operation in the ports and Los Angeles basin in 2020.

The Kenworth T680s will transport cargo across the Los Angeles basin and to inland cities such as Ontario and San Bernardino while generating zero emissions, other than water vapor, thanks to their fully electric hydrogen fuel cell powertrain integrations co-developed by Kenworth and Toyota.

This is not just a science experiment; the goal is to make a difference in society. To remove pollution and improve the air quality in and around the Port of Los Angeles.

The electricity generated by the fuel cells powers electric motors to move the trucks, while also charging the lithium-ion batteries to optimize performance as needed. Power management systems will apportion the electrical power from the fuel cells to the motors, batteries, and other components, such as electrified power steering and brake air compressors. The hydrogen fuel cell electric powered Kenworth T680s will have a range of more than 300 miles under normal drayage operating conditions.

The program will also fund foundational hydrogen fuel infrastructure, including two new fueling stations that, subject to a final investment decision by Equilon Enterprises LLC (dba Shell Oil Products US), will be developed through Shell Oil Products US, to support the operation of the fuel cell electric trucks in Southern California.

Wise of Kenworth to use proven FCs. Two FCs per heavy trucks may be required.

It’s only ten trucks, but what Toyota and Kenworth will learn -- and have learned already -- can be scaled up quickly. Hold on to your hat.

Kenworth has the brand, Toyota has the technology.