At NAIAS 2019, Cummins Inc. unveiled its next generation 6.7L turbo diesel engine featuring a first-in-class 1,000 pound-feet (1,356 N·m) of torque. In addition to an increase in torque, the engine also has a higher horsepower output, taking the 2500 and 3500 heavy-duty RAM pickup truck customers to the next level of performance. 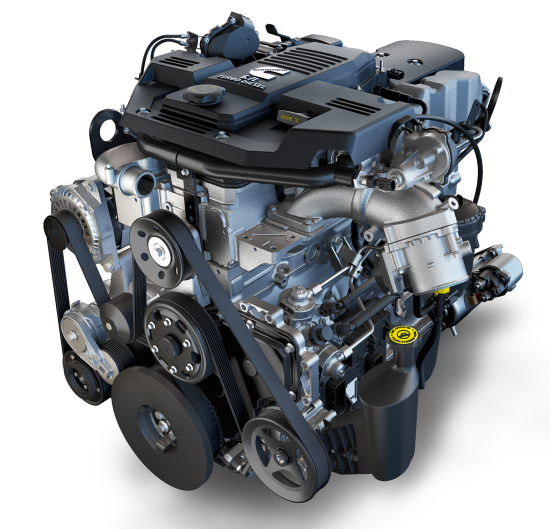 The heart of the engine is a higher strength alloy crankshaft with a 10-bolt crank flange driving newly-designed forged connecting rods and new bearings, which transfer power from the low-friction ring wrapped pistons.

A new larger Cummins-Holset variable-geometry turbocharger optimized with heavy duty bearings, and a new compressor-side housing is a key ingredient in the new ratings pumping 33 pounds per square inch (psi) of fresh air into the engine. The new fuel-delivery system includes a new 29,000 psi (2,000 bar) fuel pump and fuel rail with Cummins Filtration “filter-in-filter” NanoNet technology. NanoNet features many distinct layers of protection to remove and retain particles as small as 4 microns in a composite media structure. These 100% continuous polymeric fibers are bonded together for strength during vibration and flow surges.

In addition to displaying the most advanced and reliable RAM 2500 and 3500 heavy-duty engines, Cummins also displayed a 2.8L turbo diesel engine alongside the latest turbocharging, filtration, and light-duty aftertreatment technology.

There is a new design on the market for a new novel piston engine that nobody ever studied. if you are interested it is call c.c.p engine, c.c.p stand for central compression piston. It is a smaller diameter piston in central position into the expansion chamber that boost the pressure and it do a different ratio on the compression chamber. reducing drag pressure. It is supposed to produce 6 time the normal power of the actual otto cycle one piston engine. All gearhead of greencarcongress and internet it is time to jumpstart this industry and stop right away climate change.

"It is supposed to produce 6 time the normal power of the actual otto cycle one piston engine. " I suppose you also believe in Santa Claus...

I posted a very basic diagram on the oilprice dot com discussion website, The post is called central compression piston engine. it was posted some hours ago by me ( abr ).
We can see where the c.c.p is positioned compared to the main piston that is connected to the crankshaft. The c.c.p is controlled by a special camshaft but I didn't posted the diagram yet, but I can say that it control the up and down movement at any time. This ccp camshaft mechanism need many gear and levers and pivot and hydrolic circuits and probably 2 camshaft lobes. I will post this later.

On the compression cycle the ccp is going to his top position before the main piston, this provoke a low compression job reducing drag on the engine. Than just before the power stroke the ccp is going toward the main piston compressing the cylinder while the main piston is powering the crankshaft. Maximum pressure happen at 20 degree past top dead center where the crankshaft-piston angle is at a more favorable angle to transfert the pressure into work. Then there is more pressure work done to the crankshaft because gas pressure only expand in the axis
that do the work, from top to bottom in a very narrow expansion chamber.

on the exhaust stroke, the remaining pressure can power an exhaust track electrical generator and with this electricity we further compress ( in a tank ) some air that will further down be injected in the engine for further expansion. The pressure in the air tank should constantly be a little bit higher than the circuit it enter. This pressurized air can be introduced just before the power stroke and ignition. We can use cheap gasoline if we ignite the fuel by compression just before or at top dead center. Every and all cars of today ignite the gasoline before top dead center losing heat and further pressurizing the piston in the opposite way that where it is going, creating big losses of power.

This is not a new idea. A quite similar engine was developed by a Swedish inventor more than 30 years ago. It was called the “Alvar Engine” (Swedish: “Alvarmotorn”), by its inventor, Alvar Gustavsson. Most interest for this engine was in the early 90’s. The inventor had several working prototypes, so it was much more than a sketch on a napkin. He also received funding from Swedish governmental agencies (e.g. Nutek and STU). The corresponding governmental agency today is “Energimyndigheten” i.e. the Swedish Energy Agency. The engine was thoroughly analyzed by the University in Lund, a former employee of Volvo Car, as well as the Swedish auto industry. Most of the development was made before the “Internet era”, so you will not find much information on the Internet, but you could at least look at the patent literature (there are many more than those I listed below).
https://patents.justia.com/patent/5188066
https://patents.google.com/patent/US20120078491A1/en

I will only describe the Alvar Engine shortly. The motion of the piston in the cylinder head of the Alvar Engine has its own crankshaft that is connected to the main crankshaft and it also had a mechanism for phase shift. The main purpose of the piston was to enable continuously variable compression ratio. It was also found that the piston does some of the compression work and some of the expansion work (this varies with phase shift) but the main advantage lies in the variable compression. However, the engine design also had its drawbacks. It could only use two valves and furthermore, these would be reduced in size. Thus, the engine would be quite “asthmatic” by today’s standard or 4-valve engines. You gain something by the variable compression but loose by increased pumping work. Perhaps the engine could have some advantages at low load but to gain power comparable to a conventional engine, you would have to scale up the Alvar Engine, which, in turn would reduce part load efficiency. Although most of the patents probably have expired by now, the auto industry has lost all interest in the Alvar Engine.

The claim by “regorr” that he would increase power by a factor of 6 is pure fantasy. Instead, this engine would have less power than the conventional engine. This was already found on the Alvar Engine and here we are not talking about theory, but we must realize that there were working prototypes of this engine as basis for this conclusion.

Very impressive refinements by Cummins. Does anyone know the BTE or price delta to previous models? This would be/is a trailer pulling beast.