At NAIAS 2019, INFINITI unveiled the QX Inspiration midsize SUV concept, previewing the brand’s first fully electric vehicle. This design study previews the brand’s plan to launch a range of high-performance electrified vehicles; the INFINITI lineup of the future will consist of a range of electric, e-POWER and performance hybrid vehicles. 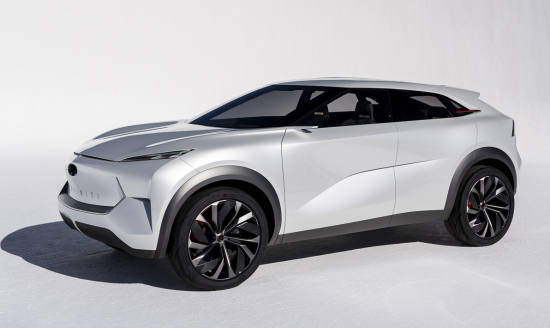 The new concept illustrates how new architectures and technologies are influencing modern INFINITI design. It also draws on the Japanese spatial concept of ‘Ma,’ demonstrating how open spaces between lines create tension and build anticipation.

The development of new electrified vehicle platforms enables the creation of spacious, lounge-like interiors influenced by omotenashi, the Japanese approach to hospitality. The cabin incorporates technologies to create a welcoming environment while assisting drivers and connecting occupants to the world around them.

For INFINITI, our powertrain electrification strategy focuses on offering both high performance and range confidence. As the luxury brand within the Renault-Nissan-Mitsubishi Alliance, INFINITI can draw on a wide range of ultra-low emissions powertrain technologies to deliver driving pleasure and thrilling performance. We have previously explored this with the Prototype 9 and Prototype 10, and QX Inspiration shows how this philosophy will manifest itself in production: as a powerful electric SUV with a versatile character and luxurious interior.

The QX Inspiration concept signals the brand’s intention to produce a fully electric midsize SUV, based on an all-new vehicle platform, which could accommodate a powerful electric all-wheel drive (e-AWD) system. The concept’s SUV packaging means the high-capacity battery pack can be located below the vehicle floor, feeding power to a pair of electric motors (one on each axle).

Dominating the dashboard is a wide-screen monitor flowing from pillar to pillar, finished in polarized gold-tinted glass. The rectangular steering wheel, trimmed in soft brown and white leather, also features its own monitor.

We have taken advantage of the EV architecture to develop a lounge-like interior, enabled by the flat floor and the empty space below the dashboard and center console. So really, we’re not just designing the objects inside the car, we’re designing the empty space between objects. We’re trying to use that space to accentuate the design – you let the empty space talk as much, if not even more, than the forms and objects that are there.

Where the electric vehicle architecture is a macro-enabler for the overall structure and design, the pillar-to-pillar widescreen serves as a micro-enabler for the minimalist interior. A signature theme that will eventually be reflected in future INFINITI vehicles, the widescreen system has facilitated a dramatic reduction in the number of buttons in the interior and a clearer dashboard-wide display of information for driver and front passenger. The customizable screens enable the front passenger to see and control a range of functions, from infotainment to cabin lighting, as well as heating and ventilation.

The proliferation of displays, including the center of the widescreen rectangular steering wheel, gives the driver easy access to important information. There are digital displays linked to the rear-facing door-mounted cameras, to navigation and traffic systems and vehicle diagnostics.