GlobalData: China to account for 44% of Asia’s crude oil refining capacity in 2023 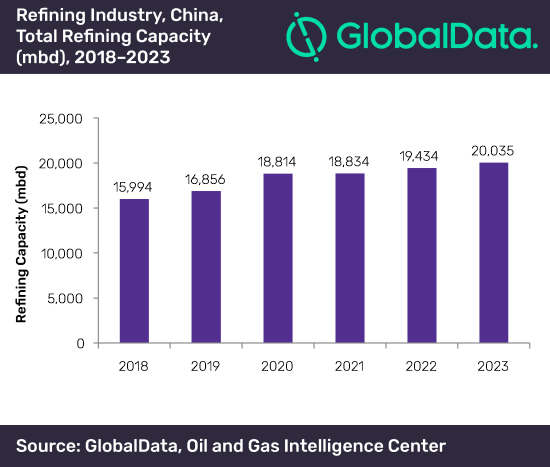 China is expanding its refinery capacity due to its industrial growth, and growing demand from the transportation sector. The refining capacity additions will drive China’s crude imports, and will further improve the country’s capability to export petroleum products.

GlobalData also forecasts that China’s total crude distillation unit capacity will increase from 15,954 mbd in 2018 to 19,994 mbd in 2023. There will be no condensate splitter capacity additions in China during the outlook period, which will remain the same at 36 mbd.

China has a total of 179 active crude oil refineries and around 12 planned and announced refineries are expected to commence operations by 2023. The top three active refineries in China, in terms of the crude distillation unit capacity, are Maoming, Zhenhai and Huizhou with 472 mbd, 462 mbd and 440 mbd, respectively. Dayushan Island refinery will be the largest planned refinery with planned crude oil refining capacity of 800 mbd in 2023, followed by Dalian III and Jieyang with 400 mbd each.

Eu and USA may have to join their efforts to catch up with China in many domaines?

Not so sure we want to increase refining; if anything, we should want to reduce the amount of crude we refine.

You can tell the idjits by the cluelessness of their questions.

As soon as DT is gone, USA will/should approach EU to join forces to try to better compete with China for world trade dominance. However, it may be too late. EU is progressively but rapidly integrating with China with a multitude of industries and moving away from US goods.

EU may be driving more affordable lighter electrified vehicles from China by 2020 or so. Norway, even with lots of Oil/Gas, is leading the way with 40+% new EVs. The other EU countries, with less or without Oil/Gas should follow soon.

Very high efficiency Heat Pumps from China (GREE and may others) will progressively replaced polluting Oil/Gas furnaces in EU, Canada and many countries.

... and the broken-record nature of their comments.