Researchers find bio-inspired high-tech surfaces on hulls could greatly reduce drag and CO2 emissions of ships; up to 1% of global CO2

If ship hulls were coated with special bo-inspired high-tech air trapping materials, up to 1% of global CO2 emissions could be avoided according to a new study by researchers from the University of Bonn together with colleagues from St. Augustin and Rostock. According to the study, ships could save up to 20% of fuel as a result of reduced drag. If antifouling effects are also considered—such as the reduced growth of organisms on the hull—the reduction can even be doubled. The open-access study appears in the journal Philosophical Transactions A.

Ships are among the worst fuel guzzlers in the world. Together, they burn an estimated 250 million tonnes per year and emit around one billion tonnes of carbon dioxide into the air—about the same amount as the whole of Germany emits over the same period. The main reason for this is the high degree of drag between hull and water, which constantly slows the ship down. Depending on the type of ship, drag accounts for up to 90% of energy consumption. This also makes it a huge economic factor: After all, fuel consumption is responsible for half of transport costs.

Drag can be significantly reduced using technical tricks. For example, “microbubbles technology” actively pumps air bubbles under the hull. The ship then travels over a bubble carpet, which reduces drag. However, the production of the bubbles consumes so much energy that the total savings effect is very small.

Novel high-tech coatings may offer a solution. They are able to hold air for long periods of even weeks.

Around ten years ago, we were already able to demonstrate on a prototype that in principle it is possible to reduce drag by up to ten percent. Our partners at Rostock University later achieved a 30-percent reduction with another material developed by us.

—co-author Dr. Matthias Mail, Nees Institute for Biodiversity of Plants at the University of Bonn

Since then, various working groups have taken up the principle and developed it further. The technology is not yet mature enough for practical use. Nevertheless, the authors forecast a fuel-saving potential of at least five percent in the medium term, but more likely even 20 percent.

In their paper, they calculated the economic and ecological advantages this would bring. For example, a commercial container ship on its way from Baltimore (USA) to Bremerhaven could reduce its fuel costs by up to $160,000. Worldwide, emissions of the greenhouse gas carbon dioxide would be reduced by a maximum of 130 million tonnes.

Taking into account the reduced growth of barnacles and other aquatic organisms, which causes enormous additional drag loss, this quantity even rises to almost 300 million tonnes. This corresponds to almost one percent of global CO2 emissions.

Of course, these figures are optimistic. But they show how much potential this technology has.

The high-tech layers are based on models from nature, such as the floating fern Salvinia molesta. This is extremely hydrophobic: When submerged and pulled out again, the liquid rolls off it immediately. After that, the plant is completely dry. Or to be more accurate: it was never really wet in the first place. Underwater, the fern wraps itself in an extremely thin dress of air. This prevents the plant from coming into contact with liquid—even during a many weeks-long dive. Scientists call this behavior “superhydrophobic”. 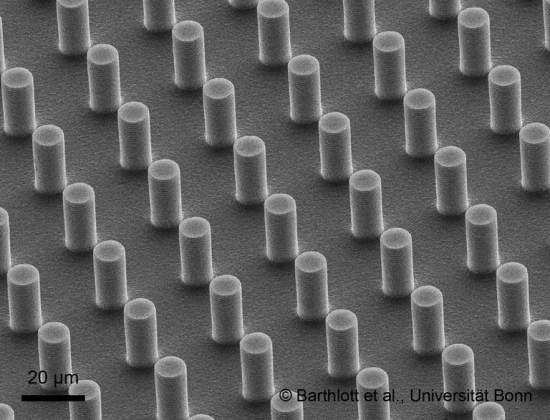 Scanning electron microscope image of a surface that is modeled on that of Salvinia. © Prof. Dr. Wilhelm Barthlott/University of Bonn

Salvinia has tiny egg-beater-like hairs on the surface of its leaves. These are water-repellent at their base, but hydrophilic at their tip. With these hair-tips, the aquatic fern firmly “pins” a water layer around itself. Its little dress of trapped air is kept in place by the water layer.

or just travel more slowly.
https://transportgeography.org/?page_id=5955
I imagine coating the hull of a container ship would be a mammoth task, not suited for 20 nm pitch microstructures.
On the other hand, there might well be military applications, such as torpedoes. The Russians already have supercavitating torpedos,
https://en.wikipedia.org/wiki/Supercavitating_torpedo
which are very hard to defend against as they go at 200 knots.
(Watch out aircraft carriers.)

Switch over from the bunker oil fueled diesels to LNG gas turbine/electrics while you develop hydrogen powered electric hybrids. Spend the money where it does the most good for the World and at the same time recovers space to carry more cargo.

It makes a lot more sense to me to electrify ships, where battery weight is not such a problem, compared to aircraft, where weight is a critical parameter.
@lad, yes, a good idea, reasonably easy to implement in existing ships (assuming you have the space for the gas tanks).

Reducing 1% of global CO2 from a change in materials is simply amazing. It will also reduce loads of other pollutants in the process. Unless the material is derived from nuclear waste or something..

Is it really around a million dollars of fuel to send a ship back and forth? That's shocking..

Why would deriving the material from "nuclear waste" be a problem?  Recovered plutonium, neptunium, americium etc. makes perfectly fine nuclear fuel for fast-spectrum reactors, and it gets rid of the stuff permanently in the bargain.  They've also got amazing power density.  The EBR-II produced 19 megawatts of electric power from an active core about the size of a football.

Cargo ships are limited by their displacement.  Batteries weigh a lot more than petroleum; even if you could carry enough of them for a voyage, you'd be forced to carry less cargo than if you were running on oil.  That directly hits your revenues.  The battery-powered ships we've been reading about here are all short-haul vessels like ferries which recharge at every stop.

If you really want to get rid of emissions from ships, nuclear is the way to go.  The NS Savannah was taken out of service just before the OPEC oil embargo would have made it an enormous success.

That nuclear energy, far safer by any credible measure than any fossil fuel and even safer than hydro energy, managed to acquire a reputation so besmirched is testament to the vast capacity of humans to be hoodwinked. Such an ideal fit for ship propulsion could not compete with the national shunning of "dangerous" nuclear in favor of "safe" coal in the 1970s and 80s.