EIA projects decline in transportation sector energy consumption through 2037 despite increase in VMT, followed by increase

EIA’s Annual Energy Outlook 2019 projects continued robust growth in US energy production, emergence of the United States as an energy exporter, and a cleaner S electric power generation mix. For the Transportation sector, EIA projects that energy consumption will decline between 2019 and 2037 (in the Reference case) because increases in fuel economy more than offset growth in vehicle miles traveled (VMT). 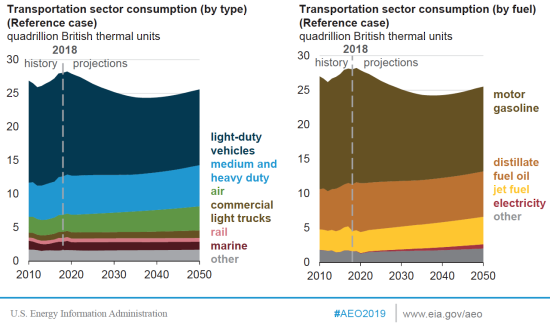 The Annual Energy Outlook 2019 (AEO2019) includes a Reference case and six side cases designed to examine the robustness of key assumptions.

Over the same period, truck vehicle miles traveled, the dominant mode of freight movement in the United States, grows by 52%, from 397 billion miles in 2018 to 601 billion miles in 2050 as a result of increased economic activity. Freight rail ton-miles grow by 20% during the same period, led primarily by rising industrial output. However, US coal shipments, which are primarily via rail, decline slightly.

Domestic marine shipments decline modestly during the projection period, continuing a historical trend related to logistical and economic competition with other freight modes.

Energy use per passenger-mile of travel in light-duty vehicles declines nearly 40% between 2018 and 2050 as newer, more fuel-efficient vehicles enter the market, including both more efficient conventional gasoline vehicles and highly efficient alternatives such as battery electric vehicles. Light-duty vehicle energy efficiencies are affected by current federal fuel economy and greenhouse gas emission standards.

Energy use per ton-mile of travel by freight modes decreases, led by increases in the fuel economy of heavy-duty trucks across all weight classes as the second phase of heavy-duty vehicle efficiency and greenhouse gas standards takes full effect in 2027.

Sales of longer ranged 200- and 300-mile BEVs grow during the entire projection period, tempering sales of the shorter-range 100-mile BEV and PHEV. 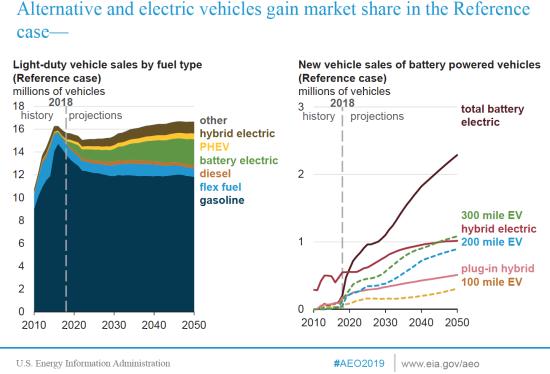 EIA also finds that consumption of transportation fuels will grow considerably in the Reference case between 2018 and 2050 because of increased use of electricity and natural gas. 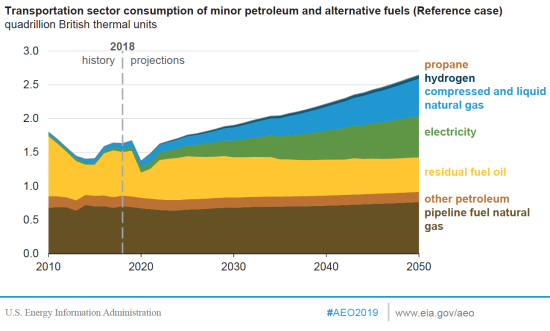 Other findings. The AEO2019 Reference case also projects significant continued development of US shale and tight oil and natural gas resources, as well as continued growth in use of renewable resources.

The AEO2019 Reference case projects that in 2020, for the first time in almost 70 years, the United States will export more energy than it imports, and will remain a net energy exporter through 2050. US energy export growth is driven largely by petroleum exports including crude oil and products, and by additional liquefied natural gas exports. These trends have become clearly established, and the Reference case shows them continuing for the next few years, and then slowing and stabilizing.

EIA’s Reference case also highlights the impact of sustained low natural gas prices and declining costs of renewables on the electricity generation fuel mix. Natural gas will maintain its leading share of electricity generation and continue to grow, increasing from 34% in 2018 to 39% in 2050. The renewables share, including hydro, also increases from 18% in 2018 to 31% in 2050, driven largely by growth in wind and solar generation.

US net exports of natural gas will continue to grow, as liquefied natural gas becomes an increasingly significant export. In the Reference case, U.S. liquefied natural gas (LNG) exports and pipeline exports to Canada and to Mexico increase until 2030 and then remain fairly constant through 2050 as relatively low, stable natural gas prices make US natural gas competitive in North American and global markets.

If all the current autoco's follow through on their electrification plans it makes one wonder who'll be making all the ICE vehicles needed in 2050?

Maybe US will become like Cuba with all their vintage autos.

Since they are way off on their assumptions about the transition to EVs, the conclusions of this article are worthless. I'm estimating that they won't get it right until ~2023 to 2025.

One can hope that they are wrong and electrified vehicles (cars, suvs, trucks, buses, trains, ships, airplanes) and REs will penetrate the market much faster. If not, let's be ready for more warmer adverse weather and rising sea level?

Can we rely on China, Japan, So-Korea, California and EU to lead in the fight to reduce pollution and GHGs?

This is encouraging.
Play at 2x speed so that it only takes 35 mins to get through.
Pour yourself a glass of wine or beer and enjoy.
https://youtu.be/duWFnukFJhQ
Tony Skiba on the disruptive nature of clean energy and EVs.

maybe this link will be easier to click on

Deloitte has been pretty accurate as have most of the other Big Mojo consulting firms over the past few years, and Tony Seba will shrink into history like nameless nutty futurists describing jet packs and supersonic commercial transport for the masses.

Electrification is still going to happen at a wonderful pace. The fact that mobility is finding its way into vast blocs of the global population while HC fuel use shrinks or even remains stable is great news, and it makes me very, very happy. Rejoice!

But there will be far more EVs than demanded at realistic market prices through 2028. In other words: the sale of ICE or various electrified ICE vehicles will subsidize EVs for another decade (at least) through tax penalties, direct subsidy by governments and/or through mandatory purchase of credits a la CARB ZEV charities, within large diversified manufacturers as EVs are sold at losses, or by incinerating investment capital.

That'll still work, just not as fast as academics and "visionaries" imagine.