ICCT quantifies the EV charging infrastructure gap across US markets

In a new white paper, the International Council on Clean Transportation (ICCT) has quantified the gap in charging infrastructure across the 100 most populous US metropolitan areas in the US to power more than 3 million expected electric vehicles by 2025.

Broadly, the team found that of the 100 areas, 88 had less than half of the total needed charging infrastructure in place, based on their expected electric vehicle growth. 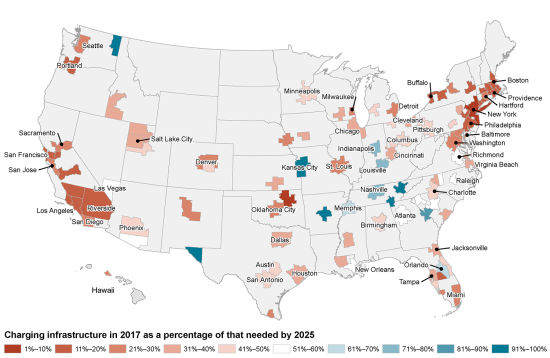 The figure illustrates the deployment of public and workplace charging infrastructure through 2017 as a percentage of what will be needed by 2025 across the 100 most populous US metropolitan areas (the 50 most populous are labeled). Shades of red indicate that less than 50% of the needed charging has been installed through the end of 2017, while blues indicate that more than 50% of charging needed in 2025 was in place by 2017.

The authors said that their analysis led to three high-level conclusions:

This is an anti-EV red herring; most EV drivers will charge at home on the off hours like I've done for 8 years...my car doesn't even have a DC charge port and I don't miss it.

The people who buy an EV know well before they buy what their charging routine will be and how they are going to "fuel their EV" before they buy...only the less-intelligent will buy an EV and depend on Public charging.