Global anthropogenic fossil CO2 emissions increased by 1.2% in 2017 compared to the previous year, reaching 37.1 gigatonnes (Gt) CO2, according to the latest report by the European Commission’s Joint Research Centre (JRC). The report provides the CO2 emissions trends for all countries across the globe from 1970 through 2017. 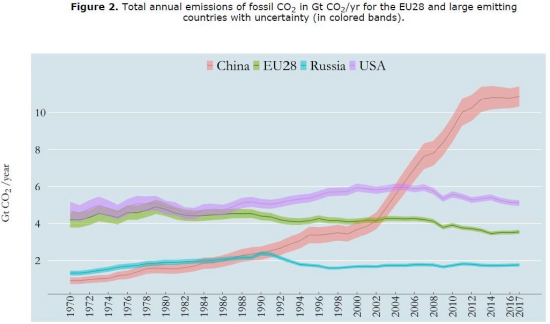 Per capita emissions in the EU are now below those of China and half of those in the US. The CO2 intensity of the EU economy is around one-third below the US and around two-thirds below China.

It's not looking good, T.

The key players are China, USA and EU. China has to do a lot more to reduce pollution and GHGs.

India and Brazil may be next on the list of the major polluters.