With access to terminals, railways, pipelines and waterways nearby, the Beaumont refinery is strategically positioned to benefit from Permian production growth. The addition of a third crude unit in Beaumont will enhance the refinery’s competitive position and truly establish it as a leader in the U.S. refining industry.

Startup of the new unit is anticipated by 2022. The project is expected to create up to 1,850 jobs during construction and between 40 and 60 permanent jobs once completed. 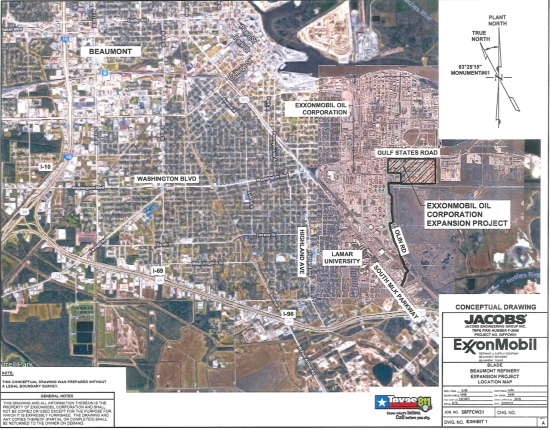 ExxonMobil previously announced plans to build and expand manufacturing facilities in the US Gulf region as part of its Growing the Gulf initiative. Growing the Gulf projects include expansion of Beaumont’s polyethylene capacity by 65%; a new unit in Beaumont that increases production of ultra-low sulfur fuels; and a new 1.5 million ton-per-year ethane cracker at the company’s integrated Baytown chemical and refining complex in Texas.

ExxonMobil’s integrated operations in Beaumont include a 366,000 barrel-per-day capacity refinery, as well as chemical, lubricants and polyethylene plants. It produces 2.8 billion gallons of gasoline annually.

ExxonMobil has approximately 2,100 employees in the Beaumont area and its operations account for approximately 1 in every 7 jobs in the region. The Beaumont refining facilities were originally built along the banks of the Neches River in 1903, during the Spindletop oil boom.

There goes our climate. Commit to drive electric and to go plastic free.