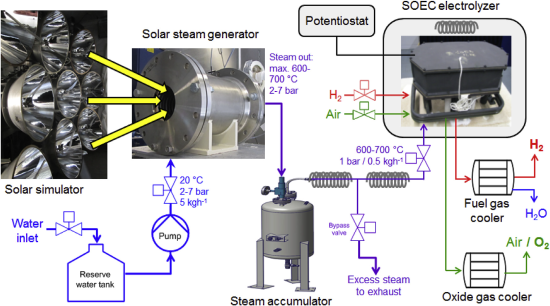 Hot steam with a maximum flow rate of 5.0 kg h−1 was produced with the solar steam generator. A small fraction (0.58 kg h−1) mixed with 10% of H2 was supplied to a 12-cell solid oxide electrolyzer stack with approx. 2 kW electrical power.

At 770 °C and a current density of −1.25 A cm−2 a steam conversion rate of 70% at 93% electrical electrolyzer efficiency was achieved. A paper on the work is published in the Journal of Power Sources.

In the context of a wider use of renewable energy sources such as wind, photovoltaic and solar thermal power chemical energy carriers are needed for electricity storage due to the intermittent availability of renewable energy sources to maintain the high stability of the electricity infrastructure. Water electrolysis is considered as a promising pathway for the production of sustainable hydrogen to be used as such an energy carrier. Alkaline electrolysis, as a well proven technology for many decades, and more recently proton exchange membrane (PEM) electrolysis, are currently developed for high-performance intermittent operation in the low temperature range, below 100 °C.

Compared to the low temperature electrolysis techniques, solid oxide electrolysis (SOE) operating in the high temperature regime of 700–1000 °C is a promising new technology which offers some additional advantages. The significantly higher operating temperature of solid oxide electrolysis cells (SOEC) and stacks results in faster reaction kinetics, thus enabling potentially higher electrical efficiency. From a thermodynamic point of view, part of the energy demand for the endothermic water splitting reaction can be provided by high temperature heat from solar thermal power or waste heat from industrial processes, hence, significantly reducing the electric energy demand. Furthermore, high temperature electrolysis allows to not only split molecules of water steam but also that of carbon dioxide or a mixture of both to produce synthesis gas or other energy carriers such as methane or methanol by subsequent catalytic conversion.

… In conventional high temperature steam electrolysis the total energy demand for water splitting is supplied as electricity. As mentioned before, high temperature heat provided by concentration of solar radiation, e.g. in solar towers, can be introduced in the SOE process for the evaporation and superheating of water. A tube-type solar receiver as a key component for the integration of solar heat into the SOE process has been developed for operation in DLR’s high flux solar simulator in Cologne. In the frame of the DLR project “Future Fuels” the combination of this solar receiver powered by heat from the solar simulator with a solid oxide electrolyzer has been realized. This paper presents the experimental setup as well as first experimental results of the coupling of direct solar steam generation in a receiver system with high temperature steam electrolysis. 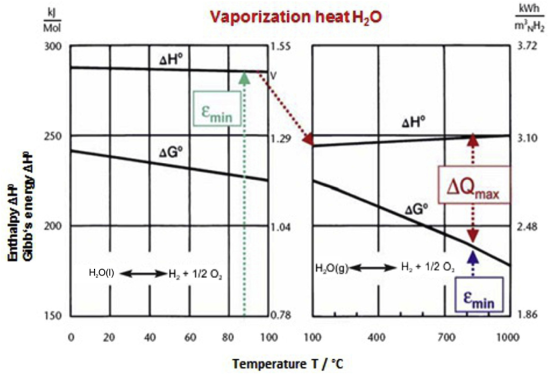 Thermodynamics of the water splitting reaction as a function of temperature. Schiller et al.

In their work, steady-state operation at 700 °C and −1.0 A cm−2 was performed for 4h in total demonstrating that SOEC operation with solar heat is feasible and promising. During this time 1,600 L of H2 were produced in total.

The experiment showed strong interaction between stack behavior and steam mass flow. It is therefore crucial to control the steam mass flow properly. Further system optimizations include the reduction of peripheral heated tubes, the increase of thermal insulation of the system components and the development of a high temperature steam accumulator. The experiment reported represents to the authors’ knowledge the first successful integration of solar heat into commercial solid oxide electrolysis for highly efficient hydrogen production.

An important advance for where batteries or direct electrical power can not be used. The 1600L of H2 required more electrical energy (8 kwh) than the 5 to 6 (LHV to HHV) kwh the H2 contains.

That would be equivalent to about $0.74/kg at the current H-Q industrial rate for Hydro/Wind clean electricity?

You're counting outputs, AlzHarvey.  Not inputs.

4.8/8 = 0.6, or 60% efficiency so how do they come up with 93%. Considering that a substantial energy input comes from the heated steam which doesn't seem to be considered in the input and that the generally accepted efficiency for electrolysis around this site seems to be around 70% the results of this pilot don't seem impressive?

Based on 60% efficiency the input to produce 1 kg would be 56 kwh. The best rate I can find on the hydro Quebec website is 3.1 cents?

Calgarygary: 3.1 Cents/kWh CAN or about 2.3 cents US/kWh is for advertised industrial rate. Very large users (like Aluminum plants) get a lower 24/7 rate. A much lower off peak rate could be contracted.

SAEP: I used your own figures???

When a system efficiency of 80% is reached and 2 cents US/kWh is used, the input energy cost would be around 90 to 92 cents/Kg. Current electrolysers in Norway are very close to this type of efficiency.

I used your own figures???

You used the figure for the product as if it was the energy input and calculated a cost for it.  This is a rather glaring error leading to a nonsense result.  Though I do have to admit, actually calculating a number is progress for you.

Cost and efficiency figures can change on a daily basis and all factors are rarely fully considered. It is too easy to arrive (manipulate) results, specially with NNPs, CPPs and NGPPs.