A new report from the European Environment Agency (EEA) warns that the health of Europe’s most vulnerable citizens remains disproportionately affected by environmental hazards such as air and noise pollution and extreme temperatures, especially in Europe’s eastern and southern regions, despite overall improvements in Europe’s environmental quality. 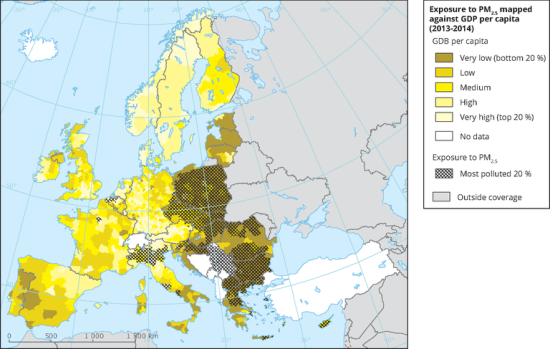 The map uses a color gradient to show the GDP per capita per NUTS3 region, classified in quantiles against the highest exposure to PM2.5 pollution represented as hatched areas (only the top 20% of PM2.5 are shown). Source: EEA.

The EEA report “Unequal exposure and unequal impacts: social vulnerability to air pollution, noise and extreme temperatures in Europe” draws attention to the close links between social and environmental problems across Europe. The distribution of these environmental threats and the impacts they have on human health closely mirror differences in income, unemployment and education levels across Europe.

While EU policy and legislation over past decades have led to significant improvements in living conditions, both economically and in terms of environmental quality, regional inequalities persist. The report stresses that better alignment of social and environment policies and improved local action are needed to successfully tackle environmental justice issues.

The European Union (EU) as a whole has made significant progress over past decades in reducing air pollution and Member States have implemented various EU policies to improve climate change adaptation. The EU’s regional policy has proved its effectiveness in helping to address social and economic inequalities. A number of regional and city authorities are also proactive in reducing the impact of the environmental hazards on the most vulnerable members of society:

It is important to be aware of the change worldwide. Best Air Monitor for home