Distance driven in the United States: Did we reach the peak in 2004?

This article is the latest publication in a series examining recent changes in various aspects of motorization in the United States. The focus here is on distance driven per person and per household, as opposed to the absolute distance driven (which depends, in part, on the continuously increasing size of the U.S. population). The period covered is 1984 through 2017.

Distances driven by all light-duty vehicles (passenger cars and light trucks) were obtained from the Federal Highway Administration. The other data that were used in the calculations came from ProQuest (resident population) and the U.S. Census Bureau (households).

The chart below shows the distance-driven rates per person and per household. 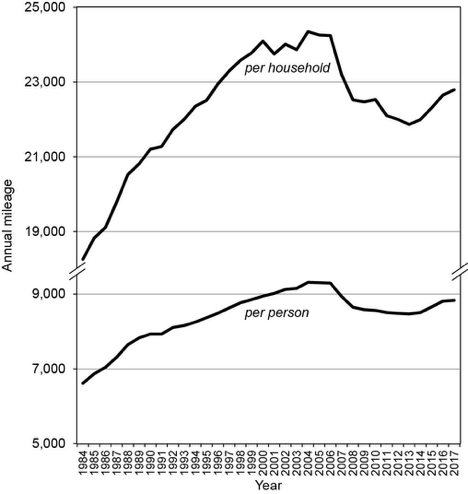 The main findings (summarized in the table below) are as follows:

Wonder if this includes miles driven by taxi services?
More young people and people living in a large city are opting to not buy a car, but still take taxis.

It may be DT's fault. As soon as he got elected, people started to earn more and drive more? Cheaper gas is another factor?

Ever get caught in "today's rush hour traffic"? I rest my case.

Yes Lad, rush hours traffic is getting worse year by year, specially during winter months in our area. A switch to e-vehicles will/may not help much.

The solution may come with many more public e-buses, e-trains and subways but we (users + governments + general public) will have to pay, specially for the very high initial cost.? Alternatively, a major increase (to $25+/8-hr day) for down town parkings could help.