Researchers at MIT have created a new technique that allows the observation of a metal surface during hydrogen penetration—the process that results in embrittlement of the metal.

The new way of observing the embrittlement process as it happens may help to reveal how the embrittlement gets triggered, and it may suggest ways of slowing the process—or of avoiding it by designing alloys that are less vulnerable to embrittlement. The findings are published in a paper in the International Journal of Hydrogen Energy. 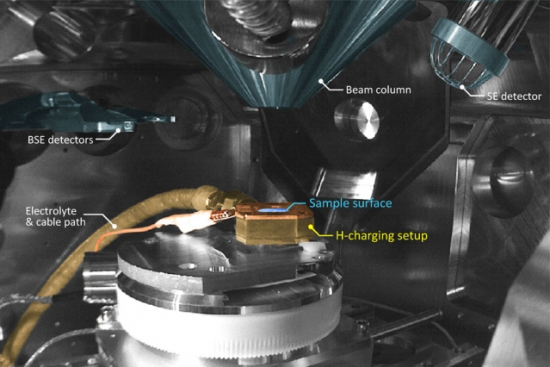 Hydrogen embrittlement is a common phenomenon in high strength metallic materials, and a critical and long-pending problem for various industries. Several mechanisms have been suggested to elucidate the hydrogen-induced phenomena. However, due to the small size and high mobility of hydrogen atoms in metals, it has been challenging to set correlations between local hydrogen distribution, microstructure and mechanical response. A fruitful approach to overcome this challenge is to couple in situ micro-mechanical testing techniques with in situ hydrogen charging. Rather than probing the average mechanical response, i.e., by testing in high-pressure hydrogen gas or electro-chemical charging before or during testing, these approaches probe the micro-mechanical response of a well-defined microstructural volume, in well-defined mechanical boundary conditions, in an in situ manner. In most cases, the goal thereof is not determining application-relevant engineering properties, but instead unravelling fundamental insights regarding hydrogen effects.

… In situ microstructural observation during hydrogen charging has been limited by difficulties in managing hydrogen sources during testing and by high vacuum environment that is generally essential for high-resolution microstructural analysis techniques.

… Here, we propose a new in situ hydrogen-charging setup which enables microstructural and mechanical analysis during electrochemical hydrogen permeation even in high vacuum-based systems such as scanning electron micro- scopes (SEM). Using the setup, a clean, fine-polished surface of micrometer-to-millimeter scale can be observed and tested during hydrogen charging.

The key to the new monitoring process was devising a way of exposing metal surfaces to a hydrogen environment while inside the vacuum chamber of a scanning electron microscope (SEM). Because the SEM requires a vacuum for its operation, hydrogen gas cannot be charged into the metal inside the instrument, and if precharged, the gas diffuses out quickly.

Instead, the researchers used a liquid electrolyte that could be contained in a well-sealed chamber, where it is exposed to the underside of a thin sheet of metal. The top of the metal is exposed to the SEM electron beam, which can then probe the structure of the metal and observe the effects of the hydrogen atoms migrating into it. 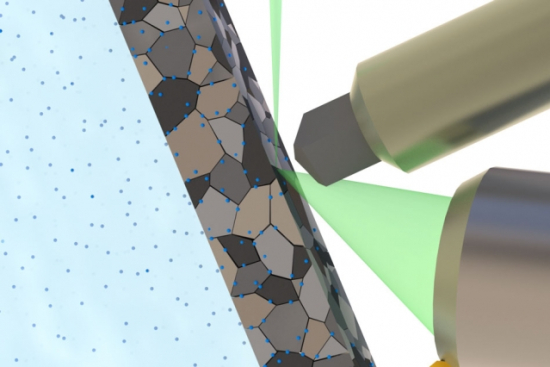 This illustration depicts the main elements of the system the team used: The multicolored slab at center is the metal layer being studied, the pale blue region at left is the electrolyte solution used as a source of hydrogen, the small blue dots are the hydrogen atoms, and the green laser beams at right are probing the process. The large cylinder at right is a probe used to indent the metal to test its mechanical properties. Courtesy of the researchers.

The hydrogen from the electrolyte “diffuses all the way through to the top” of the metal, where its effects can be seen, says Thomas B. King Assistant Professor of Metallurgy C. Cem Tasan. The basic design of this contained system could also be used in other kinds of vacuum-based instruments to detect other properties. “It’s a unique setup. As far as we know, the only one in the world that can realize something like this,” he says.

In their initial tests of three different metals—two different kinds of stainless steel and a titanium alloy—the researchers have already made some new findings. For example, they observed the formation and growth process of a nanoscale hydride phase in the most commonly used titanium alloy, at room temperature and in real time.

The work was supported by the Exelon Corp.