Volkswagen has revealed some of the features of the updated Passat, which will launch later this year. Among the technical updates are an upgrade to the plug-in hybrid system in the Passat GTE that extends the all-electric range to to up to around 55 km (34 miles) in the WLTP cycle (approximately 70 km (43.5 miles) in NEDC) and the introduction of features from the IQ.DRIVE suite of developing autonomous driving technologies. 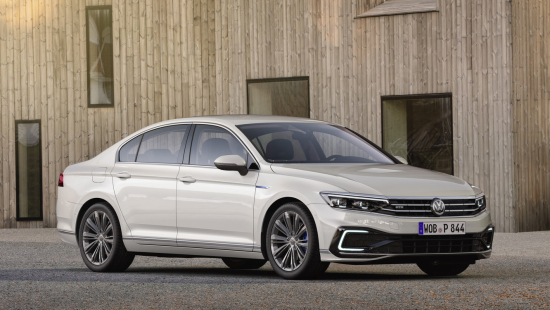 The 30 millionth Passat will leave the assembly line this spring, making it the most successful mid-size model worldwide. After the Golf (35 million vehicles), and ahead of the Beetle (21.5 million units), the Passat is one of the three most popular vehicles from Volkswagen to date.

Passat GTE and Passat Variant GTE. Volkswagen will launch the new Passat GTE with an enhanced plug-in hybrid drive as both sedan and wagon models. The GTE models with their combination of electric drive motor and efficient turbocharged gasoline engine (160 kW / 218 PS system power) provide the benefits of a long-distance vehicle. On the other, they can be used as a zero-emission vehicle in the urban environment. 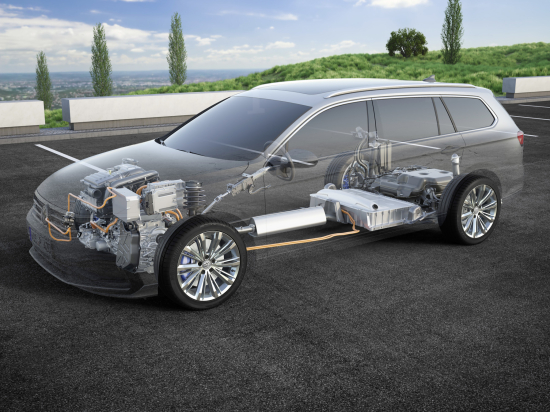 The new GTE is equipped with a larger battery: 13.0 kWh up from 9.9 kWh, a boost of 31%. The pure electric range was thus extended correspondingly. This is now up to approx. 55 km in the new, realistic WLTP cycle; this is equivalent to a range of around 70 km in the old cycle (NEDC). 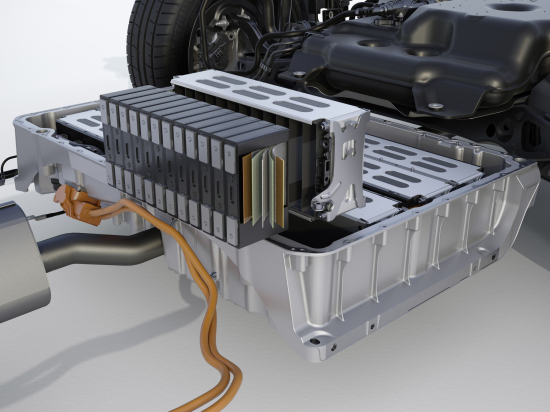 In addition, a new operating mode configuration has made it much easier to reserve sufficient battery capacity for the target destination in a city. The Passat GTE always starts in E-MODE if the lithium-ion battery is sufficiently charged. The high-voltage battery in the Passat GTE models can be charged via the external electricity grid or via the internal TSI engine and recuperation during the journey.

In order to be able to travel in E-MODE in town at the end of a longer trip, Volkswagen has reconfigured the operating modes of the hybrid system and therefore simplified battery recharging during the journey. Instead of the previous five operating modes, there are now only three:

Charging via the electricity grid. The Passat GTE is equipped with a 3.6 kW battery charger. When connected to a conventional electrical grid with 230 volts / 2.3 kW, the battery—if fully depleted—will be fully charged within six hours and 15 minutes. The charging time falls to four hours with a wall box or a charging station with 360 volts / 3.6 kW.

Charging starts with connecting the plug. Delayed charging is another available option. The time delay can be set using either the Infotainment system or an app. The charging process can also be activated directly via the app – in much the same way as a remote control.

In addition to the charging process, the temperature inside the vehicle can be raised or lowered via the time pre-set function.

Overview of drive components. The new Passat GTE is powered by a turbocharged stratified injection engine (1.4 TSI) and an electric motor. This TSI engine delivers 115 kW / 156 PS. The electric motor generates precisely 85kW / 115 PS. The new high-voltage battery—located in the vehicle floor in front of the rear axle—supplies the electric motor with power.

For power transmission, the Volkswagen is equipped with an automatic 6-speed dual-clutch gearbox (DQ400E) developed especially for use in hybrid vehicles. Other components of the hybrid drive include power electronics (this converts the battery’s direct current into alternating current for the electric motor) and the battery charger.

IQ.DRIVE is the new umbrella brand for Volkswagen assistance systems; the technologies involved in autonomous driving will be bundled under the IQ.DRIVE label. The new assistance systems in the Passat include Travel Assist, Emergency Steering Assist, and ACC with predictive cruise control.

The Travel Assist feature, which appears in a Volkswagen for the first time, allows for partially automated driving across practically the whole speed range up to 210 km/h.

Like with the predecessor system Traffic Jam Assist, the adaptive cruise control ACC is responsible for longitudinal guidance in Travel Assist, while the Lane Assist adaptive lane guidance system handles lateral guidance. While this automatic longitudinal and lateral guidance system was only available up to a maximum of 60 km/h in connection with Traffic Jam Assist, the Travel Assist option in the new Passat enables partially automated driving up to 210 km/h.

The driver must permanently monitor the system in Level 2 for legal and safety reasons. To ensure this, Travel Assist monitors whether the driver has hands on the steering wheel. This is more convenient in the new Passat than ever before as a direct result of the first capacitive steering wheel from Volkswagen.

Furthermore, if the driver lets go of the steering wheel for more than around 10 seconds, then a series of warning signals (visual, acoustic, braking jolt) are issued. The driver must react by this point at the latest and touch the steering wheel, otherwise Emergency Assist is activated and the Passat is automatically brought to a stop.

ACC with predictive cruise control. The latest generation of adaptive cruise control—ACC—incorporates predictive cruise control. Up until now, the system in the Passat was a pure Adaptive Cruise Control system: just set the desired speed—braking and accelerating was then carried out by the Adaptive Cruise Control. This proven feature will also be offered in the new Passat. From now on, the new, predictive ACC will be available as an additional option. In combination with the navigation system and Dynamic Road Sign Display, the system can also react to variable parameters such as speed limits.

ACC with predictive cruise control calculates the vehicle position based on the route and GPS data and reduces the vehicle speed before reaching bends, roundabouts, junctions, speed limits and towns. At the same time, ACC accesses the Dynamic Road Sign Display via the front camera (new generation MFK 3.0) and adjusts the speed as soon as a speed limit is detected.

On leaving an area with reduced speed, ACC with predictive cruise control accelerates the Passat automatically until it reaches the maximum speed limit valid for a given section of road. The radar sensor from the current ACC takes over the safety function in the front and adapts the distance to the vehicle in front. If the Passat is fitted with DSG, the ACC becomes a traffic jam and stop-and-go assistant, as the vehicle also moves off again automatically when equipped with the dual clutch gearbox. The latest generation ACC is no longer a passive system. Instead, it is an active system that improves convenience and safety. The driver can override the predictive ACC at any time by operating the accelerator pedal or brake.

The Passat is offered with the Lane Assist lane keeping system as standard. The system correctively steers if the vehicle is about to leave the lane. Lane Assist recognizes the relevant road lane markings using a camera that is integrated at the top of the windscreen. The new multifunction camera MFK 3.0 can be found in the Passat, via which lateral guidance is improved further. The system can recognize both grass and the boundary lines of the lane via the newly integrated “Road Edge Recognition” system.

A typical example of such a situation is a vehicle driving on a country road before braking to a sudden stop. The driver behind intuitively carries out an evasive maneuver in response. Such evasion is more agile and controlled in the new Passat due to targeted braking intervention from the assistance system. The vehicle is also stabilized when quickly pulling back into lane and potential turning in is prevented within the system limits. The new Emergency Steering Assist enhances active safety on country roads and highways.

2.0 TDI Evo. An additional highlight is the availability of the newly developed 2.0 TDI Evo—a highly efficient turbo diesel engine with an output of 110 kW / 150 PS that produces 10 g/km less CO2 compared with the equivalent engine in the predecessor. The 2.0 TDI Evo is the forerunner of a new generation of diesel engines.

All TSI and TDI units fulfil the requirements of the Euro 6d-TEMP emission standard. In addition, every new Passat—whether a gasoline or diesel engine—is equipped with a particulate filter.

Pre-sales of the updated Passat will start in May in some European countries and the market launch will start from the end of August onwards (Germany).

Now I want another Passat.

Why not the new millerized 1.5-liter engine?

One confusing issue is if only the 110 kW diesel would be of the "Evo" version, or if the other three diesel engines are also Evo versions?

@peter,
"The 2.0 TDI Evo is the forerunner of a new generation of diesel engines."
so it looks like the 110 is the only Evo for now.
It slots in between the 88 and 140 kw TDi's so it probably at the sweet spot in terms of sales. The PHEV sounds great, but how much will it cost ?
Also this: "partially automated driving across practically the whole speed range up to 210 km/h." - we are in Germany now ...!

@mahonj
It sounds strange to me that they would change only one of the diesel engines but the 140 and 176 kW cited are actually the power levels of the old type of engine. In some Audi cars, that were first with the Evo engine, a 150 kW Evo engine replaces the old 140 kW engine. I have not seen the power level of the coming bi-turbo version of the Evo engine but it is likely it would be in the range of 180+ kW, instead of 176 kW. Thus, it appears that they actually keep three of the old diesel engines, i.e. replace only the old 110 kW engine, as well as keeping the 1.4 TSI engine for the PHEV. Moreover, this strategy is strange on the background that they had to certify all engines, old and new, to Euro 6d-TEMP. Just looking at the emission aftertreatment used, the Evo engine should be much cleaner than the old engine but they can, of course, meet the new emission limits also with the old engines.

I did not comment on the fact that the 1.4 TSI in the PHEV, as all gasoline engines in the new Passat, now use a particle filter (GPF), in contrast to the old version that did not use a filter. In independent tests by ADAC in Germany, who use tougher test methods than the official tests, the particle number emission (PN) for the old Passat was: 17.89881 E+11/km (PHEV) and 0.06931 E+11/km (2.0 TDI), respectively. The relative difference was a factor of 258 (I suppose diesel haters will have a problem with these results…), although I, personally, would not report as many digits as ADAC. GPFs are generally not as effective as their DPF counterparts but nevertheless, we can expect very low PN levels from the new Passat PHEV.

My final comment is that there is no point in looking at the particle mass emissions (PM) for these cars, since the method cannot measure accurately at low levels. It only works properly on old cars with very high PM emissions. And, sadly, this method is still used by US EPA – and will continue to be used also in the foreseeable future – since EPA apparently refuses to introduce the PN method.