XL, a provider of connected vehicle electrification solutions for commercial, utility and municipal fleets, will unveil a plug-in hybrid electric version of the popular Ford F-250 pickup truck at the NTEA Work Truck show, 5-8 March in Indianapolis. In 2018 at the NTEA show, XL displayed a hybrid-electric F-250, as well as the plug-in hybrid F-150. (Earlier post.)

The F-250 PHEV represents a continued expansion of the company’s successful plug-in hybrid electric (PHEV) product family, which also includes the PHEV Ford F-150 that the company began shipping in 2018 to municipal and utility fleets including CPS Energy, Tacoma Public Utility, City of Palo Alto, and others. 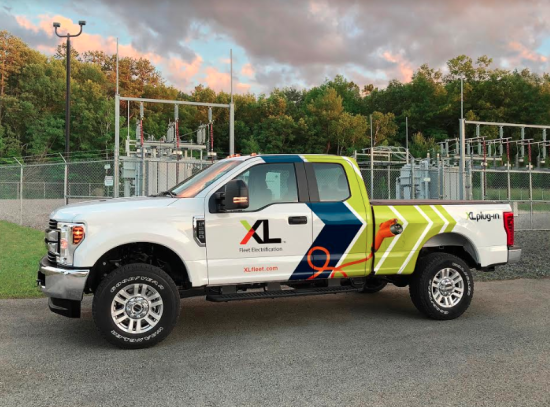 As with the PHEV F-150, which has been shown to provide up to a 50% MPG improvement and 33% CO2 emissions reduction, the PHEV F-250 will include a driveshaft-mounted electric motor powered by a lithium-ion battery pack that can be charged using standard level 2 and 1 chargers.

The truck will also feature regenerative braking, enabling it to store energy in the battery while slowing and then use that energy to help propel the vehicle during acceleration.

Because the XL plug-in hybrid electric system works in parallel with the factory gas-powered engine, fleets will not need to be concerned over vehicle range, performance or infrastructure requirements, and XL’s Ford eQVM certification ensures that all standard OEM warranties on the vehicle will remain intact.

Product specifications will be available during the NTEA show, and XL will display a PHEV F-250 in its booth (#3175).

New execs. XL also has added two new members to its executive team, with deep experience in the commercial fleet industry, and with leadership backgrounds across finance, sales, business development and operational excellence. Anna Durham is an accomplished senior executive and board member who has joined XL as its new Chief Operating Officer. Previously, Anna served in senior operations and finance leadership roles across multiple international divisions of GE Capital, including as COO of GE Capital France, President of GE Industrial France and General Manager of GE Capital’s Fleet Maintenance and Safety business. Most recently, Anna served as COO of Xamax Industries, a leading specialty materials provider.

XL also announced the addition of Brian Piern as its Vice President of Sales and Marketing. Brian has more than 20 years of leadership experience in marketing, product management and sales and has spent the past 12 years in the fleet industry, joining XL from Element Fleet Management, where he served as Senior Vice President of Sales. Previously, Brian served as a Senior VP of GE Capital as well as Director of New Business Development at Schneider National.

To further illustrate its growth trajectory, the company also reported record sales for 2018, with more than 65% revenue growth over 2017 totals.