Transmission system operator TenneT and Daimler AG, through its wholly owned subsidiary Mercedes-Benz Energy GmbH, have researched and tested the feasibility of innovative system services in the transmission grid as part of a joint development partnership. The project partners have shown in the Kamenz test lab that automobile battery storage systems can perform the job of system stabilisation for large-scale power plants.

The joint study was carried out within the framework of the Enera project as part of the “Smart Energy Showcases – Digital Agenda for the Energy Transition” (SINTEG) funding program by the German Federal Ministry for Economic Affairs and Energy.

The project partners have shown that Li-ion automobile battery storage systems can be used for highly dynamic system support and system recovery—specifically for a black start in power plants and to support mass inertia. Ultimately, this can help to compensate for the loss of conventional energy generation.

The partners installed a prototype battery storage system made up of automotive batteries with a total connected load of approximately 1 megawatt (MW) and a storage capacity of 750 kWh at the test centre in Kamenz. These are second-life and replacement batteries.

Electricity production is becoming considerably more volatile due to the increasing in-feed of weather-dependent forms of renewable energy. In the power grid, generation and consumption need to be balanced in order to maintain a frequency of 50 Hertz. If this is not the case, frequency deviations can occur. 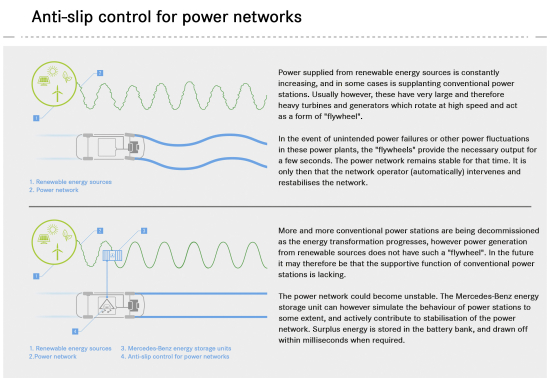 The masses of large-scale power plants, which rotate in synchronisation with the grid frequency of 50 Hertz, ensure that these fluctuations are dampened so that the system responds to these deviations in a more inert way. This is important, as frequency deviations can only be compensated with a delay through primary balancing power.

Without the inert masses in the grid, the frequency would change so quickly that no compensation through balancing power would be possible. This would lead to ever-greater frequency deviations, which in the worst-case scenario could cause power failures. At the Mercedes-Benz Energy test lab in Kamenz, the project partners have now shown that automobile battery storage systems can respond to a changing frequency in less than 100 milliseconds. This means they can replace the inert masses in large-scale power plants.

The project partners have also shown that battery storage systems can be used to start up energy generating assets and even entire power stations, for example after a large-scale power failure. 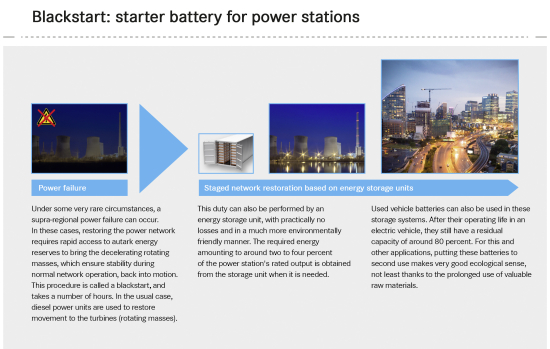 Today, diesel power units are used to restart turbines (rotating masses) in power stations and to supply power to auxiliary units. The development study shows that this can also be done with battery storage systems with virtually no losses and in a process that is much better for the environment.

In the next phase of the development partnership, the project partners will work together to define the requirements that will enable a tender process for the future system service by TenneT.

specifically for a black start in power plants and to support mass inertia.

They can only do this if they are plugged in.  The only way this works is if most parking is wired for charging and vehicles use it most of the time.  Fast chargers are a destabilizing influence.

EVs and/or solar homes equipped with bi-directional charging units could remain plugged in and in sync with the local grid. On demand contribution to the grid could easily be regulated with fixed limits to protect the EV batteries and ensure that the private EVs are recharged outside peak demand hours (at a lower rate). Of course, all energy drawn from private solar homes and private EVs would be paid (or credited at) a much higher rate.

Eventually, as PVs performance is increased up to and above 40% and cost per watt lowered, well designed solar home, in sunny places, could balance the energy needed.

Power Co. could used EV batteries to do part of the stabilizing work?