The V2G testing center is part of Austin SHINES, an Austin Energy project that is testing how energy storage at grid, commercial-, and residential applications-scale to help increase the penetration of solar energy to reduce peak demand, increase grid resiliency and achieve the City of Austin’s renewable energy and storage goals by 2027.

As electric vehicle sales increase, more and more families have an energy storage system parked in their garage. V2G technologies allow us to unlock the potential of EVs for cleaner transit and a cleaner grid.

Deployed throughout a service area, V2G technology could allow utilities to knit together electric vehicles to act as a virtual, on-demand power plant. Paired with the increasing penetration of residential roof-top solar, EVs can become a viable source of clean, dispatchable power for utilities during peak demand periods. 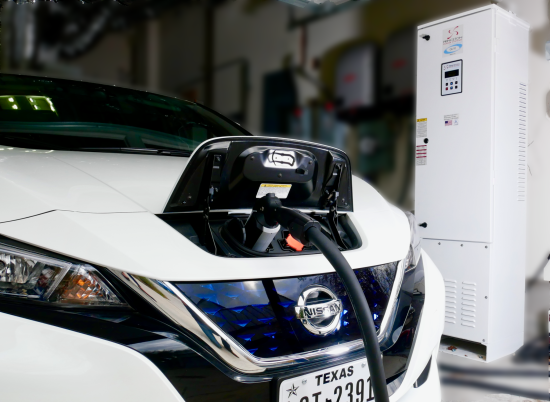 New grid-tied V2G equipment installed at Pecan Street’s lab in Austin, TX. Pecan Street’s V2G testing center is part of the Austin SHINES project and is the first in Texas.

Pecan Street estimates that each electric vehicle connected to this kind of dispatchable system could power a home for two to five hours or power up to five homes for about an hour each. Shaving peak power demand during the highest few hours of electric use has significant benefits on electric system costs, rates and emissions reductions.

Electric vehicles can be more than emission-free transportation. Home storage and EVs can become valuable grid assets that help meet clean energy and energy affordability goals if utilities can efficiently integrate them and incentivize consumers to participate in peak-shaving programs. Through our unique partnership with Austin Energy, Pecan Street is developing, testing and proving the hardware and software innovations that will allow V2G systems to go mainstream.

Homes equipped with extended range EVs and PVs could contribute positively to stabilize and feed the local grid with clean energy, specially during peak demand hours, and offset some of the initial installation cost, while allowing a higher percentage of clean REs usage and lowering pollution and GHGs.

Multiplied by a few million, many of the current polluting CPPs could be phased out of service.

That means, in the long run, for every EV owner that his battery degrades even quicker than normally expected. The higher the cycle rate (charge / discharge) the faster the battery reaches end of life. What is the price for charging and the price for V - Grid discharge? Who accounts for the charging losses for the higher cycle rate and premature end of battery?
Basically not a bad idea but will more than likely run at the expense of EV owners.

New technologies are coming for batteries with many more charge/discharge capabilities.

To protect current/early batteries, rate of charge/discharge can be controlled/reduced and operated within a limited range (25% to 75%) or (20% to 80%) to further extend life.

Using current battery traction systems, especially a Nissan battery, to shave electric power transfers the savings to paying for a replacement battery earlier in the cycle life. But, if you can get away with using a leased EV, that changes the money equation.