A novel ruthenium-based catalyst developed by researchers at UC Santa Cruz (UCSC) has shown markedly better performance than commercial platinum catalysts in alkaline water electrolysis for hydrogen production. The catalyst is a nanostructured composite material composed of carbon nanowires with ruthenium atoms bonded to nitrogen and carbon to form active sites within the carbon matrix.

As described in an open-access paper in the journal Nature Communications, The catalyst shows a he catalytic performance is markedly better than that of commercial platinum catalyst, with an overpotential of only −12 mV to reach the current density of 10 mV cm-2 in 1 M KOH and −47 mV in 0.1 M KOH.

Hydrogen evolution reaction (HER) plays a significant role in electrochemical water splitting for clean and sustainable hydrogen energy. In practice, room-temperature water electrolysis can be performed in both acidic and alkaline electrolytes, where platinum-based nanoparticles generally serve as the catalysts of choice. Whereas numerous studies have been carried out in acid, the high cost of proton exchange membranes as well as the sluggish electron-transfer kinetics of oxygen evolution reaction in acidic media have greatly hampered the widespread applications of acidic water electrolyzers. Such issues can be mitigated when the reactions are carried out in alkaline media, where HER involves three key steps …

… alkaline water electrolysis come with a significant disadvantage of its own, which is the markedly diminished HER electron-transfer kinetics catalyzed by platinum (about two orders of magnitude lower than that in acid). Thus it is of both fundamental and technological significance to improve the performance of Pt-based HER catalysts6 or develop viable alternatives that are of low cost and high performance for HER electrocatalysis in alkaline electrolytes (e.g., transition metal oxides, chalcogenides, and phosphides). Toward this end, non-platinum noble metals, such as ruthenium, rhodium, palladium, and iridium, have also been attracting particular attention because of their apparent performances. Of these, ruthenium, in the form of nanoparticles, alloys, and oxides, has been found to display an HER activity that is comparable to that of commercial platinum catalysts in alkaline solutions.

… Herein, we prepared a nanocomposite based on ruthenium and nitrogen codoped carbons and examined the impacts of both ruthenium nanoparticles and atomic ruthenium sites on the HER performance. 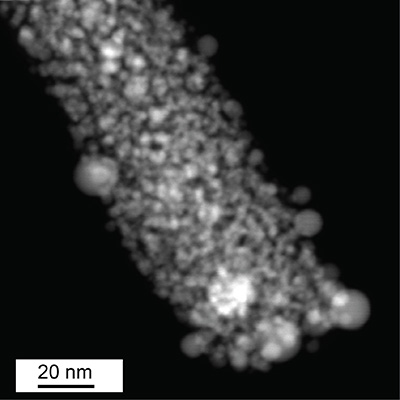 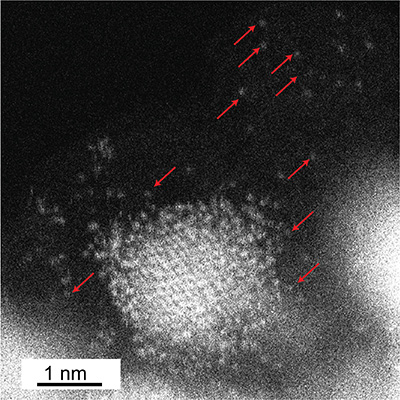 That was a breakthrough, because many studies have attributed the catalytic activity to ruthenium nanoparticles. We found that single atoms are the dominant active sites, although both nanoparticles and single atoms contribute to the activity.

Chen said he has filed a patent application for the experimental preparation of ruthenium-based catalysts. He noted that, in addition to potential applications for hydrogen production as part of sustainable energy systems, alkaline water electrolysis is already widely used in the chemical industry, as is a related process called chlor-alkali electrolysis for which the ruthenium catalyst could also be used. Thus a large market already exists for cheaper, more efficient catalysts.

In future work, the researchers will seek to maximize the number of active sites in the material. They may also investigate the use of other metals in the same nanocomposite platform, he said.

This research was supported by the National Science Foundation and UC Santa Cruz.

'… alkaline water electrolysis come with a significant disadvantage of its own, which is the markedly diminished HER electron-transfer kinetics catalyzed by platinum (about two orders of magnitude lower than that in acid). '

So bettering platinum based catalysts in alkaline solutions unless it is by a massive margin would not seem to help much.

Some idea of 'how much better' is not given.