In 2018, global deployment of nickel, graphite, copper, LCE, aluminum and cobalt by passenger vehicle cell suppliers increased by 75% to 99% versus the year prior, according to data from Adamas Intelligence’s “EV Battery Capacity and Battery Metals Tracker”. 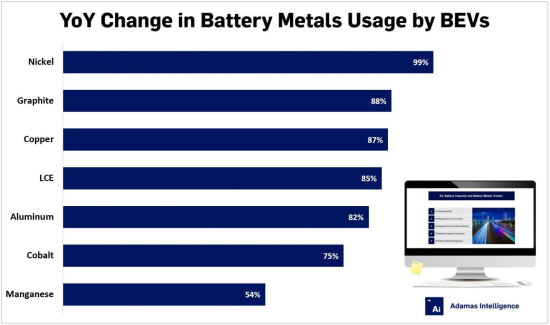 These growth rates are particularly remarkable when considering that global BEV registrations increased by a lesser 67% over the same period.

Other metals/materials, such as graphite, copper, LCE, aluminum and cobalt, saw growth above the BEV baseline due in large part to a steady increase in average battery capacity per BEV, which is in parallel fueling greater metals usage per BEV. 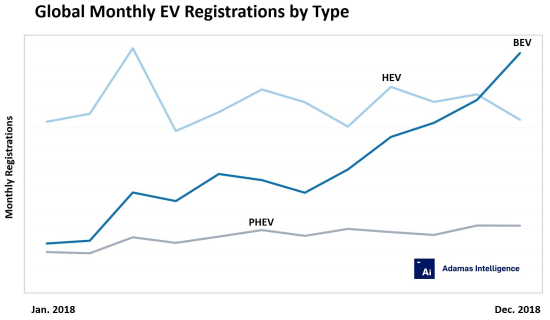 At the global level, the sales-weighted average EV battery capacity has increased by a factor of 18x in nine years, from 1.4 kWh in January 2010 to 24.8 kWh in December 2018.

Looking ahead, the ongoing rapid increase of average battery capacity, coupled with explosive EV demand growth, is poised to create an unprecedented surge of demand for battery metals and materials over the coming decade.

It is evident that electrified vehicles are rapidly getting/using batteries with much larger capacity to increase e-range. This trend will be maintained until an average range of 500+ Km is reached.

More batteries often means more of the above mentioned materials but a switch towards nickel seems to be taking place. However, new technologies will/may use other (lower cost) materials and in lesser quantity for each kWh.

Lithium (Li), Magnesium (Mg), and Aluminum (Al) are members of the same family. Both, Li and Al have the same no. of shells (3) but Al has 3 valence-electrons whereas MG only has 2 and Li only one. Lithium has only 2 shells and - as an Ion - is the smallest and lightest of all three.
Theoretically, Li has the lowest energy density of all three because it can donate and accept only one valence electron. However, being the smallest of the trio, it can manoeuvre through an electrolyte (organic or solid) much easier than the other two.
Both, Mg and Al, have a far higher energy density than Li because Mg and Al have more valence electrons than Li. Mg is far less volatile than Li and has other advantages than Li. Li is the easiest of the three to be implemented as a storage cell with all other advantages and disadvantages when compared to the other two. The easiest way is not always the best way to reach a certain goal.
E. g., Mg could be utilized as a full metal electrode without encountering all those problems unavoidable with Li. Mg poses other problems to be solved but these can certainly be overcome. A full metal Mg-electrode would allow an energy density that is twenty to thirty times higher than a meager Li-graphite electrode of the same volume. Al would offer the highest energy density of all three as a full metal electrode but would also require an immense effort to achieve a satisfying goal.
It is pleasing to know that a few OEMs are beginning to concentrate their R&D efforts in the direction of Mg.