In a series of tweets on Friday, Nikola Motor, developer of heavy-duty hydrogen-electric trucks, said that it will introduce all-battery versions of the Nikola Two and Nikola Tre models at Nikola World in April. (Earlier post.) 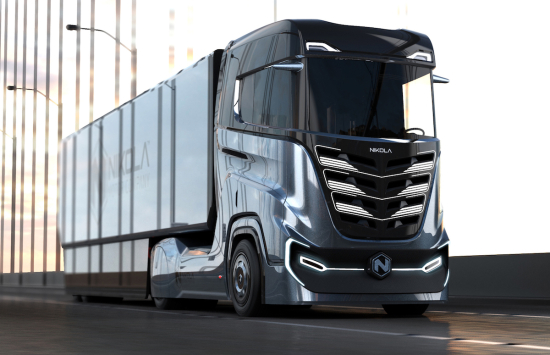 The battery-electric trucks will be available in 500 kWh, 750 kWh and 1,000 kWh configurations. The company is positioning the all-battery versions for short haul, while the hydrogen fuel cell versions are targeted for long haul.

The Nikola One will, for the moment, remain hydrogen only, as it is targeted for long-haul operations, being equipped with a sleeper cab.

We will see 50:1 more hydrogen orders but [for] some applications BEV works great.

As a comparison between the two powertrains, Nikola said that:

ICE is enemy, not hydrogen or BEV.

Why not make a 100-200 KwH version with a 500Kw diesel generator.
Use the batteries to get out of town, and then switch to diesel.
Make sure you have decent pollution control for the generator (Nox and Particulates).
+ you always see those skirts on high efficiency demo trucks and never on real trucks - is that because they are too much of nuisance in real usage ?

@mahonj,
A diesel PHEV is a good idea. However, Cummins seems to have that covered very well. Cummins acquired Efficient Drivetrains, Inc. (for the electric drivetrain) and Brammo (for the battery packs) and has shown a functional Kenworth T370 utility truck at the IAA Commercial Vehicles Show in Hannover, Germany last September.

My personal opinion is that fuel cells may be a reasonable short term solution for long haul trucking and other relatively energy intensive applications. Longer term, if we get 10 C charging and double the energy storage of the some of the best currently available batteries, batteries alone will be sufficient. Batteries are already good enough for short haul and local delivery and this announcement from Nicola seems to acknowledge this. The fuel cell version and the battery electric version may need the same power for propulsion but once the efficiency of generating the hydrogen in added in, the battery electric version is about twice as efficient.

Interestingly, Nicola was in the same building that my company moved into so they would have been our next door neighbor but they were moving out when when were moving in. However, I did get to look over their prototype.

Batteries for short haul and hydrogen for long haul?
There is an idea being tested that could make the need for hydrogen moot and cut into the need for the largest battery packs.
https://www.digitaltrends.com/cars/ehighway/
https://new.siemens.com/global/en/products/mobility/road-solutions/electromobility/ehighway.html

In the near future charge stations made up of solar/wind/wave energy devices and a large storage battery will be used to fast charge semi trucks. That removes the fast fueling advantage hydrogen has over batteries.

Originally Nikola were going for a BEV solution, then found they needed hydrogen for long range.

In a commercial application the up to 41% range reduction in cold weather for BEVs is also more than a touch inconvenient.

Fans may want batteries for everything, but in the real world sensible engineering finds solutions fitted to the application.

And fuel cell costs are dropping a lot faster than batteries.

The "Original Concept" proposed by Nikola Motors was a Gas Turbine/Natural Gas truck. Trevor Milton Nikola Motors President and CEO was the CEO of dHybrid Systems, LLC a natural gas storage technology company. So he had significant knowledge of Compressed Natural Gas systems for trucks. However, potential customers were not interested.
The Nikola One and Nikola Two are essentially Range Extended Fuel Cell Vehicles having a 300 kW Fuel Cell with a 240-320 kWh battery that is significantly larger than any other FC truck, e.g. the Toyota Truck has 230 kW Fuel Cell and a 12 kWh battery.

Thanks for that info, gryf

My understanding is that the big battery in the Nikola is to enable any terrain work.
Toyota is much more making a truck to suit certain applications, ie if there are extensive long upgrades, then stick to diesel.

These people are thinking inside the box, with the vehicle as a stand-alone replacement for current heavy trucks.

Think instead of a 250 kWh truck with an electric range of 100 miles, conductive charging lanes on the road every 60 miles, and Enevate cells which charge to 80% in 5 minutes.  Putting an 80% charge in a 250 kWh battery in 1/12 of an hour is 2.4 MW, which is easily handled by current electric railroad technology.

We HAVE the solutions already.  We just have to recognize them and put them to work.

There are always conditions outside the box. While we have solutions, they are not in place today.
The bird in the hand is worth two in the bush analogy matters even when the imperative is to cut greenhouse gas emissions.
The hydrogen highway and the electric highway are still a gleam in the eye. Both have merits as described by the previous posts.
I noted the govt comment that H2 (or as ammonia ) is complimentary with high renewable grid when oversupply when the sun shines and the wind blows.
I would be happy to see the necessary battery weight reductions described that in combination with good economics could negate a the demand for the less efficient H2 option in most applications.
Realistically although both share many details that are not yet production ready and if they were the urgency cannot be overstated.
In this two horse race and we can expect both to be winners.


I noted the govt comment that H2 (or as ammonia ) is complimentary with high renewable grid when oversupply when the sun shines and the wind blows.

People keep touting this as "the" solution, but the implementations are coming very slowly and NOBODY dares to talk about the LCOE from these things.  The figures being touted from e.g. Japan are so low compared to historical data that I can't take them seriously.

Future 1000+ Wh/Kg ultra quick charge, lower cost, cold weather resistant, longer lasting batteries may solve the problem but they may not be around until 2030/2040 while FCs are here.