Study: gasoline is more important than healthcare for Americans

Americans collectively spent $388 billion on gasoline in 2018, averaging to 34 million fill-ups a day. According to a study by GasBuddy, a smartphone app connecting drivers with the Perfect Pit Stop, the necessity, perception, and price of gasoline adversely impacts Americans across all age groups and income brackets, with 86% of Americans depending on gasoline for their everyday lives.

The study found that respondents categorized gasoline as a household expenditure that is more important than other major expenses such as healthcare and savings/emergency funds, only behind groceries, housing/rent, and utilities. When given the choice, respondents would rather receive a free fill-up than find $20 cash on the street or getting their dinner bill paid for. 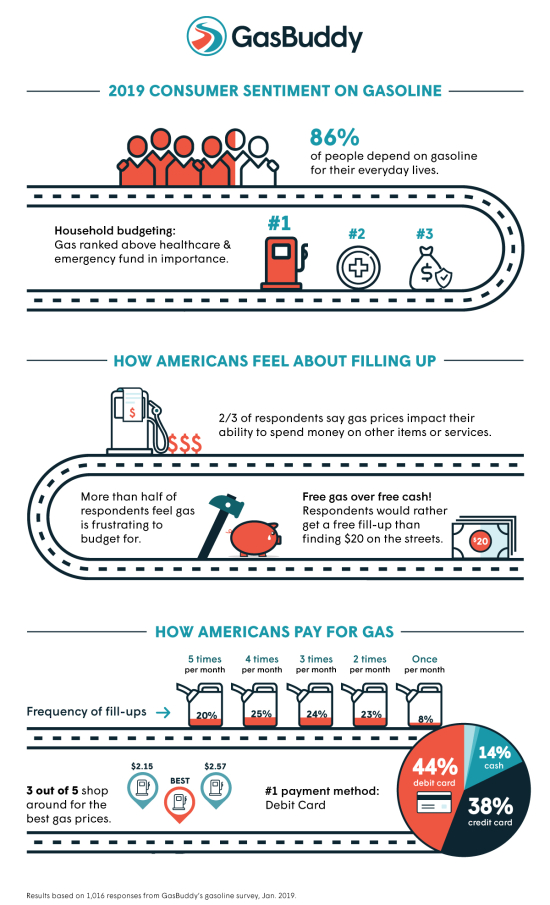 Gas prices are extremely volatile and hard to predict, making it difficult to budget for. Yet, it is a major necessity for millions of Americans. In 2018 we collectively spent $49 billion more on gasoline than 2017. People, no matter their age, gender or socioeconomic background, are not only frustrated by how much they pay but the options they have in how to pay.

According to the study, 25% of respondents purchase gasoline four times per month, with an additional 20% purchasing gasoline more than five times a month. The leading payment method is with a debit card (44%). Even with the rise of cash-back credit cards, only 38% of consumers pay for gasoline with credit, while 14% of Americans pay with cash.

GasBuddy compiled results from a gasoline survey taken by 1016 respondents on 8 January 2019.

You only need healthcare when you are sick, but if you have to drive every day to do almost anything (in the US), you can see why gas is so important.
+ I am sure it costs > $20 to fill your tank, so why would any car owner chose the cash?

Given people's frustration with the price of gasoline, the lack of popularity of PHEVs is perplexing.

@EP, I suppose the problem is the price of PHEVs - I agree that they are a very good solution to electric drive and occasional long runs, but I imagine that the people who really care about the price of gasoline can't afford them.

Given that the people who are most cost-sensitive mostly buy used vehicles (coming off 2-year leases and such) the solution may be to slap fuel consumption limitations on the first 25 miles of travel for vehicles above a certain list price.  The only way to meet those limits will be to go hybrid or PHEV, and those vehicles will start showing up on the secondary market a couple years later.

That would also help get rid of the market for gross excesses like Escalades and Navigators.

Addiction to gas and ICEVs has been building up for the last 120 years or so.

Ultra light weight vehicles (1000 lbs) for 4, could be an acceptable solution for the majority, with few 500 Wh/Kg batteries to accelerate and recover energy while decelerating and a very small 15 to 20 KW FC to keep batteries charged, while driving up to 100 kph.

People buying 5000 lbs/ 600 HP bullets capable of 200+ kph would not be interested but they may not be the majority.

Someone could make a Markov chain generator that would stand in for AlzHarvey and his non-sequiturs.  Not only would it be cheaper, it would work on weekends (notice that he doesn't?)

SAEP is at it again? What a pain?