California Governor wants to pull the plug on the state’s full high-speed rail project; Merced-Bakersfield instead

In his State of the Stateaddress, California Governor Gavin Newsom called for the state to abandon the state’s full high speed rail (HSR) project, which would run from San Francisco to Los Angeles, and ultimately from Sacramento to San Diego. Instead, Newsom wants to commit just to the more feasible Merced to Bakersfield segment.

In November 2018, the Auditor of the State of California released an audit report that concluded that the High-Speed Rail Authority’s flawed decision making regarding the start of high-speed rail system construction in the Central Valley and its ongoing poor contract management for a wide range of high-value contracts have contributed to billions of dollars in cost overruns for completing the system.

The Authority has partially offset Central Valley cost overruns, as well as those projected elsewhere in the system, by planning to share existing rail infrastructure where possible. However, the Authority acknowledges that it has identified every feasible option to do so and therefore cannot continue to use this approach to offset costs. Moreover, despite its challenging financial situation, we determined that the Authority has failed to implement sound contract management practices. As a result, it cannot demonstrate that the large amounts it has spent on its contracts have been necessary or appropriate.

The California Legislature created the California High-Speed Rail Authority —the state agency responsible for planning, building, and operating the system—in 1996. Voters did not approve major funding until 2008, when they authorized $9.95 billion in general obligation bonds, $7.5 billion of which is for the system’s planning and construction.

Two years later, the Authority received $2.6 billion in funding through the American Recovery and Reinvestment Act (Recovery Act) to begin planning and construction. In 2011 it received an additional $929 million in federal grant funding, bringing total federal support to $3.5 billion. The Authority receives 25% of the revenues from the State’s cap-and-trade program, resulting in $1.7 billion as of December 2017. In total, the Authority has secured $12.7 billion in funding and identified up to $15.6 billion in possible future funding.

The Authority expects this funding will be sufficient to complete initial segments of the system between Madera and north of Bakersfield and between San Francisco and Gilroy, but not to connect those segments or finish the rest of the system between San Francisco and Los Angeles. Its most recent cost estimate for the larger system, which it presented in its 2018 business plan, is $77.3 billion. 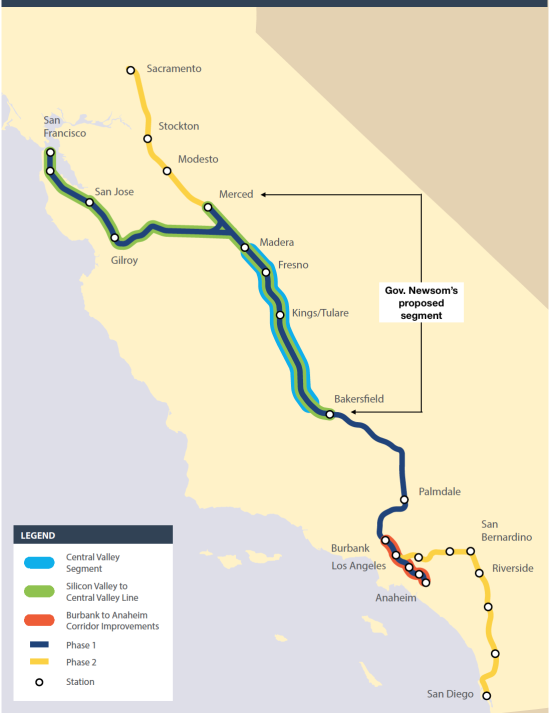 … let’s be real. The project, as currently planned, would cost too much and take too long. There’s been too little oversight and not enough transparency. Right now, there simply isn’t a path to get from Sacramento to San Diego, let alone from San Francisco to LA. I wish there were. However, we do have the capacity to complete a high-speed rail link between Merced and Bakersfield.

I know that some critics will say this is a “train to nowhere.” But that’s wrong and offensive. The people of the Central Valley endure the worst air pollution in America as well as some of the longest commutes. And they have suffered too many years of neglect from policymakers here in Sacramento.

Newsom wants to align economic and workforce development strategies, anchored by High-Speed Rail, and pair them with tools such as opportunity zones to reinvigorate the Central Valley economy.

Look, we will continue our regional projects north and south. We’ll finish Phase 1 environmental work. We’ll connect the revitalized Central Valley to other parts of the state, and continue to push for more federal funding and private dollars. But let’s just get something done.

For those who want to walk away from this whole endeavor, I offer you this: Abandoning high-speed rail entirely means we will have wasted billions of dollars with nothing but broken promises and lawsuits to show for it. And by the way, I am not interested in sending $3.5 billion in federal funding that was allocated to this project back to Donald Trump. Nor am I interested in repeating the same old mistakes.