As part of the eWayBW project, commercial transport will be electric on the B462 federal road around Rastatt with the test operation of catenary trucks as of 2020. On an approximately 18 km long pilot track on the B462, three sections with a total length of almost 6 km will be electrified. 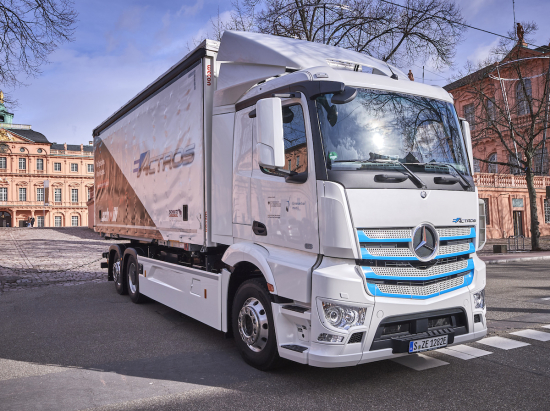 While preparations for the construction of the necessary infrastructure are still ongoing, at a cost of some €17.6 million (US$20 million), the eActros is mobile with its battery-electric drive, fully flexible and in need of only minimal infrastructure; nothing more than a charging station, Mercedes-Benz Trucks points out.

Daimler has taken the position that due to the high infrastructure costs involved, the company does not see potential in overhead lines at present; also in view of the rapid development of battery and fuel cell technology.

From spring of this year, Logistik Schmitt will be operating the eActros in place of a conventional diesel truck as part of a field test transporting transmission housings. The eActros will be tested on an around 7km stretch in a demanding three-shift system between Logistik Schmitt’s warehouse in Ötigheim and Rastatt's Mercedes-Benz Gaggenau plant. The daily tour of the 25-tonne truck totals around 168 kilometers.

This represents the kick-off to a series of eActros field tests taking place over several years in the Murg valley and the surrounding region. As a next step, comparative tests with the catenary project will be carried out with an advanced version of the eActros as a semitrailer tractor variant with higher tonnage and range.

Our eActros has been out on public roads since June 2018 and has already covered more than 30,000 kilometers with its battery-electric drive. Together with customers, we have been compiling experiences of the eActros in regular everyday operations since September. Its range of 200 kilometers has proved to be absolutely realistic. The eActros completes its transportation tasks regardless of the route or other factors. The expenses involved in installing one charging station at each customer’s premises is comparatively low. There is every indication that we are on the right track with our eActros concept. Our aim as of 2021 is to have locally emission-free and quiet heavy-duty series production trucks operating in cities—operating economically on a par with diesel trucks.

We are delighted that Logistik Schmitt will now use the eActros and are excited about further interesting findings gained from practical operations.

In the first phase of the eActros test operation, Logistik Schmitt is integrating a vehicle with a swap body into the company fleet. The eActros transports up to twelve tonnes and drives twelve tours a day. The batteries in the eActros are charged also while the vehicle is being loaded or unloaded so that the total 200-kilometer range of the eActros can be optimally used. Initially the vehicle will be charged using a mobile charging station. 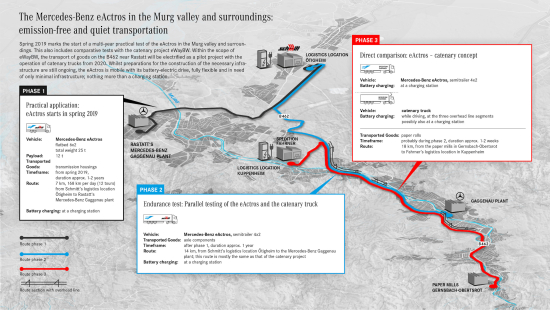 Second phase: parallel testing with the catenary truck. As of the second phase of the eActros project in the Murg valley, the 25-tonne truck from the first phase will be replaced by an advanced version of the electric truck in form of a semitrailer tractor unit.

Using the eActros semitrailer, Logistik Schmitt will deliver axle components along the 14 kilometers from the warehouse in Ötigheim to the Mercedes-Benz Gaggenau plant—mainly via the B462. This route is, for the most part, the same as that for the catenary project.

The specifications of the eActros semitrailer truck will be comparable to those of the overhead catenary trucks, among other things in terms of the higher tonnage and range. This parallel testing of the eActros and the catenary trucks will take place for approximately one year and will deliver data and findings necessary for comparing both concepts, e.g. in what way the vehicles are suitable for this operation.

A conventional diesel Actros equipped to the Euro VI emissions standard and fitted with measuring equipment will serve as a neutral starting point for the comparison of the concepts and will drive along the overhead-lines route. It will then be possible to compare the energy consumption of the electric trucks—battery-electric and catenary—with the consumption of the diesel truck.

The eActros is based on the frame of the Mercedes-Benz Actros. Beyond that, the eActros uses an architecture based entirely on electric drive with a large proportion of specific parts. The drive comes from two electric motors near the wheel hubs on the rear axle. Their output is 126 kW each, and the maximum torque is 485 Nm each. Downstream of the transmission that equates to 11,000 Nm each. The driving output is therefore on a level with a diesel truck.

The maximal permitted axle load is the usual 11.5 tonnes. The energy is stored in lithium-ion batteries with a capacity of 240 kWh. Depending on the available charging capacity, a full charge takes between two and eleven hours (at 150 or 20 kW respectively).

Hope that nobody will use ugly overhead lines to extend range of e-trucks-e-buses-e-trains. FCs can already do the job with a few clean H2 stations.

Hypedrogen is the one thing NOT being tested here.  It's simply not in the running; the trillion-dollar investment it requires is too much.

Hydrogen, especially for large volume commercial applications will NOT require a trillion dollar investment. Certainly the investment will be less than overhead electrification on roadways or even mass BEV high speed charging stations for commercial vehicles. It is a fluid fuel, albeit a more difficult one than methane or liquid fuels after all with all the attendant benefits that confers.

As the material resource issues of batteries start to rear their ugly head and become increasingly apparent, we are now hearing of 100 MW electrolyzer plans in Germany, coal to hydrogen in Australia, etc. etc. Yes, H2 is inefficient, but it is flexible, comparatively portable and is more efficiently transported than electricity.

What a load of BS! H2 is terribly inefficient! A HVDC transmission line is the most efficient implementation to transmit power.
Hydrogen gas occurs in molecular form; it is the smallest molecule of all elements and will diffuse through any other substance. It cannot be restrained from concrete, glass, ceramic, SSt nor any other material. The only material that can prevent H2 from diffusion is Graphene because the atomic bonds of the hexagonal structure is so small that H2 cannot pass through those gaps. A graphene liner within a carbon reinforced containment would offer a partial solution only because e.g. the valve seat for injection / extraction would not prevent H2 from diffusion.
The higher the storage pressure the faster H2 will diffuse!
The overall system efficiency ("well to wheels") of H2 is below that of the miserable balance of hydro-carbons.
Please don't repeat "fake news" initiated from "Big Oil", their advocates or vassals.

H2, once produced IS more efficiently transported than electricity. That is not up for debate. It is easy to calculate. It costs around 1% of the energy content of H2 to move it 1,000 or more miles in a pipeline, more in a liquid tanker but nowhere near the average 7% loss in electricity transmission and distribution and even more if you are talking distances greater than 1,000 miles.

Even just looking at HVDC transmission and not including distribution, you lose between .5% to 1% of the energy per 100 miles of line. There is no fluid fuel, including hydrogen whose transportation is that energy intensive. This includes the necessary compression for transportation by the way. Even for coal, not a fluid fuel, it gets interesting as distances get farther where rail or barge transportation costs beat direct electricity transmission. I know for example that coal from the Powder River area in Wyoming is shipped as far as Central Florida , almost 2,000 miles as I have seen those trains with my own eyes and I m pretty sure no Wyoming electricity gets to Florida.

I will repeat it again and do so loudly. An battery electric dominant system cannot work if you require flexibility in your energy system. You trade efficiency for flexibility which is even more important in an national energy system.

we are now hearing of 100 MW electrolyzer plans in Germany, coal to hydrogen in Australia....

Guess which one of these has the better chance of commercial success?  (Hint:  the one powered by fossil fuel.)

Not that some gasification wouldn't be good for the ol' USA.  A lot of refineries have petcoke piling up after the EPA tightened emissions regulations and made it impossible to co-fuel with coal.  Gasification would be a great way to get rid of the stuff.  Wabash River unit 1A in Terre Haute is burning it just fine, but it doesn't have enough of an appetite to deal with the amount being produced.

I guess it too muich to expect a trillion dollar investment for hydrogen when a trillion dollars over the next ten years is exactly what is earmarked for upgrading the nuclear arsenalglobally.
Decisions decisions - what to spend all thay money on ?