YASA, a leading manufacturer of axial-flux electric motors and controllers, signed a long-term joint innovation agreement with a global automotive OEM. The partnership will focus on developing custom electric motor and controller solutions for the OEM’s high-performance hybrid and pure electric vehicles.

The Yokeless And Segmented Armature (YASA) topology is a type of axial flux motor that has no stator yoke, a high fill factor and short end windings which all increase torque density and efficiency of the machine. The topology is based around a series of magnetically separated segments that form the stator of the machine. The novel design is enabled by using powdered iron materials that enable complex magnetic parts to be manufactured easily. (Earlier post.) 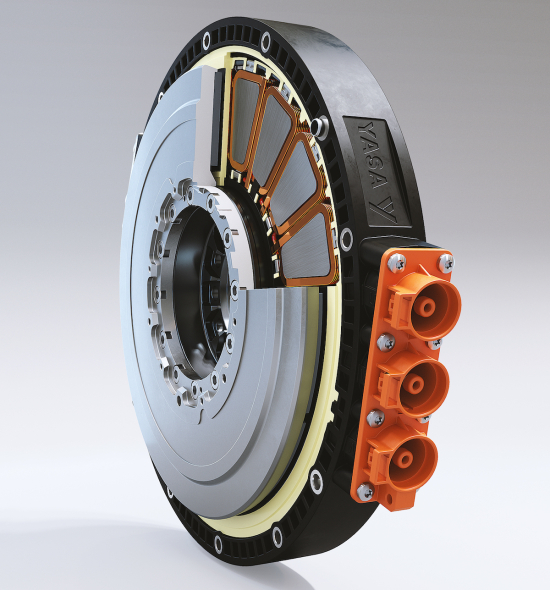 The YASA 750, YASA P400 Series and YASA 400 axial flux motors achieve power densities of up to 10kW/kg and torque densities which are significantly better than the nearest competitive motor topology. The axial flux enables high power densities to be achieved at relatively low speeds (2000-9000rpm).

Under the agreement, YASA and the OEM will work together to leverage YASA’s technology to improve vehicle performance while reducing vehicle weight.

In addition to automotive, YASA is also addressing the burgeoning electric aerospace market. Last month, the company announced partnering with Rolls-Royce to provide the electric motors to power the world’s fastest electric airplane, scheduled for launch in 2020.

Higher power density (10KW/Kg) and less materials will translate into much lighter, lower cost e-motors for e-vehicles, flying machines and many other uses.

Build it right into a gear box and you have a very small power train. Great even for motorcycles. Enticing!

Paroway:
Two small drive motors in the axles and you don't need a gearbox; electric drive trains are already pretty simple and with development drive trains will become ever smaller, less-costly, stronger and longer-lived.

Too bad and Ford decided wrongly on the internal explosion engine and Rockefeller's fossil fuel to power cars at the turn of the Century. Had Ford and Edison continued to develop the Detroit Electric EVs and battery technology, we might already be on Mars and also living on a much healthier Earth.

Praoway, you're right that the axial gap machine looks like a nice fit for motorcycles. As for tandem in an e-axle: the motor controller is really the volume challenge (for now), and having two of them stacked with a central e-axle is probably less satisfactory than moving them separately closer to the wheels. Hub motors will continue to be dreams, IMO, bcause of unsprung weight considerations, but locating at the "corners" has some merit.

Still... a proper differntial with one motor works fine right now, has considerable cost and weight advantage over two motors and can still package nicely.

Presently, in a world with subsidies or tax credits for EV's the world seems intent on providing higher-performance electric vehicles. In reality the genuinely-disruptive mass EV will, like its ICE forebears, have as little material (and cost!) on board as possible. Reality is that 25kW e-axle on one end and 75kW on the other end of a compact sedan (saloon) is plenty. 0-100km/h in <10 sec and 150km/h top speed would suit almost everyone just fine, with all the AWD capability needed for safe all-weather use. That's the only way we're going to see Corolla-equivalent EV competitors for similar price.

Henry Ford thought alcohol was going to be the fuel of the future, not gasoline.  Batteries were simply not good enough at the time.  There are century-old Edison cells still in use today, but their low energy density and high self-discharge rule them out for modern vehicles.

The battery is where the big cost is in an EV, not the motor(s).  Performance has always been the EV's strong suit, and you're not going to get customers to give it up.

If you can save 0.10 on an auto component, you do, or you go out of busness.
EVs have yet to be fully commoditized, and if you really think they'll replace ICEV then you'd best hope so. Example: Ford builds the complete 1.0L EcoBoost and standard tarnsmission package for less than Eu800 complete., all up ready for installation, and similar (slightly lower power and quality) versions pour out of china fora bit more than half that. Gas tanks and fuel and exhaust systems are cheap. Right now you can't get that 50kW e-axle for a few hundred Eu, and the batteries add to the challenge.

If you really expect the Tony Seba world of ubiquitous EVs they won't be the nicely-appointed, garaged and pampered cars that most EVs are today. An EV manufacturer striving for <$20K MSRP (todat economincs) will shave cost wherever it can be shaved. A future affordable EV with all the convenience and reliability of modern ICE with present-day Sentra/Elantra/Corolla base performance, parked on the street and getting virtually no maintenance, will not be high-performance. And this mainstream customer can't tolerate all the excuses we make today for BEVs (such as cold range issues) or fall back on additional family cars that virtually all EV owners curretnly possess when charging issues get in the way. The compromises on this yet-to-be-achieved cheap, common, marginally profitable and utterly convenient car haven't been determined yet, but cost targets abound and extra, unneccessary motor shaft output will fall away quickly.

Yes Herman, a basic electrified VW would be ideal to go from A to B (to work-school etc) but batteries' cost would have to be reduced to about $50/KWh plus lower cost essential components and low cost assembly made with efficient low cost workers.

India, China, So-Korea, Brazil, Mexico, Turkey and a few other countries have the potential, knowhow and workforce required but who is willing to pour $100+B into such a worthwhile endeavour? Ten of the world multi-billionaires (coupled with 2 or 3 car makers for knowhow) could do it but they have other things to do to increase their fortunes.

Yet carmakers put electric windows, heated power seats and moon roofs into all kinds of vehicles.  They could save money by leaving them out, but they make money on them.  How?

Customers demand them, that's how.

A future affordable EV with all the convenience and reliability of modern ICE with present-day Sentra/Elantra/Corolla base performance, parked on the street and getting virtually no maintenance, will not be high-performance.

Customers are not going to put up with a 50 kW electric answer to the Trabant when the same battery will easily feed a 150 kW motor that makes the car a lot more fun to drive.  Even the Nissan Leaf is sold based on performance.  Go ahead and try to market a 50 kW version of the car.  You will go broke.