The European Parliament and the Council have reached provisional agreement on a regulation setting, for the first time in the EU, strict CO2 emission standards for trucks. Under the agreement, emissions from new trucks will have to be 15% lower by 2025 and 30% lower in 2030 compared to 2019 emissions. 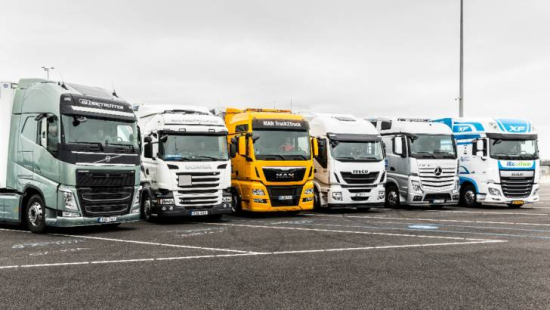 The deal follows an agreement reached in December on new CO2 emission standards for cars and light vans in the EU for the period after 2020.

Following this provisional political agreement, the text of the regulation will have to be formally approved by the European Parliament and the Council. Once endorsed by both co-legislators in the coming months, the regulation will be published in the Official Journal of the Union and will immediately enter into force.

With the first-ever EU emission standards for trucks agreed, we are completing the legal framework to reach the European target of cutting greenhouse gas emissions by at least 40% by 2030. The European Parliament and Council have reached an ambitious and balanced agreement. The new targets and incentives will help tackle emissions, as well as bring fuel savings to transport operators and cleaner air for all Europeans. For the EU industry, this is an opportunity to embrace innovation towards zero-emission mobility and further strengthen its global leadership in clean vehicles.

The European Automobile Manufacturers’ Association (ACEA) reacted to the agreement by noting that the reduction targets are “highly demanding, especially as their implementation does not depend solely on the commercial vehicle industry, and the baseline for the targets is still unknown.”

Earlier, ACEA had asserted that reaching such ambitious CO2 standards will only be possible with a rapid and massive market uptake of zero- and low-emission trucks.

We can now only call upon member states to urgently step up their efforts to roll-out the infrastructure required for charging and refuelling the alternatively-powered trucks which will need to be sold en masse if these targets are to be met.

ACEA said that a concern stems from the total lack of such infrastructure today. Data shows that currently there is no public charging or refueling infrastructure suitable for electric or hydrogen trucks whatsoever. Even in the case of truck-specific filling stations for natural gas (CNG and LNG), availability remains very low and patchy across Europe, the association said. 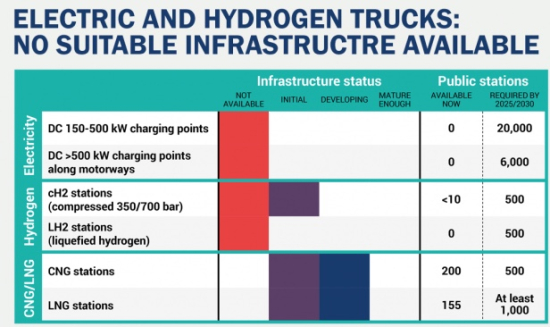 The need for the 28 national governments to implement an EU-wide infrastructure action plan is all the more urgent in light of the mandatory sales quotas for zero-emission trucks that the EU institutions have agreed to introduce from 2025 onwards (via the benchmark system), ACEA added.

The introduction of a benchmark system for truck manufacturers totally ignores the demand side. We cannot expect transport operators to suddenly start buying electric or other alternatively-powered trucks if there is no business case for them and it is not possible to easily charge the vehicles along all major EU motorways. Policy makers must act to ensure that the zero-emission trucks that manufacturers will be mandated to produce can actually be bought and operated by our customers.

Also, ACEA added, given that this is the first time the EU sets CO2 standards for trucks, it is “extremely worrying” that many supportive measures that could contribute to reaching the targets (longer vehicle combinations such as EMS, alternative fuels, etc) have been deferred until at least 2025.

Environmental NGO Transport & Environment (T&E) said the bloc’s first ever emissions reduction targets for heavy-duty vehicles and the sales benchmark for zero and low-emission trucks. However, T&E added, the legislation will need to be made more ambitious when it’s reviewed in 2022 to continue to drive down emissions in line with the Paris climate goals.

Trucks in Europe account for 22% of vehicle emissions while making up less than 5% of the vehicles on the road. Big businesses including IKEA, Unilever, Carrefour and Nestlé, as well as logistics companies and hauliers, had called for the CO2 targets and sales benchmark to help them address their climate responsibilities and make fuel savings.

They really need something like the Bladerunner dual-mode scheme.  Getting most of the ton-miles off the paved roadways and onto rails would slash the amount of pavement damage and also make it far easier to electrify the truck fraction of the freight system.  That would also make self-driving vehicles much easier to implement; no conflict with passenger cars, no problems with guidance except when switching tracks, built-in ways to sense the distance of the vehicles in front and behind by sending electrical pulses through the rails.  Making the trucks EVs or plug-in hybrids for the few remaining road miles would deal with the remainder.

Once electrified, the problem is getting zero-emission electricity where and as required.  "Renewables" are incapable of providing that.