A team from the National Renewable Energy Laboratory (NREL) has shown by modeling that the wafer cost of an emerging Ga2O3 wide bandgap semiconductor can be more than 3-times lower compared to SiC. This lower cost of the Ga2O3 wafers should lead to less-expensive high-performance power electronic devices in the future.

A paper on their work is published in the journal Joule. 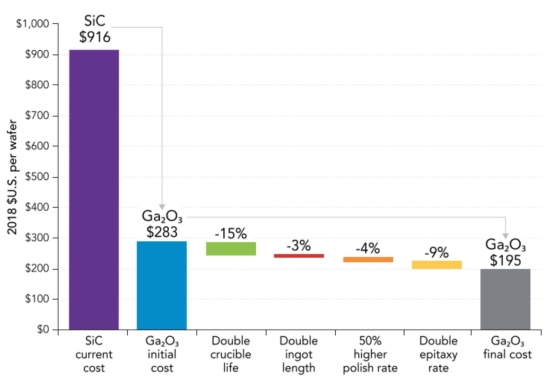 Modeled 6" wafer costs comparison for Ga2O3 and SiC wafers, and the Ga2O3 cost reduction potential. The Ga2O3 cost is >3x less compared to SiC and can be further reduced by better Ir crucible utilization and faster polishing and epitaxy processes. Reese et al.

Rough estimates using these numbers suggest that even modest loss reductions in present power electronic devices (5% absolute or 50% relative of peak efficiency) can lead to 1.5 quads of energy savings, sufficient to power a third of all homes in the USA. Furthermore, advanced power electronic devices may lower weights and volumes of the systems, thus incentivizing new applications, including alternative transportation and variable frequency drives.

… Power electronic technologies based on [wide bandgap] WBG semiconductors, such as silicon carbide (SiC) and gallium nitride(GaN), can be more efficient than Si due to their much higher breakdown field (Ec) at comparable dielectric constant (ε) and similar charge carrier mobility (μ). These WBG SiC and GaN semiconductors have 100x–1,000x higher figure of merit for power electronics (BFOM=ε μ Ec3), compared to the narrow-gap Si. … However, one remaining drawback of these WBG semiconductors is the higher cost of the single crystal substrate wafers compared to Si, both due to more complex crystal growth chemistry and the smaller scale of the crystal growth industry.

An emerging alternative WBG power electronic technology based on gallium oxide (Ga2O3) has the potential to address this cost performance trade-off by providing lower cost and higher performance compared to established WBG semiconductors.

To determine the cost of Ga2O3 wafers and compare it to the SiC wafer cost, the NREL team created a bottom-up cost model around a manufacturing process flow.

Among their findings, they estimated that the >3x cost advantage of Ga2O3 compared to SiC wafers could translate to 2x less expensive power electronic devices, assuming a similar device manufacturing process and similar device density on the wafer.